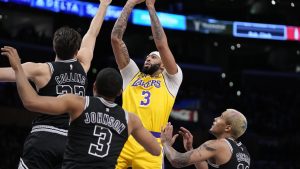 LOS ANGELES (AP) — LeBron James and the Los Angeles Lakers are starting to get key pieces of their lineup back as he makes his push toward becoming the NBA’s all-time leading scorer.

Anthony Davis scored 21 points in his return from a right foot injury and Rui Hachimura added 12 in his Lakers debut as they bounced back from a rough loss to beat the San Antonio Spurs 113-104 on Wednesday night.

Davis and Hachimura both came off the bench with 4:22 remaining in the first quarter.

“We were all figuring out ways we could mix and match. We just wanted to get guys in there,” Lakers coach Darvin Ham said. “With AD coming back and Rui being new, we had to work through some kinks. When we got settled into the game, guys had different runs.”

Davis, who missed 20 games due to a stress injury suffered during the first half of a Dec. 16 game at Denver, came in with 4:22 remaining in the first quarter. He was 7 of 15 from the field and also had 12 rebounds in 26 minutes for his 19th double-double in 26 games played this season.

Hachimura’s final stat line was nearly identical to his season averages in Washington: 12 points, 6 rebounds, 1 assist and 1 steal. That’s solid, especially in only 22 minutes, but one number stands out. The Lakers were a team-best plus-17 with Hachimura on the floor, which underscores the impact he made in his debut.

He did the little things: tipping loose balls, making the extra pass, rotating defensively when needed. Replacing a small guard (Kendrick Nunn) with another athletic player with size and scoring prowess made the Lakers more dynamic and versatile. Players are often on their best behavior when debuting for a new team, but the Lakers are confident they can unlock a more consistent and engaged Hachimura defensively and on the boards.

One interesting wrinkle with Davis’ return will be how coach Darvin Ham determines his frontcourt minutes. Davis and James are obvious locks for 30-plus a night. But the eventual group around them is unclear.

Newcomer Hachimura is expected to join the starting lineup at some point, as The Athletic previously reported. But then there’s also Thomas Bryant, who stepped up in Davis’ absence, averaging 15.5 points and 9.4 rebounds. That’s before mentioning Troy Brown Jr., Austin Reaves and Lonnie Walker IV, who have each logged frontcourt minutes consistently.

Ham has hinted he’ll try more lineups with Bryant and Davis together, which could push James and Hachimura to small forward more often, forming a bigger and more physically imposing frontline (while limiting the use of the Lakers’ three-guard lineups, which have struggled). But the Lakers’ coaching staff has a lot to figure out over the next few games.