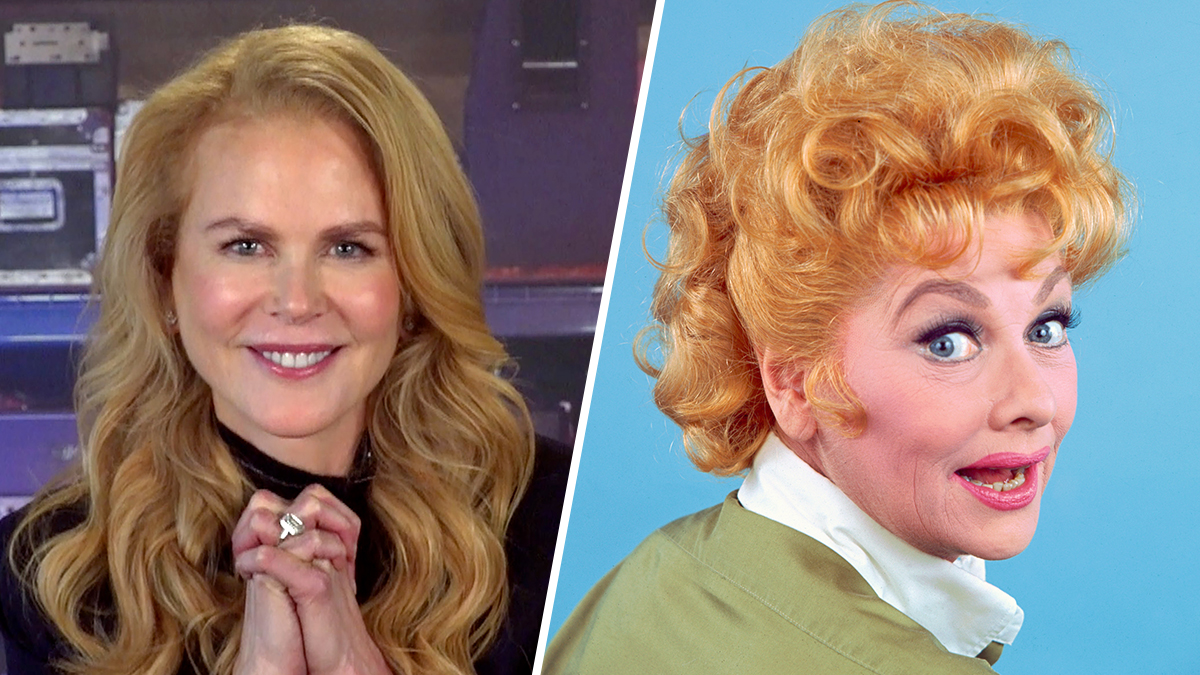 Once, the subway was a nickel, a man’s pants crotch was above the ground, a female’s boobs were inside her dress, the US was united and there lived Lucille Ball. Her husband, cheating Cuban bandleader Desi Arnaz. Company, Desilu. Longtime TV series “I Love Lucy.”

Amazon’s new movie about them — “Being the Ricardos” — had a screening. One door was Scotch-taped with paper saying Nicole Kidman. Out came Nicole — who plays Lucy — in a white floor-length gown. I asked, “Whose shmatta?” She grinned: “Chanel.”

Then: “Growing up in Australia I hadn’t much knowledge of Lucille Ball. No idea of their tumultuous married relationship. But I became obsessed with her. I loved dancing. She loved dancing. I saw in her the excess force, her tough unstoppable drive to make things work, forge ahead, become successful. Her resilience doing the doing and filming reminded me of my mother.

“She had bright red hair, so they dyed mine. I figured prosthetics would change my nose and mouth but the problem was eyebrows. I worried mine would be gone forever but they’re starting to come back.”

Writer/director Aaron Sorkin: “We filmed in LA. I read their biographies, most not very good. The best was Desi’s own ‘A Book.’ At first I didn’t care to do this because I didn’t want the usual biopic. There was too much difference in their characters. He, alcoholic. She accused of being a communist. And still loving Desi even after their divorce and her remarrying comedian Gary Morton.”

P.S. I knew both Gary Morton and Lucille Ball.

“Jim Gaffigan: Comedy Monster” is a new Netflix stand-up special on the 21st. Himself directed himself . . . Everybody’s doing specials, like Jennifer Aniston, Gabrielle Union and a partridge in a pear tree in front of a studio audience . . . So far no traditional Christmas party at the White House. Biden maybe ran out of Kleenex . . . Lacking a gift? How about let’s tell Fauci to go fauc himself. If we can’t get rid of the pandemic, let’s get rid of him . . . Viral Nation develops brands such as Campbell’s, Amazon, Disney. Founder Joe Gagliese: “TikTok, Instagram, Twitter affect crypto. Investing in the digital asset class, without prior research, is risky for newbie investors. In an unregulated space it’s important to do your own research.”

Opened in 1865, University Club still has the original members. It once threw me — and then-First Lady Hillary Clinton — OUT. Dec. 10, 1997, we were there opening Christmas gifts. Running late, I used my cellphone. Immediately, an antique statue lumbered over to croak “That ‘machinery’ is not permitted here.” Geezergate’s management then ordered me — and Hillary — to leave.

And at Margo’s b-day party the club barred one invitee. His sin? Wearing sneakers.

People say hostility in Congress was never greater. Wrong. Northern Republicans and Southern Democrats had fistfights in the House over admitting Kansas. Noses were bloodied and South Carolina speaker Jim Orr ordered the sergeant-at-arms to arrest them. Then a miracle. John “Bowie Knife” Potter, Wisconsin Republican, ripped the hairpiece off William “Big Bill” Barksdale, Mississippi Democrat. Both sides began laughing. The GOP won the vote and Kansas came in as a free state.

Christmas. Gratitude and thanks time. This man prayed: “God, I’ve had misery, bad luck and despair. My butcher never prays and he has health, prosperity, happiness. Why me, a believer who’s in trouble while that butcher’s doing so well?” A voice from the beyond: “Because he doesn’t bug me, that’s why.”