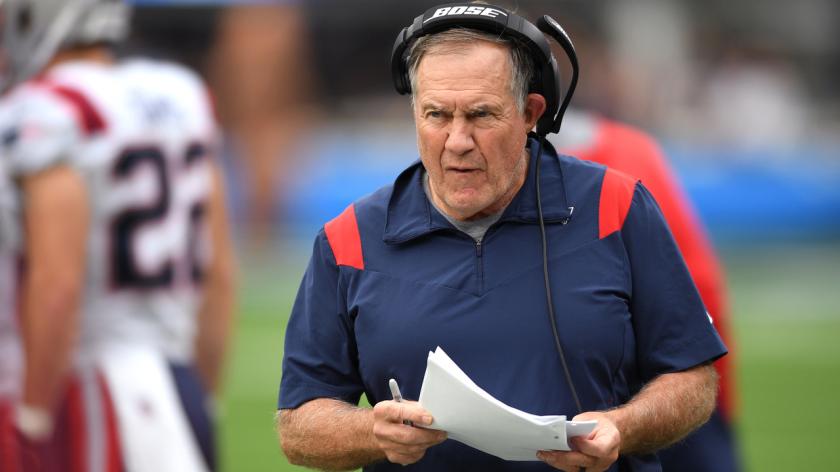 Daniel Jeremiah stumbled upon a gem a couple years ago. In the middle of some spring cleaning, he found a set of notes he was given during a “scout school” session during his time with the Baltimore Ravens. Now the lead draft analyst for NFL Network, they were notes Jeremiah was happy to rediscover.

Compiled by scout Dom Anile, who’d previously worked for the Browns under head coach Bill Belichick, the notes were dated Feb. 13, 1991. In those sentences and paragraphs chock full of scout speak were position-by-position traits of what Belichick wanted his staff to be looking for as their roster was built.

Jeremiah tweeted out the offensive notes and shared the defensive ones on his “Move the Sticks” podcast. We’ll lay out the podcast transcription at each defensive position for you here, then provide a player who fits the description.

One historical note before we dive in…

But in February of that year — when these notes were compiled by Anile — it looks like that front-seven decision hadn’t yet been made. In fact, the very day these notes were taken (Feb. 13) was the same day Saban announced he was leaving his post as Toledo head coach to join the Browns. Saban might not have been given the keys to the Cleveland defense just yet.

All that is to say that it seems as though Belichick had a 3-4 defense in mind when he held this meeting, detailed by Anile, with his scouts.

Also, in a 3-4 scheme, a defensive end is someone who generally plays over an offensive tackle and is built like Ty Warren or Richard Seymour — around 300 pounds with good length. Keep that in mind when we hit the “outside linebacker” and “defensive end” position groups below.

In the podcast, Jeremiah first read off some general defensive thoughts from the notes.

“Defense: Defend the middle of the field first. Do not allow offense to run or pass inside. Pressure on the QB up the middle. Force them to go outside. Make sure you have a third-down cover LB or sixth DB to match up on the (Eric) Metcalfs of the world, etc.”

Then the meeting shifted to desired positional traits.

Belichick wish list at defensive tackle/nose tackle
“DT/NT: Inside guys need explosive quickness and can play well in a fairly confined space,” Jeremiah said, reading from his notes. “Explode, power, quickness, leverage. If he’s big and has explosive quickness, it’s what you want. 4.8 speed is not the main ingredient. Size can be 275 and up if he has the other ingredients. Need a big, strong guy that you can bring in when you have to go across from the Munchaks and the Munozes.”

Jones carries his 327-pound frame incredibly well. If it’s “explosive quickness” the Patriots are looking for here, Jones has it. During the pre-draft process he clocked an extremely impressive 4.92-second 40 time (78th percentile) and a 7.33-second three-cone (84th) that was just insane for a player his size. Big. Strong. Explosive. Jones flashed all those traits at the Senior Bowl, where he was dominant. Georgia’s Jordan Davis fits here, of course, but he likely won’t be available when the Patriots pick. And Jones isn’t far behind.

Belichick wish list at defensive end
“DEs: All-around player. Big, strong and can run,” Jeremiah continued. “These are the hardest guys to find. Would rather have the big strong guy than the faster guy to stop the run first and can substitute in for the pass-rush. 1: You cannot get knocked off the line. 2. Size over speed at defensive end. 3. Pressure up the middle for the QB can cause more problems than guys running around the corner. 4. Frame and growth potential are very important.”

Last year, it was another Alabama player who made this list at this position: Christian Barmore. Now, don’t get me wrong, Mathis ain’t Barmore. Barmore was a perfect fit for Belichick’s above description. Mathis is close. The “can run” part is where he pales in comparison to Barmore. But big (6-foot-4, 310 pounds, 35-inch arms) and strong (was a monster two-gapper in Saban’s system)? He checks those boxes. He won’t get knocked off the line. And he moves well enough to have finished second on the Crimson Tide in sacks last season (9.0).

Belichick wish list at outside linebacker
“OLBs: Big, rangy guy who can run if you can get them,” Jeremiah continued. “They’re usually the first-round picks. Settle for guys who can stay on the line. Long arms, quick hands. The 6-2 OLBs are hard to like even if they can run upfield. They’re small with no range. OLBs need size, speed and athletic ability.”

His 34-inch arms and 10-inch hands are built to control the point of attack on the outside, but he also has enough athleticism to be unleashed on third downs. He posted a 4.58-second 40 time (93rd percentile) and a 10-foot-5 broad jump (92nd) at this year’s combine. “He’s tough as [expletive],” one AFC defensive assistant told NBC Sports Boston. “Really physical on tape. Finishes. Powerful. I don’t think he’s the most fluid, but he has really good power as a rusher. It’s not his skill set to dip and run around. He’s about length. Nastiness. My guess is that’s what [the Patriots would] like as an edge rusher.” Size. Speed. Athletic ability. Even if he’s not the most bendy edge rusher out there — Drake Jackson from USC might fit that bill — he checks every box here.

Belichick wish list at inside linebacker
“Inside LBs: Has to be able to play in close quarters, instinctive, explosive tacklers who can face up and knock guys back,” Jeremiah said. “Can play zone defense and not be put in man-to-man situations. Good blitzers. Must be football smart. Don’t need great intelligence. Need instincts. Quickness and aggressiveness, leverage and explosive power.”

“Unbelievably tough,” said one NFC linebackers coach of the 6-foot-4 Walker. “Plays hard. Violent. Big. Fast. To me, he’s got a really high ceiling.” Walker has the explosive tackling ability Belichick listed above. “He’s a freak,” said one AFC defensive assistant. “Flies. He weighs 240 pounds, almost 33-inch arms.” Taking Walker here is a bit of a bet on his potential, but he can blitz, he can cover, he’s quick, disciplined and instinctive. He may not be the signal-caller his teammate Nakobe Dean was, but the NFC assistant told NBC Sports Boston he was capable of being a “Mike,” wearing the green dot and relaying the signals as a pro.

Belichick wish list at safety
“Safeties: Tacklers. Especially at the safety spot,” Jeremiah continued. “Want to be at least 200 pounds. Speed 4.5-4.6 range. Need range at the two deep safeties. Do not need mental giants. Need size/speed guy. Have to be able to cover man-to-man. The 200-pound 4.75 tough guy cannot play for us. Guy has to be able to play the pass. The traditional strong safety guy vs. the run is not what we need. Former corners moved inside to safety might be ideal if they have size. Ball skills and judgment are essential, more so than pure speed and athleticism.”

No surprise we have a couple of names here from what was a historic Georgia defensive unit in 2021. Cine is the ultimate Patriots fit at safety, based on Belichick’s description above. He’s a relentless tackler, who is more than willing to throw around his 202-pound frame with bad intentions. According to Pro Football Focus, he missed just 6.9 percent of his career tackle attempts. The Browns weren’t looking for blazing speed at safety back in the day — that 4.5 or 4.6-second mark is a pretty low bar in today’s game — but we’ll go ahead and assume Cine’s 4.37-second 40 time wouldn’t be shunned by Belichick.

Belichick wish list at cornerback
“CBs: Tackle and force guys,” Jeremiah added. “You need one pure cover corner, 5-10 range and up. Cannot put guys on the field who cannot tackle. Size becomes a factor. Small cover corner guys a liability. Intelligence on defense is not a great factor. DBs have to work well together like an offensive line. Need a sense of teamwork and unselfishness. Five potential problems: 1. Tackling. 2. Selfishness. 3. You need size. Big, physical, strong guys. 4. Need competitiveness. Guys that play hard for 60 minutes. What does a guy do on the PAT? 5. Need symmetry in defense.”

For this list? With tackling listed at the top of desired traits? Have to go with McDuffie here, who might be the most sound tackler at the position in this year’s draft class. He’s thought to be mature beyond his years and one of the smartest players in this year’s class — across positions. “Intelligence… is not a great factor.” But it’s gravy for McDuffie. The one potential here with this description-to-player match is that McDuffie isn’t a huge player. Kaiir Elam from Florida fits more of the “Big, physical, strong guys” description above. But McDuffie, at 5-foot-11, does break the “5-10 range and up” threshold. But his competitiveness and tackling make him the top option here.