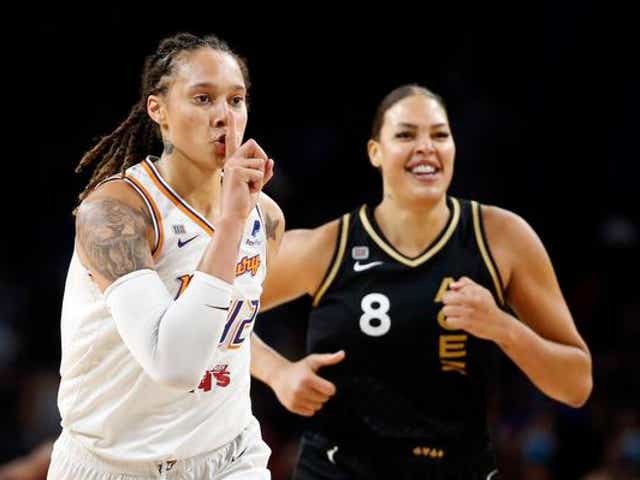 Before Diana Taurasi raced home for the birth of her second child Friday night, she delivered a fifth WNBA Finals berth for the Phoenix Mercury.

Taurasi scored 14 of her 24 points in the fourth quarter of an 87-84 win over the Las Vegas Aces in the deciding Game 5 of their semifinal series.

The fifth-seeded Mercury will host the sixth-Chicago Sky on Sunday in Game 1 of a best-of-5 Finals that is a rematch of 2014, won 3-0 by Phoenix.

“Diana gave us hope,” said Mercury coach Sandy Brondello, something her team needed after trailing by eight points (66-58) going into the fourth. “We played with pretty good poise. That comes from developing chemistry. The biggest thing for us was hope, then we were able to make defensive stops at the end.”

After that, over the final 6:30, neither team led by more than four points.

The Aces scored four straight points to lead 81-77 at 2:27. The Mercury answered with seven straight points on two Brittney Griner baskets and a Taurasi 3-pointer at 1:12. Chelsea Gray’s 3-pointer tied the game at 1:06. Off a Griner miss, Gray’s pass into A’ja Wilson was tipped by Skylar Diggins-Smith to Brianna Turner for a Mercury steal with 27 seconds left.

Taurasi killed some clock, then circled around the perimeter looking for a shot but lost control of the ball, which fell to Mercury guard Shey Peddy. She smartly got off a 3-pointer before a shot clock violation and was fouled by Riquna Williams with 4.8 seconds left. Peddy made two free throws, and the Mercury avoided overtime when 6-9 Griner blocked a drive by 6-4 Wilson in the final second.

“They have two outstanding, mentally strong players in Taurasi and Griner,” Aces coach Bill Laimbeer said. “They willed that onto their team. We need to acquire that trait.”

The second-seeded Aces fell just short of a return trip to the Finals after losing to Seattle in 2020.

The Mercury lost to Seattle in Game 5 of the 2018 semifinals but this time got over the hump to have a chance for their fourth WNBA title, all during Taurasi’s 17-year career. They also played in the 1998 Finals before Taurasi’s arrival.

Taurasi, 39, is now 16-2 in WNBA playoff series-deciding or single-elimination games. She ended a post-game TV interview by telling her wife Penny Taylor, “Hold it in babe, I’m coming.” She and Taylor are awaiting the birth of their daughter.

“She did GOAT things,” Peddy said. “She was quiet, missing some easy shots, then our offense is scoring 3s. That’s what she does. This is her time. She’s not new to this.”

Neither is Griner (28 points), who was on the 2014 championship team. But this will be the first Finals for all other Mercury players, including Diggins-Smith and Peddy, who combined for 29 points Friday.

Peddy started in place of injured Kia Nurse, who suffered a torn ACL in her right knee at the start of Game 4 on Wednesday. She made a buzzer-beating 3-pointer to beat Washington in a 2020 first-round elimination game and now the game-winning points against the Aces.

“I’ve got so much respect for Shey,” a tearful Diggins-Smith said. “Her story is just so inspiring. Even when my confidence is down, she pushes me. She’s just a great teammate.”

Peddy, who also shed some post-game tears, wore Nurse’s signature model shoes in honor of the player she was replacing for the Mercury’s biggest game in three years.

“The biggest part of her game is the hustle points,” Brondello said. “That’s why we won the game, because Shey just out-hustled them, gave us extra possessions back and we made plays.”

Turner and Griner combined for 20 rebounds, keeping the Mercury somewhat close on the boards (Aces 38-29 edge). Diggins-Smith had half of Phoenix’s 16 assists.

Kelsey Plum and Gray scored 22 each for the Aces. Wilson (21 points and 10 rebounds) and Liz Cambage (10 points and 11 rebounds) had double-doubles. But it wasn’t quite enough to send a record crowd of 9,680 home happy other than those who made the trip from Phoenix.

“We’re facing a lot of adversity,” with absences of Nurse and Sophie Cunningham (calf), Brondello said. “It shows just how tough-minded this team is. The job’s not done yet. Obviously in the fourth quarter, we have Diana Taurasi and they don’t,” stealing a famous line from Taurasi’ college coach Geno Auriemma. “That’s what it comes down to. She was dead tired. We scrambled enough and were able to come up with shots, and Diana made shots. It’s very exciting and a huge relief.”