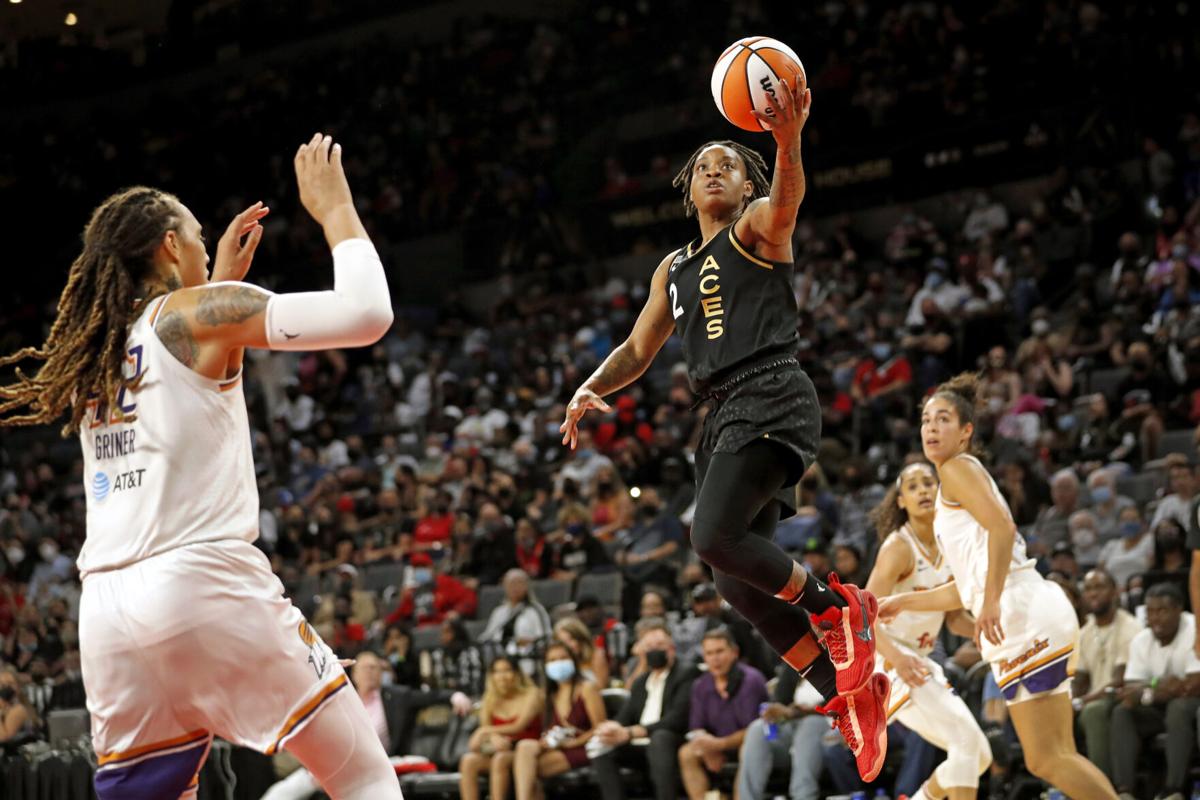 The Aces began their quest for the franchise’s first WNBA championship Tuesday with a 96-90 victory over the Phoenix Mercury in Game 1 of the WNBA semifinals at Michelob Ultra Arena.

Riquna Williams scored 14 of her team-high 26 points in the first quarter and Kelsey Plum added 20 of her 25 points in the second half. Chelsea Gray had 17 points and 12 assists before an announced crowd of 7,009 that included a brigade of Raiders — including Darren Waller, Henry Ruggs, Bryan Edwards Maxx Crosby, Johnathan Abram, K.J. Wright and Casey Hayward.

“Packed house. A lot of people came out tonight. I think as we continue to play throughout the series, I’m hoping we’re able to get even more,” Plum said. “It was just really cool that they came out. They had great energy. We feed off of that.”

The Aces hadn’t played since Sept. 19, having earned the No. 2 seed — and a double bye into the semifinals — by finishing the regular season with a 24-8 record. They won two of their three meetings with the Mercury, though starters on both teams played limited minutes in the regular-season finale.

The Mercury, the No. 5 seed, had to win single-elimination games against the New York Liberty and Seattle Storm to clinch their berth in the semifinals.

Advantage, Aces. At least in Game 1.

The Mercury actually opened a 36-27 lead by spreading the floor around center Brittney Griner, who buried jumper after jumper at the top of the key. But the Aces turned the tide by sending an extra defender in her direction, thereby discombobulating Phoenix’s offense and unleashing their own transition offense.

The Aces uncorked a 15-2 run to seize a 52-49 lead. Plum went to work in the third quarter. And A’ja Wilson helped close in the fourth with three consecutive baskets en route to 15 points and nine rebounds as Phoenix began to feel the fatigue of its third playoff game in six days.

“When we’re able to get stops and play in transition like that, we’re very difficult to guard,” point guard Chelsea Gray said. “We were able to set our halfcourt defense, and it allowed us to play with our schemes and not play 3-point line to 3-point line.”

Aces coach Bill Laimbeer praised the play of his guards, who combined for a mere four turnovers in 116 minutes of collective playing time. He said he isn’t sure yet how he’s going to deploy center Liz Cambage, who scored seven points in nine minutes amid foul trouble as she continues to recover from COVID-19.

But that can wait for Game 2 on Thursday.

“I’ve said from Day 1 when I was player, many, many years ago — guards win in playoff games because they can create,” Laimbeer said. “If you take away our guards, we go inside. You take away inside, we go to the guards. At the end of the day, we’re hard to guard.”

Griner led the Mercury with 24 points. Teammate Diana Taurasi scored 20 on 6-for-17 shooting.

Taurasi appeared to tweak her left ankle late in the fourth quarter and wore a protective boot to the postgame press conference.

She insisted she would be fine.