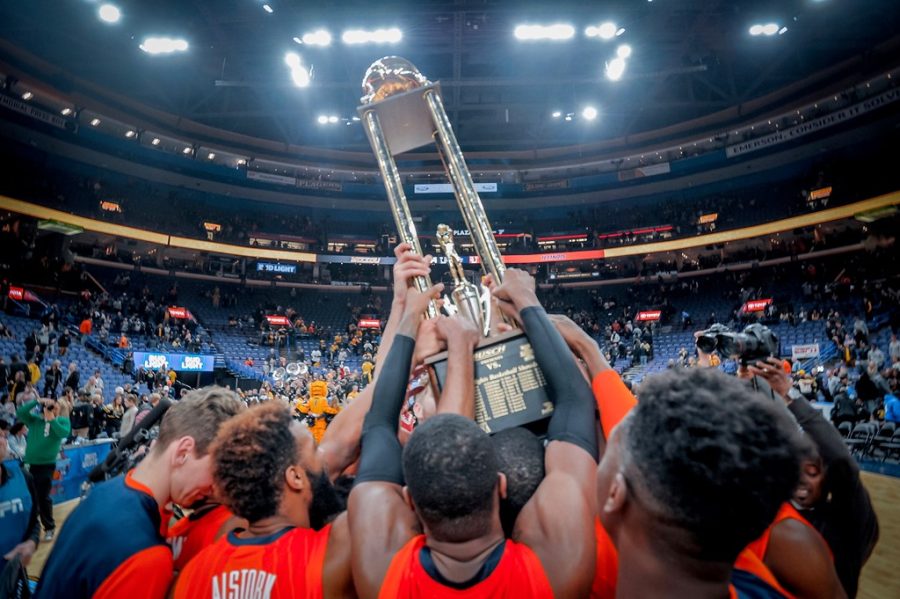 The Fighting Illini headed into the annual Braggin’ Rights game hungry for a rivalry win after dropping the series’ last three games. On Wednesday evening, Illinois took back the trophy after a commanding 88-63 win over Missouri, led by dominant performances from Kofi Cockburn and Alfonso Plummer.

Both Cockburn and Plummer secured their first career Braggin’ Rights victory with 25 and 22 points, respectively. Plummer’s 8-12 shooting led him to his seventh game of the season with 20 points or more. Cockburn added 14 rebounds for his seventh double-double of the season.

Frazier and Grandison each added three three-pointers as Illinois shot 48% from deep as a whole. The Illini defense challenged the Tigers, holding them to 36.5% shooting from the field while controlling the paint.

The Illini led for all but 16 seconds in the first half as their three-point shooting continued to push them ahead. Jacob Grandison scored first with a three, followed by one from Plummer and another from Grandison.

Mizzou added a couple early three-pointers of their own before Frazier drained a deep shot to put Illinois up 12-8. Da’Monte Williams continued to be a force on defense as he stole the ball, leading to two free throw makes from Alfonso Plummer after a transition foul.

DaJuan Gordon ended a four-minute scoring drought for the Tigers, but back-to-back shots in the paint from Kofi Cockburn put Illinois back up 10 points. The Illini offense continued to dominate as Williams drained a three, Cockburn made a hook shot and Coleman Hawkins tipped in a miss from Plummer.

Then, Cockburn slammed his second dunk of the night to give the Illini their biggest lead of the night, 29-12. It didn’t last long, though, as Mizzou went on a 11-0 run as Illinois failed to score for four minutes, turning the ball over three times. The Tigers’ leading scorer, Kobe Brown, went to work and scored nine points during the run.

A Cockburn layup put a stop to the run and the Illinois offense got back on track. The Illini went on a 9-0 run, started by Plummer who split a pair of free throws — his first miss from the line this season — stole the ball on the next possession, then made a layup. Consecutive deep threes from Frazier gave Illinois a 40-26 lead at halftime.

The Illini started off the second half in dominant fashion, scoring seven unanswered points within the first minute and a half. Frazier picked up right where he left off and sunk two deep jumpers then Plummer made another three.

Cockburn got back to work, securing a double-double early in the half then making back-to-back dunks. A made free throw from Cockburn gave the Illini their biggest lead of the night at 52-26. After three scoreless minutes to star the half, Mizzou scored six quick points while Plummer was good from three again.

Brandon Podziemski got in on the action hitting a trey before Plummer took a charge that led to a three from Hawkins. Jarron Coleman made a jumper, but Podziemski countered it with a putback on the following possession.

While the Tigers hit a couple jumpers, Cockburn couldn’t be stopped offensively. After slamming a one-handed dunk, Cockburn assisted a Grandison three as Illinois took a 69-37 lead. Cockburn added two pairs of free throws before heading to the bench with 20 points.

Frazier and Plummer continued to show off their versatility, each driving to the hoop for layups. RJ Melendez was the next freshman to impress, making a contested layup while getting fouled.

Cockburn and Plummer each kept finding ways to score, as the Illini led the Tigers 86-53 with less than four minutes to play. Underwood emptied the bench before Illinois claimed its second Braggin’ Rights win of his tenure.

Illinois has a week off for the holidays and will host Florida A&M in Champaign next Wednesday before getting back into Big Ten play at Minnesota on Jan. 2.