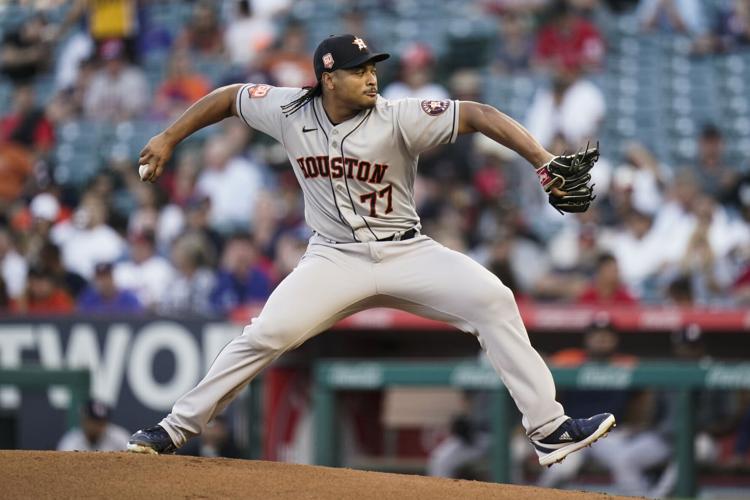 Even the mighty Houston Astros are not immune to occasional bouts of comprehensive ineptitude, as they demonstrated while blowing a four-run lead in the seventh inning Tuesday night with two errors, a hit batter with the bases loaded and a passed ball.

The Astros still had plenty of time to recover against an opponent that’s been largely inept for two full months now.

Kyle Tucker delivered a tiebreaking RBI double in the ninth inning, and the Astros rallied for a 6-5 victory over the spiraling Los Angeles Angels.

Although the Astros wasted a strong six-inning start by Luis Garcia with a mistake-filled seventh, the AL West leaders have still won four of five and 21 of 27 to move a season-high 28 games above .500 at 57-29.

“They say there’s no such thing as an ugly win, but that wasn’t very pretty,” Houston manager Dusty Baker said. “That was tough.”

José Altuve led off the ninth with a walk from Angels closer Raisel Iglesias (2-6), who had his second straight calamitous outing. Aledmys Díaz singled before the double to right by Tucker, a first-time All-Star selection last week.

Díaz hit an early two-run homer and Alex Bregman and Altuve had RBI singles. Hector Neris (2-3) pitched the eighth, and Ryan Pressly picked up his 19th save.

“I’m just grateful we were able to bounce back and get that run we needed against a very good closer,” said reliever Phil Maton, who got charged with four unearned runs in the seventh after committing one of the two errors. “We shouldn’t even have been in that situation.”

Pinch-hitter David MacKinnon had a two-RBI single during that four-run rally in the seventh, but the Angels had only two hits in their latest punchless performance at the plate.

“I don’t know if I’ve ever seen a game where they get two hits and five runs without a homer,” said Baker, who made his major league debut in 1968. “But we came back. We were lucky to win the game.”

Mike Trout left with upper back spasms before the fifth inning on another disappointing night for the Halos, who have lost five straight and nine of 10 to drop a season-low 12 games below .500 at 38-50. Shohei Ohtani went 0 for 2 with two walks on the night before the All-Star returns to the mound and attempts to extend his streak of 28 2/3 scoreless innings.

Trout struck out in his first two at-bats against Garcia before leaving the game. He also struck out 16 times while batting .177 on the Angels’ road trip.

“It spasmed up on him,” Angels manager Phil Nevin said of Trout. “I didn’t like the way he was moving around in center field after that second at-bat. … These things can be tricky. It’s upper-back, so that’s the comforting thing. But everything checked out OK.”

Garcia struck out seven and retired his final 13 hitters over six innings of one-hit ball for the Astros. He left with a 5-1 lead, but failed to win his fifth consecutive start after Houston’s bullpen and defense collapsed.

Houston was up 2-0 after two batters: Altuve drew a leadoff walk before Díaz drilled his sixth homer to center.

Los Angeles didn’t have a baserunner between Brandon Marsh’s second-inning single and Luis Rengifo’s 10-pitch walk in the seventh. After Houston’s back-to-back errors and MacKinnon’s big hit, Marsh scored the tying run on a passed ball.

Before he wrapped up the ninth, Iglesias had allowed eight consecutive batters to reach base, starting with four straight hits to end his horrific blown save last Friday in Baltimore. Iglesias’ velocity has declined in his last two appearances, and Nevin acknowledges it’s a concern.

Astros: RHP Lance McCullers threw a two-inning simulated game. He’ll throw another on Saturday. He hasn’t pitched in the majors since injuring his right flexor tendon in last season’s playoffs.

Angels: RHP Austin Warren returned from the injured list before the game and pitched a scoreless seventh. The reliever had been out since June 17 with a right triceps strain after missing time earlier in the season when he was hit in the face by a baseball during batting practice.