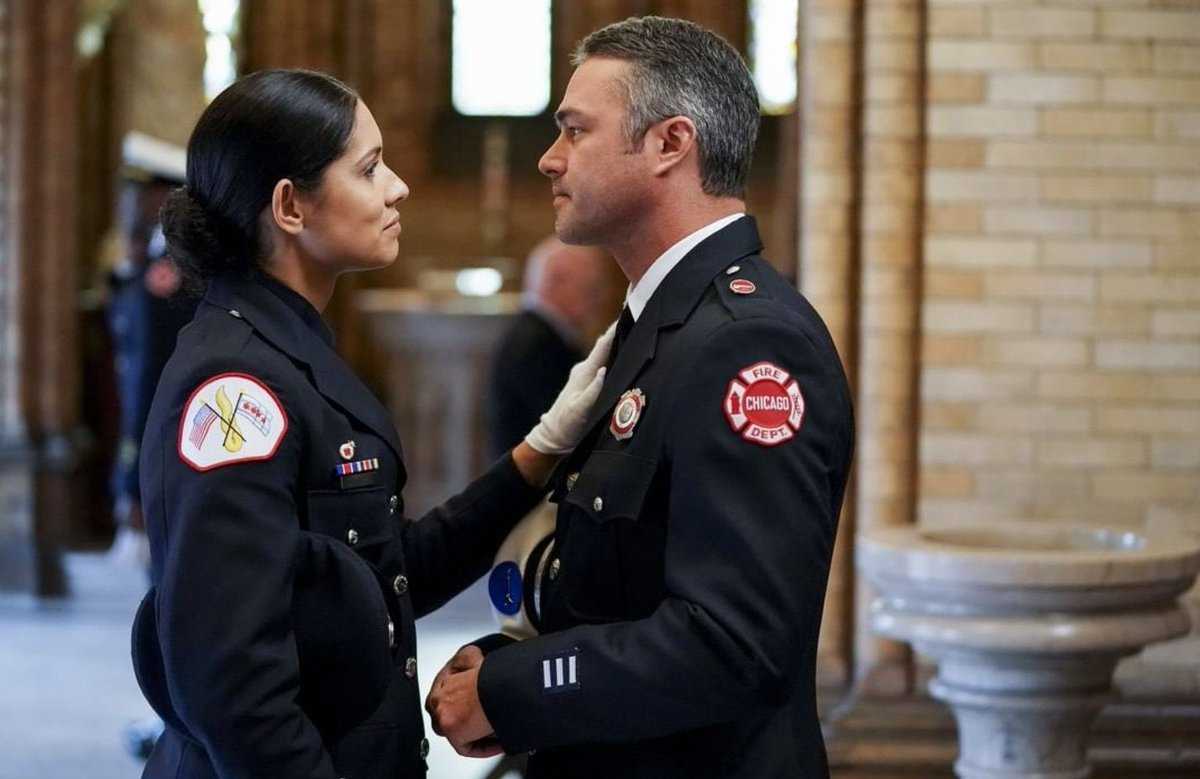 You got this, Stella Kidd! Chicago Fire has been filled with red-hot romances throughout its run, but nothing compares to Kelly Severide’s relationship with Stella Kidd.

When fans first met Kelly (played by Taylor Kinney), he was a rough and tough firefighter who was known for being a ladies’ man. At the time, he was brooding and wild while his eventual best friend Matthew Casey (Jesse Spencer) was the softie who viewers were rooting to find love.

Over the years, One Chicago diehards became accustomed to Kelly’s whirlwind romances — including the time he got married in Las Vegas after losing his roomie and BFF Leslie Shay (Lauren German) in season 3. However, the arrival of Stella (Miranda Rae Mayo) in season 4 shook things up.

The new character, who made her debut in 2016, left fans with a lot of questions and even more hope that Squad 3’s leader could find a forever kind of love.

Unfortunately, it took time before Kelly and Stella’s love lives finally lined up. They had to overcome jealous exes, overbearing parents and work complications before eventually crossing the “just friends” line.

Through all the ups and downs, Kelly always seemed sure that Stella was The One. During season 8, episode 4, the lieutenant put Stella at ease following a scary call involving an infectious disease.

“Hey, I’m not worried,” he told her in the November 2019 episode. “It’s not how I’m going to go.” When asked how was going to go, he simply told Stella, “[As] an old man in bed with our kids and grandkids and you surrounding me.”

Throughout their relationship, Kelly has almost lost Stella on multiple occasions, due in part to his stubbornness and the fact that he thinks he knows what’s best for her. That was the case in season 9 when she chose to ice Stella out so she could focus on her lieutenant’s exam.

“I’ve been MIA because I thought that was best for you. Chief Conway told me the white shirts said the only reason you’re moving up the ladder is because you’re with me. I didn’t tell you because I figured it would mess with your head. You deserve better,” he told his girlfriend at the time.

Stella fired back questioning whether he thought she could actually handle being a boss. “Of course, I know I don’t need your help with some test. I needed you to do what you do best: To tell me, ‘You got this, Stella Kidd,’” she responded. “And to pick me up when I’m feeling low, and instead, you shut down on me. You shut down on me like the bad old days.”

Her fiery reaction led Kelly to give one of his most memorable speeches on the series.

“This attitude of yours is exactly why I know you got this, Stella Kidd, and it’s why I know how badly I screwed up, and it’s why I’m never gonna let you go away from me again,” he said to which Stella replied, “You are not the decider. And pretty soon, we’re gonna be in the same rank, so listen up. I am the one who’s never going to let you get away again.”

One season later, the duo again hit a rough patch, but showrunner Derek Haas teased in February 2022 that a wedding was still in the plans for the lovebirds. “We are on scope for a wedding episode this season. I would write it down — maybe not in ink, but as close to ink as you get,” he told Variety, referring to the newly-engaged Kelly and Stella.