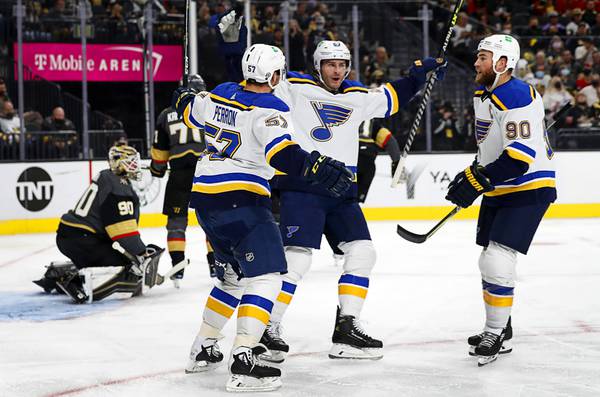 Even after scoring first Wednesday night, it felt like the Golden Knights were walking a tightrope for much of the game. They had plenty of offensive chances, but gave up even more to the St. Louis Blues, and eventually it cost them.

Vladimir Tarasenko converted on what turned into a 3-on-0 for St. Louis in the third period, putting the Blues on top for good in an eventual 3-1 Vegas defeat. It was the third time in three games this season the Golden Knights allowed at least 30 shots on goal, and the third time they had fewer shot attempts than the opponent.

Vegas even scored first, striking on the rush with two of its stalwarts. Down Mark Stone and Max Pacioretty to injuries, the Golden Knights needed other lines to step up offensively and the original Misfit Line did just that, when William Karlsson converted a 2-on-1 chance with Reilly Smith at the 8:17 mark of the first.

But even with the lead there were signs of trouble. The Blues had the first seven shots of the game, and controlled play for large stretches of the game, a troubling early-season trend for Vegas. The Golden Knights held onto their lead into the first break, but Brandon Saad put home the Blues’ first goal on their 20th shot of the contest 3:221 into the second period.

After allowing 16 shots in the first and 14 in the second, the Golden Knights actually had their best period in the third, giving up just eight shots. But one of them was a no-doubter. Alex Pietrangelo turned the puck over in the neutral zone, Torey Krug moved the puck through transition so quickly all three St. Louis defenders got behind the defense. Brayden Schenn to Jordan Kyrou to Tarasenko and that was all she wrote.

Ivan Barbashev added an empty-net goal with 1:12 to play to bring the game to 3-1.

It’s a tough-luck loss for Robin Lehner, who had his best game of the young season. He kept the Golden Knights in it from the opening whistle, and finished with 35 saves on the evening.

Golden Knights give up goal, head to third period tied with Blues

Take a look at the shot counter through two periods of Wednesday’s game, and you’d be surprised the score is just 1-1. The Golden Knights and Blues played a fast-paced 40 minutes at T-Mobile Arena, but only lit the lamp once each as the game hit the second intermission.

It took 20 shots, but the Blues finally got on the board at 3:21 of the second period. Vegas had been playing with fire much of the first period, and carried into the second. St. Louis torpedoed the Golden Knights’ net, and Brandon Saad was there to pick up the rebound of a blocked shot and deposit it into the net to even the score 1-1.

The low score was not a result of defensive hockey, but more the play of two goaltenders on their game. Robin Lehner was superb for Vegas, keeping his team in it early on, while Jordan Binnington made all the saves he needed to for the Blues. At the midpoint of the game, shots were 24-24 aside.

The Golden Knights’ drew a power play just after halftime, but it lasted 41 seconds before an Alec Martinez trip sent the game to 4-on-4. The Blues didn’t do anything with their 41 second of power-play time on the other side of that, either.

Through two periods, the Golden Knights led in shots on goal 31-30.

High-speed first period has Golden Knights on top of Blues

The last time the Golden Knights were at home, they were eaten alive in the first few shifts before grabbing the first goal of the game. It happened again on Wednesday, as Vegas withstood early pressure from the St. Louis Blues and countered with a tally to snag a 1-0 lead after a period at T-Mobile Arena.

The Blues were all over the Golden Knights early. They fired the first seven shots of the game (which included a power play), and were credited with nine scoring chances in the opening six minutes by stats site Natural Stat Trick. Robin Lehner stood tall, as the Golden Knights needed him to.

But even when the Golden Knights struggle with possession, they’re deadly on the rush, especially when the original Misfit Line is on the ice. Reilly Smith won a puck battle in the neutral zone and sped the other way with William Karlsson on his flank. Smith fed Karlsson, whose initial shot was stopped but he followed his own rebound and put Vegas on top 1-0 at the 8:17 mark of the period. Later in the period, Jonathan Marchessault hit the post on another od-man rush.

Immediately after the goal, Lehner was challenged again, turning away a Klim Kostin breakaway chance. He made 11 saves in the first 11:02 of the game, and finished with 15.

The rest of the period featured plenty of end-to-end action. There were 52 combined shot attempts in the frame (23 by Vegas), and the Golden Knights led in shots on goal 17-15.

The five days off between their last game and tonight has been a bit of a mixed bag for the Golden Knights. They’ve had to stew on their last outing, a 6-2 drubbing by the Kings, while also knowing they’ll be without two-thirds of their top line for the foreseeable future.

But those days have also allowed the return of three players from injuries, all of whom are expected to make their season debuts when the Golden Knights take on the St. Louis Blues at 7 p.m. at T-Mobile Arena, televised nationally on TNT. Vegas will struggle for as long as top forwards Mark Stone and Max Pacioretty are out, but the silver lining is an otherwise healthy lineup featuring forwards Nicolas Roy, William Carrier and Brett Howden.

“When we’re in this situation now and we do get an opportunity, we’re going to have to capitalize on it,” defenseman Alex Pietrangelo said. “I don’t think anyone’s panicking in our room. They’re important to our team but we’ve got depth here. There’s a reason that we have depth, and these are the situations where you need everything.”

Pacioretty could miss up to six weeks, while Stone’s situation is less clear. He won’t need surgery but isn’t expected to suit up in Vegas for a few games.

There’s no minimizing those losses. Those are the Golden Knights’ two best forwards and scoring threats, and Vegas will need to find ways to win without them. And while Roy, Carrier and Howden don’t exactly measure up to the level of production Stone and Pacioretty provide, the situation allows Vegas to show off the part of its game it was so excited about this summer: forward depth.

“We need them,” coach Pete DeBoer said earlier this week. “You start really testing the depth of the organization if we don’t start getting some of these guys back.”

We’ll learn a lot about the Golden Knights for however long those two are missing, but one thing that isn’t a surprise is the Blues. Both part of last year’s reconfigured West Division, the Golden Knights and Blues met eight times last year, with Vegas going 6-1-1. St. Louis has a few new names on the roster, but the core of the 2019 Stanley Cup champions — forwards Ryan O’Reilly and David Perron, defenseman Colton Parayko and goalie Jordan Binnington — are all still there.

In a way, it’s refreshing to see St. Louis again. The Golden Knights will play the Oilers and Islanders this weekend, teams they haven’t seen since the 2019-20 season. But in the Blues, there is familiarity. And when a team hasn’t played in nearly a week and needs a chance to adjust to missing two key cogs, a lack of surprises could be just what Vegas needs.

“For us to be able to focus on our team, it’s nice to be able to play a team we’ve played so consistently over the last couple of years,” forward Reilly Smith said.

Above all, it’s nice to just get back on the ice. Vegas last played Thursday and has had four practices since then, but players are wired to want to compete in games. The Golden Knights have a chance tonight to erase any bad taste from the last time out and are looking forward to the opportunity to seize it.

“It’s a little bit strange in terms of trying to get into a rhythm, and those almost felt like preseason games because we’ve had such a big break,” Pietrangelo said. “I think it gave us a chance to rest up the guys that we have and get some good practices underneath us.”