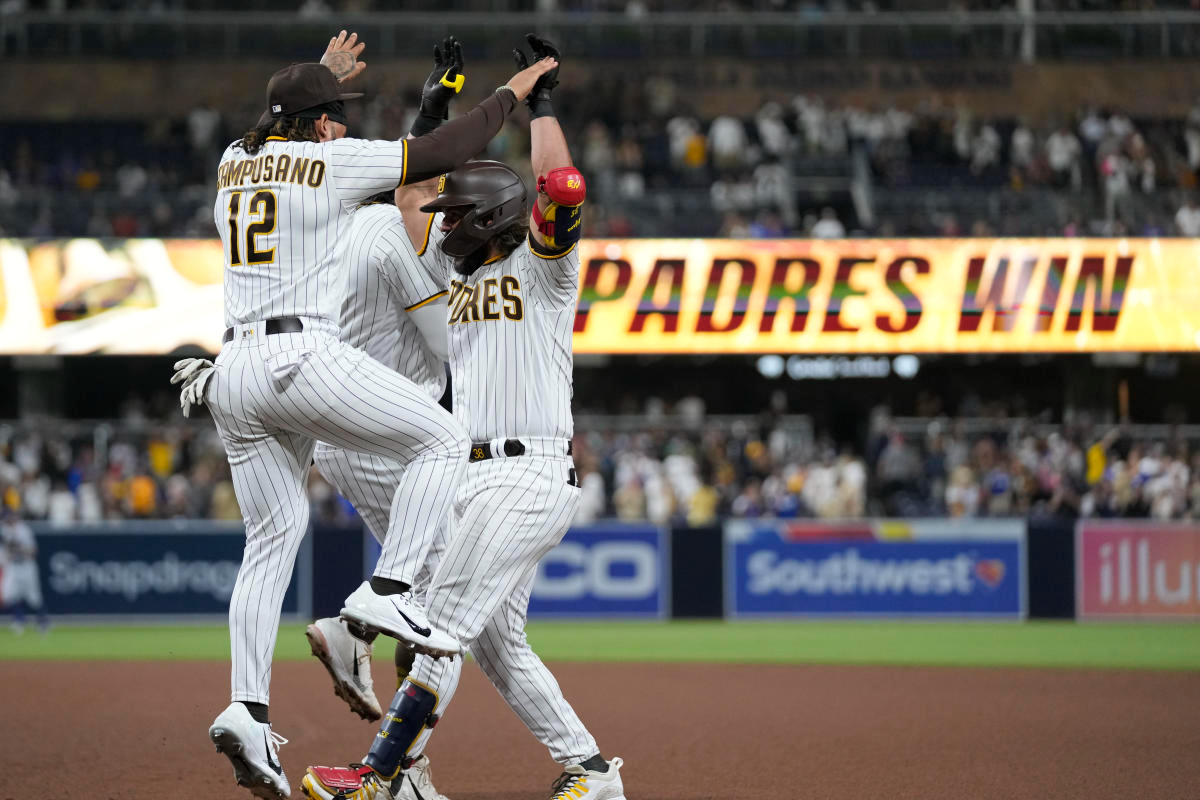 Jorge Alfaro is used to being in position to walk off games. Just not with a walk-off walk.
Alfaro drew a bases-loaded free pass from Craig Kimbrel with two outs in the 10th inning and the San Diego Padres beat the NL West champion Los Angeles Dodgers 4-3 on Tuesday night to reduce their magic number for clinching a wild-card berth to four.

The Padres started the winning rally against Kimbrel (6-7) when Kim Ha-seong sacrificed automatic runner José Azocar to third. Juan Soto was intentionally walked, Manny Machado struck out and Brandon Drury walked to load the bases. Alfaro worked the count full before walking to bring in Azocar.

Alfaro tossed his bat aside and gestured in surprise to the Padres’ dugout as he trotted to first base.

“I threw my bat. It happens. I don’t really try to do too much,” Alfaro said. “I don’t know how to describe the feeling. It was funny because I don’t walk that much. I couldn’t believe it. I walked to finish a game.”

It was Alfaro’s eighth career walk-off plate appearance and fifth this year. It was the 12th walk-off win for the Padres, who are 12-4 in extra innings.

Alfaro said the key in those plate appearances is “just try to relax, breathe. If you try to do too much, you’re going to overswing. That’s all I tried to do.”

Kimbrel “didn’t give me anything in the zone to put in play,” Alfaro said. “My plan was to get something close and try shoot it the other way, or up the middle. Pretty much that’s it. It helped me to get ready early and recognize the pitch.”

Padres manager Bob Melvin said the only surprise “is him literally walking to walk it off. It’s not really one of his things that he tends to do and we’ve seen him get a few hits to do it. But man, after getting down 0-1 like that, having to try to be patient, bases loaded, knowing he has to throw it over the plate, like I said, it’s not really his forte but he seems to come up big in those at-bats and really focuses. There’s a lot of desire in him.”

Melvin added “there’s a tremendous amount of success in that spot. Everybody feels good when he’s up there. I wouldn’t have called the walk walk-off but it shows that he’s been through it before and he has a lot of confidence in somehow getting a run in.”

Pierce Johnson (1-1) pitched a perfect 10th, including striking out Mookie Betts for the third out.

The Padres had gone ahead 3-2 in the eighth when third baseman Justin Turner’s two-out, bases-loaded error on Drury’s broken-bat grounder allowed Trent Grisham to score.

San Diego played some sloppy defense in the ninth to let the Dodgers tie it at 3. Trea Turner hit a leadoff single against Josh Hader and went to third when Ha-seong’s error at shortstop allowed Will Smith to reach. Turner scored on Alfaro’s passed ball.

The Padres are closing in on their first playoff berth in a full season since 2006, when they won the NL West for the second straight season. They were aided by the Milwaukee Brewers’ 6-2 loss to St. Louis. The Padres hold a 2 1/2-game lead over Philadelphia for the second wild card. The Brewers stayed 1 1/2 games behind the Phillies.

San Diego won a first-round series against the Cardinals after the pandemic-shortened 2020 season and then were swept in the Division Series by the eventual World Series champion Dodgers.

Los Angeles remained at 106 wins, one shy of breaking the franchise record.

Padres left-hander Blake Snell pitched five strong innings and left with a 2-0 lead that the bullpen promptly gave up. Nick Martinez loaded the bases with one out in the sixth on a single and two walks before Max Muncy’s fielder’s choice brought in Trea Turner. It was originally ruled an inning-ending double play but was quickly overturned after a review. Robert Suarez came on and allowed Chris Taylor’s tying single.

San Diego gave Snell an early lead against lefty Tyler Anderson. Machado reached on a fielder’s choice, Drury doubled to left and Wil Myers bounced a single through the infield to bring them both in.

Anderson then retired his final 16 batters. He allowed two runs and three hits in six innings, struck out three and walked none.

Snell held the Dodgers to one hit while striking out six and walking three.

Betts opened the game with a single and then stole second base, but plate umpire Sean Barber immediately stood up and gestured to call umpire’s interference on himself and wave Betts back to first. Replays showed catcher Austin Nola’s right elbow hit Barber’s facemask as he made the throw. Barber explained the call to Dodgers manager Dave Roberts, who didn’t look happy. Snell then retired the side.

The Padres presented a plaque to Hall of Fame broadcaster Jaime Jarrín, the Spanish-language voice of the Dodgers, in a pregame ceremony at home plate. Jarrin is retiring after this season, his 64th with the Dodgers. The Padres were represented by Spanish-language broadcaster Eduardo Ortega along with owner Peter Seidler and brother Tom, a team senior vice president, who are members of the third generation of the O’Malley family that once owned the Dodgers.