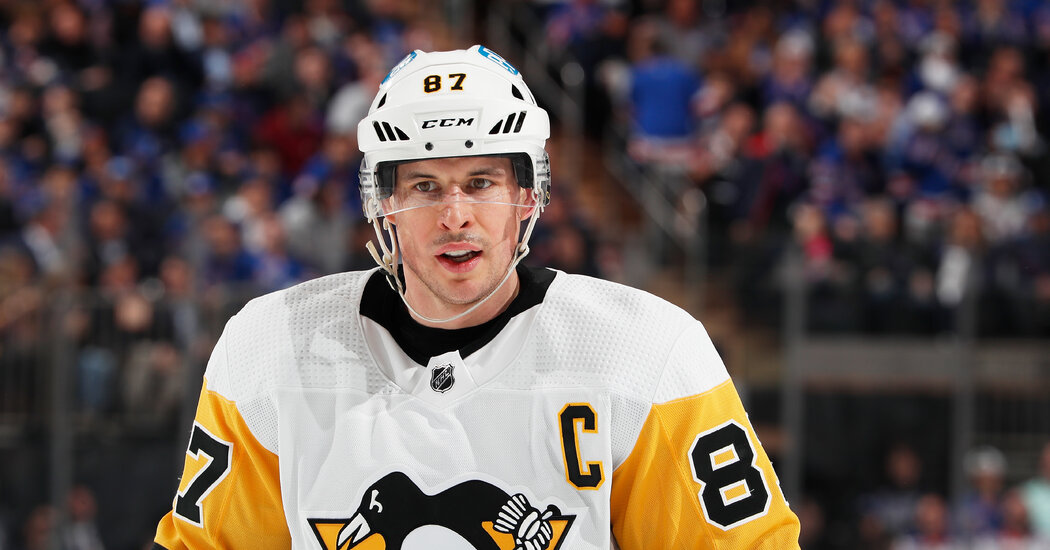 One of the league’s longest active players, Crosby quietly had an exceptional season. His Pittsburgh Penguins are in the playoffs for the 16th consecutive year.

TORONTO — The Pittsburgh Penguins are in the playoffs for the 16th consecutive season — the longest active streak of any team in the five major professional team sports in North America — largely because Sidney Crosby, their enduring star center, quietly had one of the best seasons in the N.H.L. at age 34.

Only seven current N.H.L. players have been at it longer than Crosby, and six others came into the league with him in 2005. With the exception of Alex Ovechkin, the Washington Capitals forward who is chasing Wayne Gretzky’s career goals record, no player of Crosby’s age or with 17 seasons under his skates has been as dominant.

Elite athletes like Tom Brady (44), Tiger Woods (46), Serena Williams (40) and Rafael Nadal (35) have worked to stay at the top of their sports, with varying degrees of success. Crosby, who has won three Stanley Cups and a boatload of individual awards in a physically brutal game that becomes faster and younger by the year, has been paying attention.

No one has watched Crosby more closely than Andy O’Brien. A strength and conditioning coach, O’Brien met Crosby at a summer hockey school when the player was 13. This summer will be their 22nd working together in Crosby’s off-season home near Halifax, Nova Scotia.

But Crosby does not rush toward summer. The Penguins opened their first-round playoff series against the Rangers on Tuesday night at Madison Square Garden, winning 4-3 in triple overtime on a goal from Evgeni Malkin. Crosby had two assists.

“It’s incredible that he is still one of the top players in the league at his age,” said O’Brien, who is based in Toronto and also works as a high-performance consultant with the Florida Panthers.

“I don’t look at it as he’s peaked and now we’re just trying to slow down that decline,” O’Brien said. “He’s capable of putting together a season that’s better than any season he’s ever had. He’s relentless at his growth as an athlete, willing to adapt and find new ways to be effective. And the best measuring stick that we have is what he’s doing on the ice.”

What Crosby did in 69 games this year was score 31 goals (nine of them game-winners) and make 53 assists, and he persisted in a sport that exacts a toll on the body. His 84 points tied him for the team lead with left wing Jake Guentzel, who is seven years younger than Crosby and played seven more games.

Crosby missed the start of the season because of wrist surgery and Covid-19, but has been terrific since. Five hundred of his peers picked him last week as the league’s most complete player. And he still makes it look easy.

“You have to take care of your body a little bit more,” Crosby said. “It’s more years of wear and tear, and on top of that, you’ve got to find ways to adjust your game. There’s tons of little things you can do. But taking care of your body is the biggest one.”

Crosby, chosen by the Penguins first overall in 2005 and heaped with expectations to lead the N.H.L. out of its lockout season, played his 1,000th career game in February 2021 and scored his 500th goal one year later. Stanley Cups in 2009, 2016 and 2017, and numerous Hart, Conn Smythe, Art Ross and Rocket Richard trophies, two Olympic gold medals, more than 100 points in six seasons and the most playoff points of any active player, make up his career. So far.

“He never has arrived at a point where he says, ‘OK, that’s good enough, I just need to stay there,’” O’Brien said. “He constantly pushes himself.”

Crosby still barges into the corners, battles alongside the boards and scores nifty goals — on breakaways and tic-tac-toes, from the back door and behind the net, on one knee and on his behind and off a goalie’s head. Almighty skating and sleight-of-hand playmaking can, in an instant, give way to manhandling opposing players. He is a strongman and an escape artist who can thunder ahead, turn this way and that, burst into an open spot and find the net, which he had done 586 times, including in the playoffs, entering Tuesday.

It is remarkable considering his injury history: a high ankle sprain from crashing into the boards in 2008; devastating concussions that caused him to miss the bulk of two seasons in 2011 and 2012; a broken jaw in 2013; another concussion in practice in 2016; core muscle surgery in 2019; a left wrist injury from 2014 that required two surgeries in the past two years.

‘His athleticism is as good as it’s ever been.’
Crosby, O’Brien said, has two particular gifts, the first being an ability to tolerate an unusually high workload.

“He can put in these crazy long workouts with high intensities and then go on the ice and do the exact same thing,” O’Brien said. “And then feel ready to go the next day. I’ve had other clients of mine that have tried to hang with him, and they just can’t recover in a way that’s normal for him.”

O’Brien said Crosby has a “highly parasympathetic nervous system” — which allows for a low heart rate and for his body to stay in a state of recovery longer. “He’s very good at rest, so when he’s not training, his nervous system is in a really calm state.”

Crosby, who has prioritized strength throughout his career, turns 35 in August. “His overall athleticism — speed, agility, balance — is as good as it’s ever been,” O’Brien said.

O’Brien said that Crosby had an unusual ability to operate at maximum physical exertion while skating, carrying the puck and absorbing and delivering hits, and that his low heart rate helped him cognitively.

“A lot of athletes that think the game at a high level and are really good at processing typically tend to be slower athletes,” O’Brien said. “He has the best of both worlds.”

‘You’re always looking for inspiration.’
Crosby is a huge fan of other sports, like football, golf and especially tennis — playing and watching — and he studies how aging superstars endure.

“You look at Nadal, he’s just a horse and so determined with his work ethic,” Crosby said. “He always looks like he’s working hard. Then a guy like Federer, nothing looks clumsy. He is so graceful and doesn’t look like he’s working quite as hard even though he is. Both have had success. You’re always looking for inspiration.”