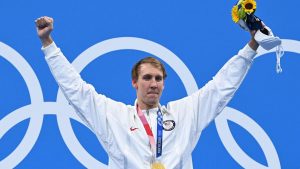 Chase Kalisz, a Michael Phelps protege who won the silver medal at the 2016 Rio Olympics in the men’s 400 individual medley, won gold Sunday to give the United States its first medal of these Olympic Games.

“It means the world,” Kalisz said on the NBC broadcast immediately after his race. “This is the last thing that I really wanted to accomplish in my swimming career. It was something that was a dream of mine since as long as I could remember.”

On the women’s side, Emma Weyant and Hali Flickinger took silver and bronze respectively in the 400 IM.

In the 4×100 free relay, the Americans won bronze behind Canada and Australia, which set a world record with its victory. Erika Brown, Abbey Weitzel, Natalie Hinds and Simone Manuel swam for the USA in the final.

The men’s 400 IM is very familiar to Americans because it is the first swimming race of every Olympics and because Phelps, the most decorated Olympian of all time, won it in 2004 and 2008, followed by Ryan Lochte in 2012.

Kalisz has said Phelps, his old training partner at the North Baltimore Aquatic Club, is like the “older brother to me that I never had.” Phelps was watching Sunday morning’s final from the NBC announcing booth high above the Olympic pool.

The longtime gold-medal favorite in this event, Japan’s Daiya Seto, shockingly failed to advance out of Saturday night’s qualifying, creating a wide-open final. Kalisz qualified with the third-fastest time.