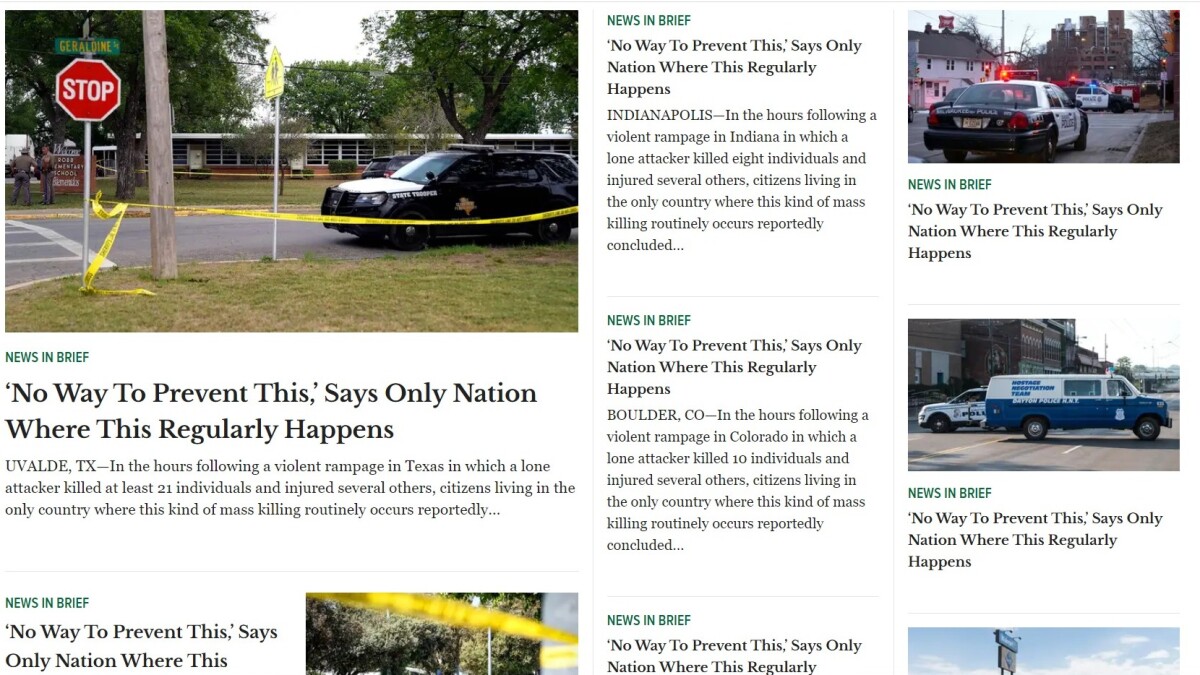 The Onion blanketed its homepage today with the same article it has posted in response to many other past mass shootings, skewering the idea that such atrocities cannot be stopped.

“‘No Way To Prevent This,’ Says the Only Nation Where This Regularly Happens,” reads the headline on the article, which was posted 21 times on the satirical site’s home page. Each story corresponds to a different mass shooting but with the same headline and quotes. The Onion had posted the same article earlier this month following the mass shooting at a grocery store in Buffalo, NY, and it has run the article numerous times since 2014. That was after there was a mass shooting in the Isla Vista community near UC Santa Barbara.

It always quotes a fictional resident of that state lamenting a tragedy they describe as inevitable:

“This was a terrible tragedy, but sometimes these things just happen and there’s nothing anyone can do to stop them,” the person says. “It’s a shame, but what can we do? There really wasn’t anything that was going to keep this individual from snapping and killing a lot of people if that’s what they really wanted.”

The article, which has no identifiable author, always notes that such feelings are shared “by tens of millions of individuals who reside in a nation where over half of the world’s deadliest mass shootings have occurred in the past 50 years and whose citizens are 20 times more likely to die of gun violence than those of other developed nations.”

“At press time, residents of the only economically advanced nation in the world where roughly two mass shootings have occurred every month for the past eight years were referring to themselves and their situation as ‘helpless,'” Tuesday’s version — like its predecessors — concludes.

The Onion leaned into its message on Wednesday, sharing a Twitter thread listing every version of the piece from over the years. Thousands of people had liked and retweeted it by midday, with many noting the devastating impact of seeing years’ worth of recurring tragedies lined up in a row — seemingly underscoring the point of the satire.

It also flooded the homepage of its website with the stories, the same headline appearing over and over but next to different photos: a spa in Atlanta, a Walmart in El Paso, and a grocery store in Buffalo.

Jason Roeder, a former writer, and editor at The Onion, is credited with creating the original article.

“When I wrote this headline, I had no idea it would be applied to the high school a mile from my house,” he tweeted after the Marjory Stoneman Douglas High School shooting in 2018.

Dave Cullen, a journalist who has covered mass shootings for years and wrote the New York Times bestseller Columbine, told NPR in 2015 that the article “resonates because they totally got it.”

In a 2017 interview with Vice, Marnie Shure, then the managing editor of The Onion’s website, counted this article as one of her team’s proudest accomplishments.

“By re-running the same commentary it strengthens the original commentary tenfold each time,” she said. “I’m proud to work alongside the people who saw the potential in that, and who were able to send out that message and make it resonate. In the wake of these really terrible things, we have this comment that really holds up.”