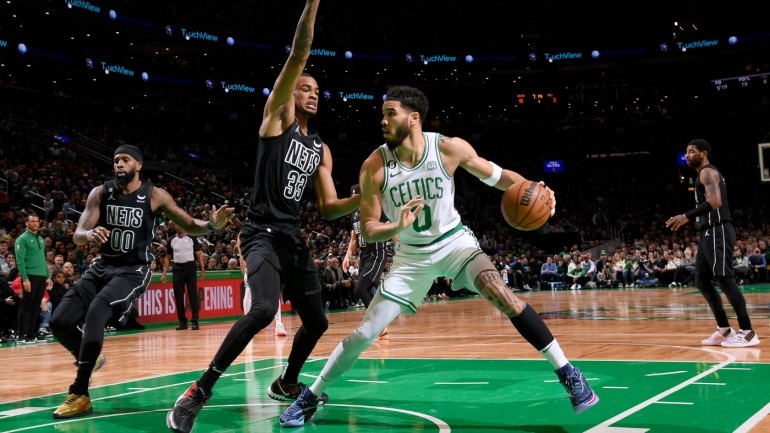 On Wednesday night, the Boston Celtics are hosting the Brooklyn Nets in Massachusetts.

For the game, the two teams have finalized their injury reports and starting lineups.

It was a relatively close first quarter, but ultimately, Jayson Tatum came out on top with an 18-16 lead over his Brooklyn Nets opponent   as in all five of them who were on the floor Wednesday night. It was a shame for Brooklyn, then, that Tatum has teammates.

Jaylen Brown added 26 points as both of Boston’s stars knocked down seven 3-pointers in a game the Celtics never trailed and led by as many as 49 points. Boston dominated on both ends of the floor, shooting 60% through three quarters on the way to its largest victory of the season.

Robert Williams finished with 16 points and nine rebounds in his return from a sprained ankle. Derrick White added 14 points and 10 rebounds.

Kyrie Irving scored 20 points and Cam Thomas added 19 for Brooklyn, which struggled throughout while shooting 41%, including 9 of 39 beyond the arc. The Nets dropped to 4-7 since Kevin Durant sprained his right knee on Jan. 8.

Brooklyn had managed to keep pace with Boston in the standings without Durant and through recent injuries to Ben Simmons (left knee soreness) and T.J. Warren (left shin contusion), who both sat for the third straight game.

The Celtics had their entire rotation available except for Marcus Smart, sidelined for the fifth straight game as he recovers from his sprained right ankle. Boston took advantage, racing to a 33-7 advantage as the Nets started the game just 2 of 14 from the field.

Irving missed four of his first five shots as Boston’s crowd booed whenever he touched the basketball, mirroring the treatment he received during his most recent visits to TD Garden.

Tatum finished the quarter with 18 points, single-handedly outscoring the Nets as Boston took a 46-16 edge into the second quarter. The 30-point,first-quarter lead marked the first time in franchise history Boston outscored its opponent by 30 in the opening period.

The victory is the latest in a growing trend between Boston and Brooklyn. The Nets haven’t beaten the Celtics since Nov. 24, 2021. If you include the playoffs, the Celtics have now beaten the Nets 10 times in a row. All three Boston victories this season have come by double digits. Kevin Durant may have been out for this one, but losing by 43 is ugly no matter who you put on the floor.