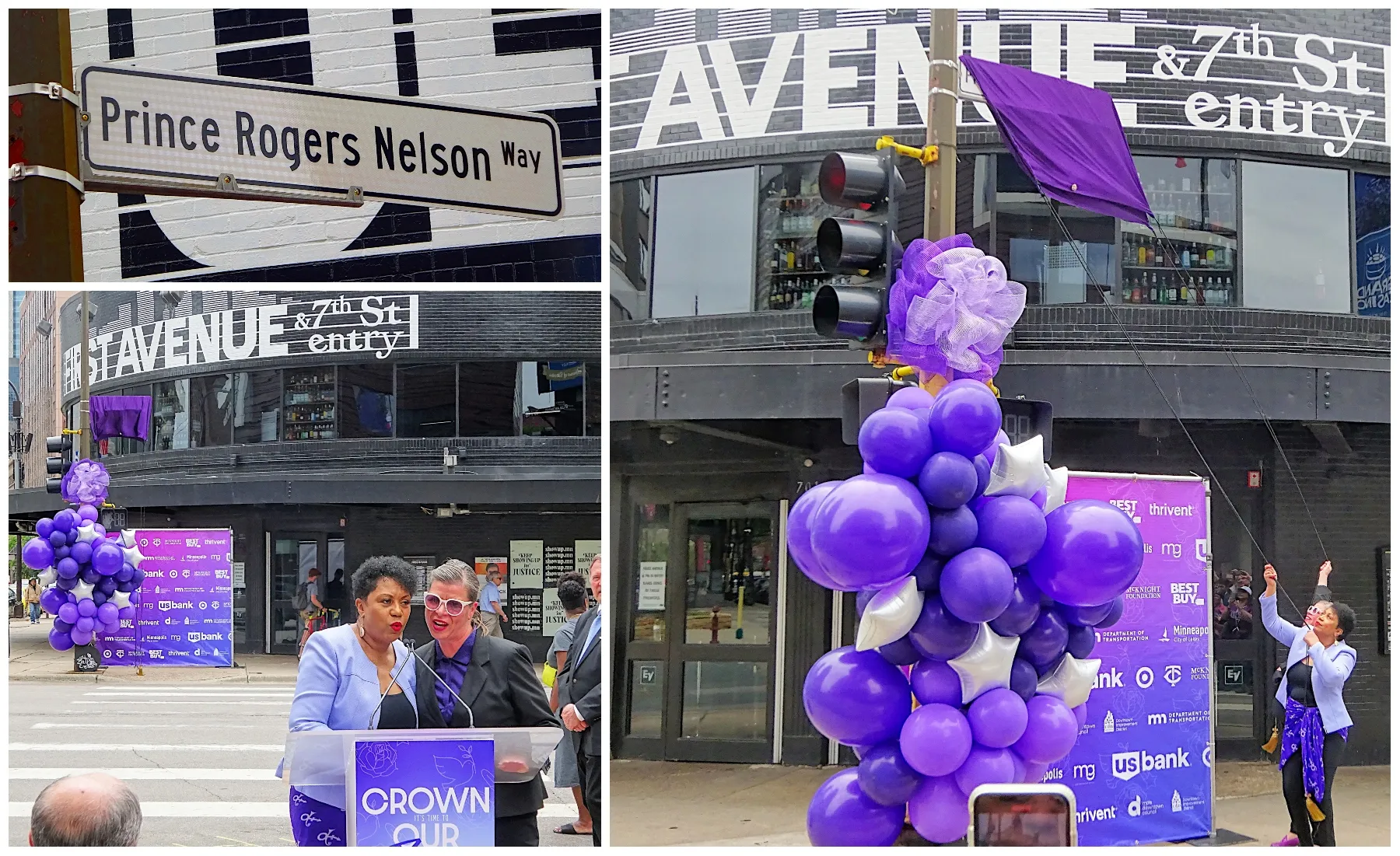 On Thursday, May 26, the Minneapolis City Council approved the renaming of First Avenue North (between 7th and 8th Streets) in honor of the city’s favorite son. And, shortly after noon on Tuesday, June 7, on what would have been the legend’s 64th birthday, the stretch of road that he made world-famous was formally rechristened “Prince Rogers Nelson Way.”

The commemorative street dedication is the second jewel in the “Crown Our Prince” project—last week’s unveiling of Hiero Veiga’s Prince mural at nearby Ramp A being the first—and fulfills the mission that Sharon Smith-Akinsanya and Joan Vorderbruggen began seven long years ago to make this city “shine purple every day.”

The festivities began across the street on the patio of O’Donovans Irish Pub, and were kicked off by Smith-Akinsanya, CEO of the Rae Mackenzie Group. After moving here in the early 1990s, she soon found herself in the employ of Prince. While admitting to the crowd that she never intended to make Minneapolis her permanent home, she shared something her boss said: “Prince told me, ‘You’ll never leave.’”

Thirty years later, she’s the leader of one of the most successful DEI firms in the world, based right here in the Twin Cities.

“Prince Rogers Nelson Way is not just a commemorative street name or amazing icon for Minneapolis, it is a way of being and making community and creating authentic spaces where people feel like they belong,” she said.

Mayor Jacob Frey and several Minneapolis City Council members were also present at the unveiling. Frey referenced the mural and sign unveiling as another way to bring Minneapolis residents together, something he says Prince did, too.

“That is the legacy we should be living out here in Minneapolis – Prince did every single day,” he said. “He had a way of bringing people from a thousand different perspectives together. This is a really important person to honor and someone we can all rally around.”

Minneapolis City Council President Andrea Jenkins spoke about her love of Prince and his music to the crowd. She said that he challenged ideas of gender and sexuality and led the way for artists. Jenkins also attended the legendary Paisley Park parties.

“He would always be the D.J., he never played a Prince song but kept everybody moving on the dance floor,” she said.

The crowd consisted of dedicated, life-long Prince fans from Minnesota and beyond. Decked out in Prince gear, Judy Washington and Kia Clark traveled from San Francisco for the “Prince Night” Minnesota Twins baseball game on Tuesday evening, but when they heard about the mural and sign unveiling, they said they knew they had to be there, too.

“It is wonderful and beautiful to see him memorialized this way,” Washington said. “It is a little sad when we come, just the memories, but when you get here among all the purple you become happy and forget about it.”

Clark shared she has been an avid Prince fan since she was 3 years old. She and Washington have attended nearly 100 Prince concerts together.

“This is definitely overdue; he is the local hometown hero,” Clark said. “I love him and everything he stood for.”