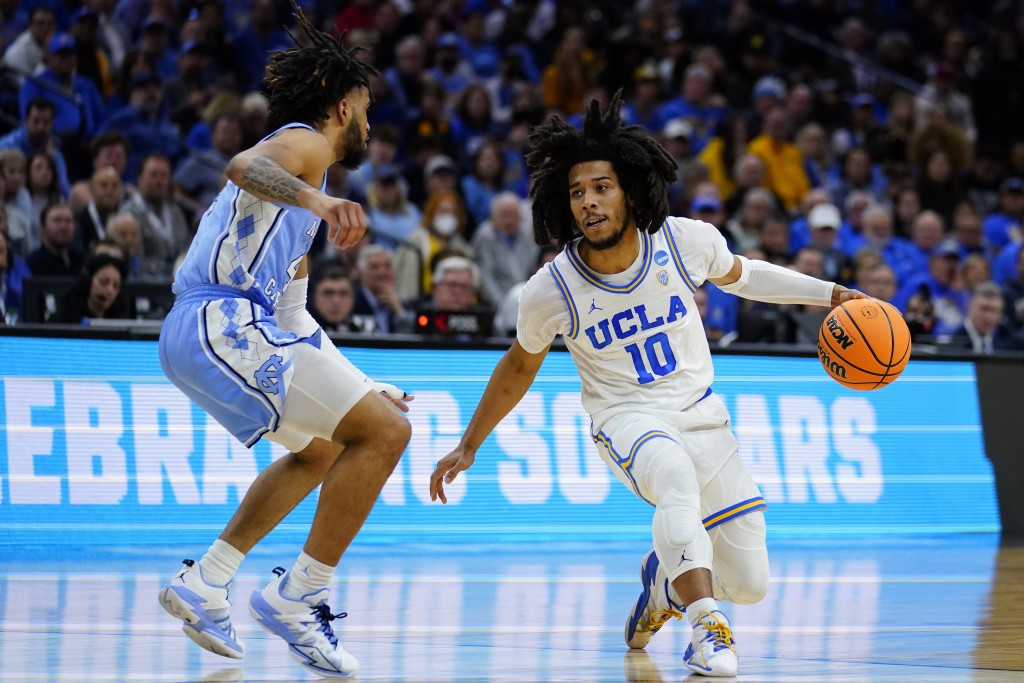 The Bruins came to the City of Brotherly Love looking to find another victory and advance to the Elite Eight.

They may not have left Wells Fargo Center with that win, but they certainly got dealt a heavy dose of Love.

Whether it was 3-pointers, second-chance looks or slashes to the lane, UCLA and coach Mick Cronin were unable to find a way to stop Love, and they watched their late lead slip away as a result. The Bruins were up by three inside two minutes to go, and they had led for the vast majority of the contest to that point.

But when Love pulled up, he sank all the big shots. On the other side of things, guard/forward Jaime Jaquez Jr. missed his last nine shots and guard Johnny Juzang missed his last three, making it a 12-2 run for North Carolina to end the night and send the Bruins back to Westwood earlier than planned.

“I felt like we had a real chance to do something really big,” Juzang said. “It sucks.”

The game started out with a full-on marathon, as there was not a single dead ball in the opening nine minutes of play. In that stretch, four Bruins combined for 18 points, giving their team a four-point at the first media timeout – which was at 11:00 instead of inside 16:00.

UCLA was knocking down nearly all of its jumpers to start, as Juzang knocked down a triple in the opening moments and guard Jules Bernard hit a couple of his own as well. As a team, the Bruins were shooting 8-of-14 compared to the Tar Heels’ 6-of-16 in that opening nine minutes in which neither side could make a substitution.

When the UCLA bench players came in, they were able to pick things up on the defensive end.

North Carolina missed four shots in a row and turned the ball over several times once center Myles Johnson, guard Jaylen Clark and guard/forward Peyton Watson entered the contest. That cold streak coincided with a 9-of-12 stretch on the other end for UCLA, who opened up a 22-14 lead with an 8-0 run.

The Tar Heels closed the gap from there, hitting a pair of 3-pointers and getting a putback slam out of forward Brady Manek to steal back some momentum in the waning minutes of the opening period. The North Carolina bigs – both Manek and center Armando Bacot – dominated on the offensive boards, giving their team an 8-1 advantage in that category to start the night.

Manek was unable to defend Jaquez on the other end, though, and the banged up Bruin worked him on the left block several times to keep UCLA ahead.

After both sides missed shots in the final 10 seconds of the half, UCLA went into the break up 31-28.

Following forward Cody Riley’s layup to open the second half, each side had big runs that tightened things up even more. The Bruins and Tar Heels each had 6-0 runs early on, with the blue and gold’s getting capped off by a major Jaquez slam.

North Carolina then scored seven unanswered to take the lead, sparking a big back-and-forth period that kept either side from pulling away.

Guard Caleb Love hit two layups and a 3, which were separated by a few 3-pointers by Juzang and Clark. Guard Tyger Campbell blew by his defender on the other end and hit a layup that made it six lead changes in a three-minute span, and that helped UCLA start to take a more comfortable advantage.

Love stayed hot, though, hitting another layup and triple to erase the five-point deficit in a matter of a few possessions.

Campbell got past his man for a layup, then found Johnson for a dunk that sent the Bruins back ahead, only for Bacot to hit some free throws and set Manek up for a go-ahead 3-pointer. Bernard made it 62-61 UCLA inside of four minutes with a second-chance bucket, and the Bruins held onto that lead for nearly two minutes as time ticked away.

Campbell scooped a layup in to make it a three-point contest, and it was Love who sank a big second-chance 3-pointer to tie things up again.

With a minute to go, it was Love who launched another 3 off the dribble. Like most of the others, it was good.

“When you give a player like that good looks and he starts knocking them down and getting in a rhythm, they can get hot in this tournament,” Bernard said. “One hot player can send you home.”

Jaquez missed a shot when the Bruins needed one the most, and Bacot got a tip in to all but ice things with 15.5 seconds remaining.

Some garbage time layups and free throws changed the final score, but not the end result. UCLA’s NCAA tournament run had been stopped short in the Sweet 16.

“I’m very proud of them,” Cronin said. “Just try to hammer home to them that you can’t let this loss define your career because we all know – especially those of us from LA in here – what they’ve done to turn our program around.”

Bernard was the only Bruin who managed to be half as productive offensively as Love, scoring 16 points. Campbell put up 15, Juzang dropped 14 and Jaquez added 10, but none of them were enough to match Love’s torrid performance.