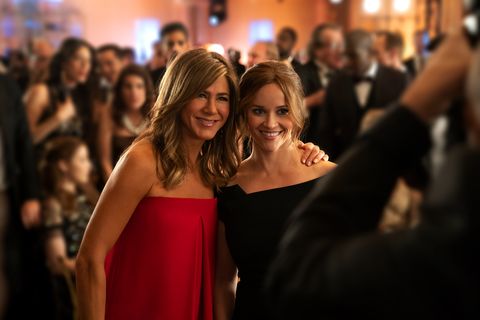 Season 2 of The Morning Show starring Reese Witherspoon and Jennifer Aniston premieres on Apple TV+ tonight. Witherspoon and Aniston play competitive, morning TV anchors for a company that’s in the midst of a major MeToo scandal. But, to keep the show topical, writers made significant changes so that the pandemic would be part of the narrative.

When the coronavirus hit the U.S., the writing and production of The Morning Show’s new season was well underway. The entire season had been “broken,” as they say in Hollywood. Kerry Erhin, an executive producer and showrunner of the fictional TV series says, “It’s a year of working in a writers’ room, breaking down the stories scene by scene.”

In other words, a year’s worth of work had to be largely undone.

Making a prestige TV show with major stars and a big crew is expensive. Executive producer Michael Ellenberg says, when COVID forced them to shut down production, they had huge issues to sort out.

“If you simply have to rewrite the first two episodes and re-break a giant portion of your season midstream that’s, from a production perspective, an earthquake,” says Ellenberg. “And then the other thing we were managing is, can we actually make this thing safely?”

What to do with the storyline was another matter. The Morning Show already explores hefty themes like how individuals and corporations respond to systemic sexism and racism. Ehrin remembers getting a call from an executive from Apple TV suggesting the pandemic also be part of the narrative.

“I really resisted that for about a day because we had just, you know, broken an entire season,” she says, recalling the dreaded moment. “And then after another day, like, it just made sense. It isn’t a subject you could avoid, especially doing a show about people covering the news.”

Fictional correspondent Daniel Henderson, played by Desean Terry, is the first to raise the pandemic in the newsroom. Terry says this was a case of life and art intersecting. The characters in the TV show faced the same level of uncertainty as the cast did in real life. He says, early in the pandemic, they didn’t know exactly how to protect themselves.

“Face shield? Mask? When do you take the mask off? We were figuring it out as we go,” Terry remembers. “I think back to the first group scene that we shot, we were now shooting under completely different circumstances. And so there was a little bit of awkwardness and uncomfortability between us.”

Season 1 also had to be refocused — because of #MeToo

This was the second time The Morning Show cast and crew had to rework episodes because of real world events. Originally inspired by Brian Stelter’s 2013 book Top of the Morning: Inside the Cutthroat World of Morning TV, Apple TV’s fictional series always intended to look at the on and off-screen relationships in the competitive world of morning TV news, including how women are treated. Season 1 episodes had been largely mapped out when the bombshell reporting on Harvey Weinstein led to take-downs of other media figures including NBC’s morning anchor Matt Lauer. Michael Ellenberg says, while it wasn’t a “wholesale rewrite,” changes were made to put sexual misconduct into sharper focus.

While the pandemic is the main thrust of the new season, the storylines that explore social injustices continue. Kerry Ehrin says she always wanted “the second season to be about the kind of shifting tectonic plates under society where things were starting to change and people were trying to figure out who they were.”

Those “shifting tectonic plates” have now moved twice and a lot more than anyone on The Morning Show ever expected.

But Ellenberg says Jennifer Aniston and Reese Witherspoon, who are both the leads and executive producers on The Morning Show, have always wanted the series to speak “to the times we’re living in.”

“No one’s dying to have to redo anything,” he says, “but, you know, they love what they do. We all love what we do.”

Ellenberg says they’ve also learned a lot about the challenges of the news business: “When you’re topical, it’s really exciting and it’s really complicated. You know?”

The cast and crew hope if season 3 needs changes, it’s because of positive news.