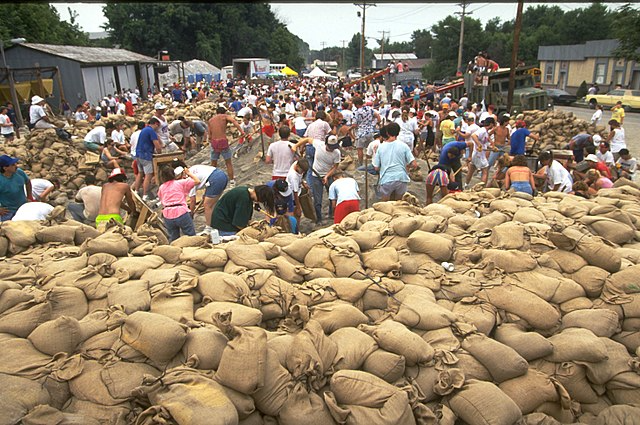 Will Hill stood outside his Northwest Jacksonville home with gratitude in his heart.

Earlier Wednesday, more than 50 volunteers filled bags and delivered them to residents on Ken Knight Drive — an area inundated during Hurricane Irma — to protect the neighborhood from Hurricane Ian.

Hill lives along Ken Knight with his mother and other family members. Their home backs into the Ribault River. He did not know the names of the volunteers, but he said their commitment is the essence of community.

“I feel like somebody finally got a heart, got a mind and understand it’s not always the person that’s homeless or on the streets that need, or the person that got a lot of money that need or whatever,” Hill said. “It’s the old lady that’s sitting in her yard all day long playing with her fire bucket that’s gonna need help, that can’t walk to the back of her back door to put her bags down or whatever, or the neighbor that needs her yard cut.

“You know, it’s just a community starting to come together. For when I grew up out here, this wasn’t a community to grow up with.”

When Hurricane Irma struck Florida in September 2017, it caused widespread flooding in Jacksonville, particularly near the Ribault and Trout rivers. Some residences along Ken Knight Drive still have tarps on top of them dating back years.

Hill says the volunteers are fostering trust in the Washington Heights Estates neighborhood because they have shown up long before the storm threatened the region.

“That has not been a relationship that came and went,” McMath said. “We all still have relationships in that community and are there regularly. So, when I got the call that said ‘Everybody’s asking for sandbags.’ This is the result: a simple call out to the community to say who can meet, who can help. And you see what’s happened.”

McMath said the volunteers were the best of Jacksonville because there were a cross section of River City residents.

“We had students here. We had families here. We had elected officials here. We had teachers here,” McMath said. “We had people of every age of every race and really representing every corner of the community from the Northside to Oceanway to Riverside to the beaches to Arlington to Downtown. That group of 50 people, I really feel like, is Jacksonville.”

“There hasn’t been a lot of community outreach because of COVID,” Flaven said. “It’s nice to see people help their community, even strangers. … We are all we have. Without the community, we are nothing.”

Kenneth Williams was a stranger to Grace and her family before Wednesday morning. But, Williams needed help to secure his property in a different section of Northwest Jacksonville.

“It means a whole lot,” Williams said. “I need sandbags. I’m thankful they are doing this for the community. You have a lot of people who won’t do that.”

Back on Ken Knight Drive, as morning turned to afternoon, the threatening skies began to open up. Wind and rain fell, and the Ribault River made its march up the banks toward the townhomes.

All the while, two boys played in the park. They shot hoops and threw rocks at each other as children their age would on an ordinary Wednesday afternoon.

It was the type of activity Hill hopes will return to the neighborhood. It will keep children occupied and less likely to be swayed by the temptations that he admits are nearby.

“Seeing people coming through and helping when they ain’t got to help … that made me feel a whole lot better,” Hill said. “(It) made me feel a lot stronger.”