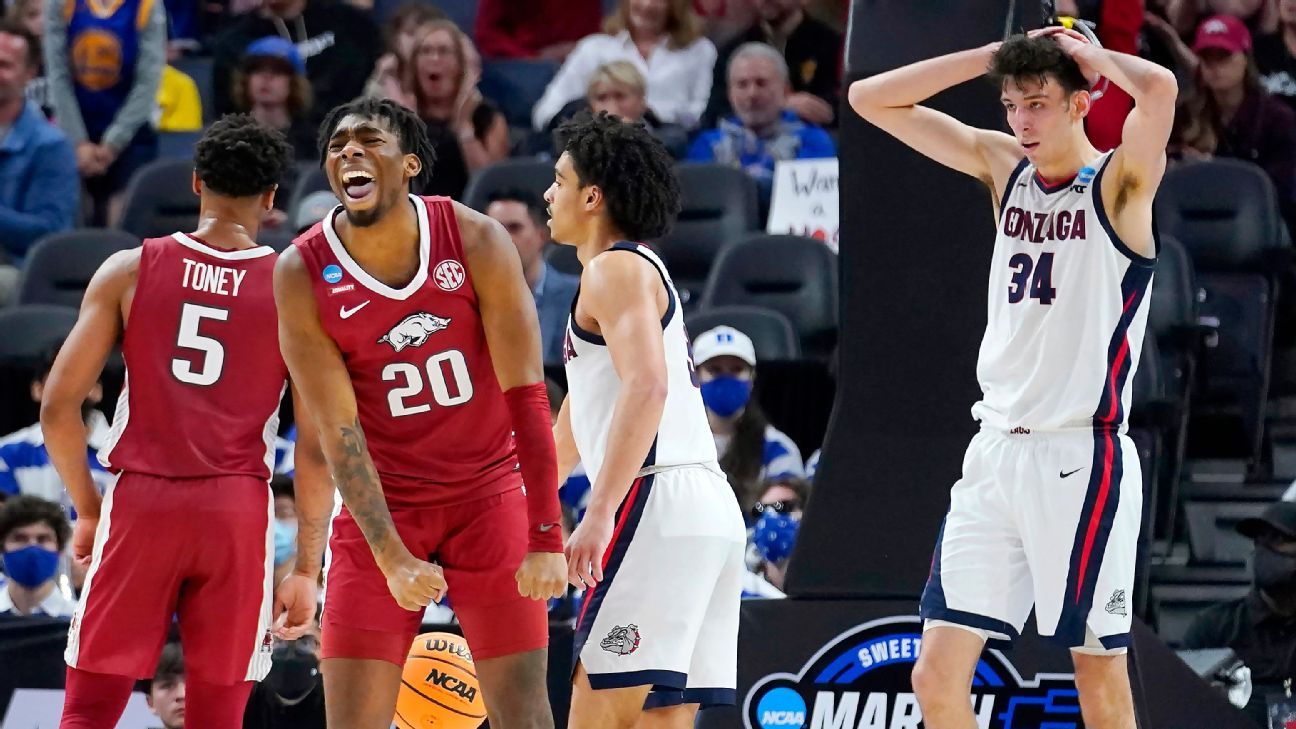 Twenty years ago, Eric Musselman was introduced as the new head coach of the Golden State Warriors. And two years later, he was fired after missing the playoffs in back-to-back seasons.

Thursday night, however, Musselman found success in the Bay Area when he led his Arkansas squad to a 74-68 upset of Gonzaga, the top overall seed in the NCAA tournament and last year’s national runner-up.

Arkansas is headed to the Elite Eight for the second year in a row but just the third time since 1995. The Razorbacks will face second-seeded Duke (31-6) on Saturday for a trip to the Final Four.

For Musselman, who became the sixth coach to reach the Elite Eight in each of his first two NCAA tournament appearances with a school since 1985, his full-circle moment continued with Thursday’s bracket-busting victory. Recalling the day he was fired by the Warriors, he told reporters Wednesday that he could never have imagined then that he would one day be coaching in the Sweet 16 in the Bay Area.

After ousting Gonzaga, Musselman kept the focus on his players, praising them for grinding out a tough, physical game plan for all 40 minutes.

“We just wanted to be physical, plain and simple,” Musselman said. “We wanted them to feel bodies. Obviously they played a really tough schedule early in the season, but it’s been a long time in conference play since they faced a team like us.

“Can’t compliment these guys and the entire team enough for the way that they buy in to game preparation. It’s probably the coolest thing I’ve ever been a part of that they just kind of do what we ask.”

Razorbacks sophomore forward Jaylin Williams said his team played with a chip on its shoulder against the tournament’s No. 1 seed.

“We’ve been disrespected the whole year, so it’s just another thing for us,” Williams said. “We saw everything they were saying, we felt like they were dancing before the game. That was disrespect for us. We just came into the game playing hard and we had a chip on our shoulder. Every game we do.”

Gonzaga made things interesting late, getting within three when Andrew Nembhard hit a 3-pointer with 16.5 seconds to play. But Chris Lykes, an 87% free-throw shooter, made a pair to extend the Razorbacks’ lead back to five. Au’Diese Toney’s block on Nembhard’s layup at the other end ended any hopes of a Bulldogs comeback. Toney’s dunk with a second to play punctuated the moment.

“It’s always just so tough when it finally ends, especially short of the goal we all had,” Few said. “First time we lost in this round in quite a while. But, again, all the credit goes to Arkansas. Their defense was pretty just tough to get any rhythm against. I think we never really got any sort of rhythm in the first or the second half. To me that was the difference in the game.”

Arkansas turned the corner in this game with a couple of significant runs.

In the first half, Chet Holmgren — a projected top-three pick this summer in ESPN’s latest mock draft — picked up his second foul with Gonzaga leading 22-17 and didn’t return until the second half. Arkansas then went on a 15-7 run, turning the game in its favor.

Holmgren picked up his fourth foul midway through the second half, and Arkansas extended its lead to eight points shortly after he left the game. Holmgren eventually fouled out with 3:29 to play.

“Chet, I thought, was playing good, and he was getting to his shots, and we were trying to call his number and get him some more actions when we could, but, yeah, that was hard,” Few said of Holmgren. “That was difficult because I felt it was one of those games where he was able to get his touches, Drew was able to get his touches, and we just needed to kind of — without wearing Drew out — we needed Chet to be able to stay in there a little longer. … We’re so different on defense when he is in there with his rim protection.”

JD Notae, who scored 21 points, stole the show. Notae had averaged 17.5 points through his team’s first- and second-round wins over Vermont and New Mexico State. He was lukewarm from the field, shooting just 9-for-29, but he seemed to be involved in every play on both ends of the floor. A pump-fake 3-pointer with 6:33 to play in the game extended Arkansas’ lead to nine points.

Near the five-minute mark, he came up with a loose ball, and Williams hit a 3-pointer to drive up Arkansas’ lead again. Notae was everywhere. It was his drive that cost Holmgren a fifth foul.

Gonzaga had entered this tournament as the favorite to win it. Few had led his team to two of the past four national championship games. With Drew Timme returning and Holmgren arriving, the Bulldogs clearly had the makings of a real contender.

In the end, however, Gonzaga missed the mark on too many shots Thursday night. The Bulldogs entered the game shooting 37.2% from the 3-point line, a top-25 mark nationally, but they missed 15 of their first 19 3-point attempts against the Razorbacks.

Timme (25 points) did all he could. But Holmgren’s foul trouble put him in a tough spot and limited his opportunities. Timme and Nembhard also had five turnovers apiece. It just wasn’t Gonzaga’s night. And when that happens in the NCAA tournament, the morning’s aren’t great, either.

It’s unclear what happens next for Gonzaga. Timme could return or pursue his dream of playing at the next level. Holmgren (11 points, 14 rebounds) will most likely declare for the NBA draft. And Few will attempt to make another run toward his school’s first national championship.

An emotional Timme addressed his teammates afterward, then fought tears during a postgame news conference.

“It was a hell of a ride,” Timme said. “It didn’t end up the way we wanted, but we came to play hard. It was their night.”