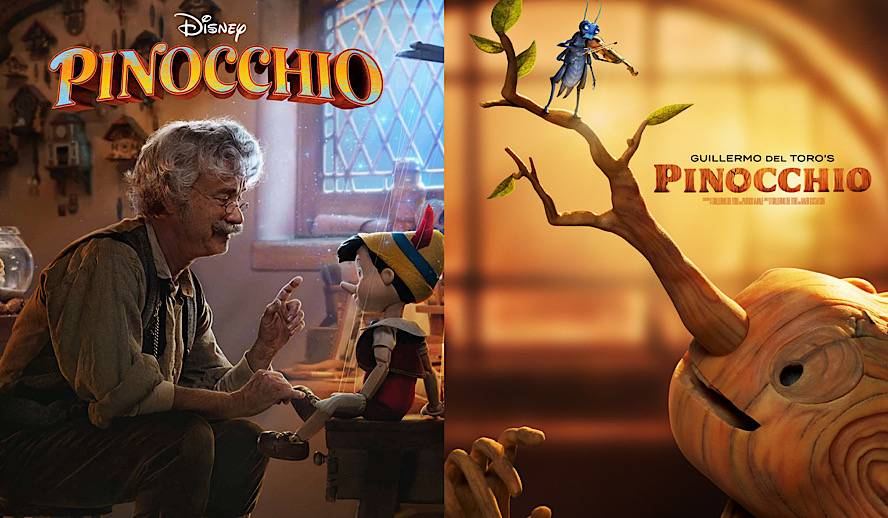 In a year of movie delays and shuffled release slates, it seems odd that we’ve had two outings for Pinocchio, the lying puppet who wants to become a real boy.

Alongside Robert Zemeckis’ Disney-fied version that sits alongside live-action movies like The Lion King, Beauty and the Beast and Dumbo, we’ve got Guillermo del Toro’s Pinocchio more faithful retelling of the source material now available to watch on Netflix.

If you thought being swallowed by a whale, a con artist fox and Jiminy Cricket leering at can-can girls made Pinocchio one of Disney’s more mature movies, that’s nothing compared to Carlo Collodi’s original story The Adventures of Pinocchio.

Here’s what the House of Mouse cut from the original tale of that pint-sized puppet, and why Guillermo del Toro’s Pinocchio is actually more of a faithful retelling of the Pinocchio tale.

Originally published in 1881 as part of Italy’s Giornale per i bambini magazine for children, The Adventures of Pinocchio was anything but child-friendly.

It opens with a man called Mastro Cherry, chopping a log that bizarrely starts giggling. Creeped out by the whole thing, Cherry gives it to his lonely pal Geppetto who’s been looking to make a marionette.

Even when carving him, Pinocchio calls Geppetto “cornmeal mush” because of his yellow hair, which causes the creator and Mastro Cherry to get into a fight.

As soon as the log takes on his Pinocchio persona, he kicks Geppetto in the face and runs off. When the police catch up with Pinocchio, Geppetto is accused of assaulting him and the hapless puppet maker is carted off to prison in front of the villagers.

Pinocchio takes up residence in Geppetto’s empty home and dries his feet by the fire after a neighbour dumps a bucket of water on him. He wakes up to find his feet have been burned off like some sort of A Nightmare on Elm Street horror.

When Geppetto is released from prison and builds Pinocchio a new pair of feet, he sells his only coat so his ungrateful ‘son’ can have a book to go to school with. Pinocchio repays this favour by selling the book to visit a marionette show.

While there, an evil puppet master wants to use Pinocchio as firewood to cook his lamb supper. There’s still the cunning Fox and Cat, but here the latter eats a blackbird who is trying to warn Pinocchio they are bandits. The Cat gets its comeuppance and has its paw bitten off by the vengeful Pinocchio.

But it’s favourites like Jiminy Cricket and the Blue Fairy that really get the short end of the stick in The Adventures of Pinocchio.

Originally called the Talking Cricket, OG Jiminy has a minor role in The Adventures of Pinocchio and is killed when he’s mushed against the wall with a hammer while trying to give Pinocchio advice.

The Fairy arrives after the Fox and Cat have hung Pinocchio from a tree and he’s declared “dead”. This was where Collodi wanted the story to end – as a message to naughty children – but his publishers demanded it to continue.

Making Bambi look like Winnie the Pooh, death is pretty much everywhere. Pinocchio meets a snake that dies from a burst artery for mocking his misfortune, while he’s also haunted by the ghost of the Talking Cricket.

Pinocchio and his pal Candlewick are both turned into donkeys, and although Pinocchio changes back, it’s only after a fisherman tries to drown him and fish eat the skin off his donkey carcass to reveal his puppet form. Pinocchio later encounters a dying Candlewick, who is still a donkey and expires from exhaustion before he can be saved.

Instead of being swallowed by a whale, Geppetto and Pinocchio end up in the stomach of shark – after all, sharks are scarier. They only manage to escape because it has heart troubles and asthma, so sleeps with its mouth open.

Much like the Disney version, the moral of the story is to work hard to get what you want, but even The Adventures of Pinocchio’s end is decidedly dark. Geppetto and the newly-human Pinocchio keep the marionette around. Lying there like a puppet corpse, the story closes with Pinocchio laughing that he could have ever been a lump of wood.

Although del Toro couldn’t fit everything into his version, there are spins on the burnt-off feet and the forced labour plots from the original novel. Even without being a literal adaptation though, it’s more faithful than the same watered-down version we saw Tom Hanks in earlier this year.

So, if you’re a concerned parent ready to plonk your children in front of Guillermo del Toro’s version, you might want to think twice about letting them watch Pinocchio.