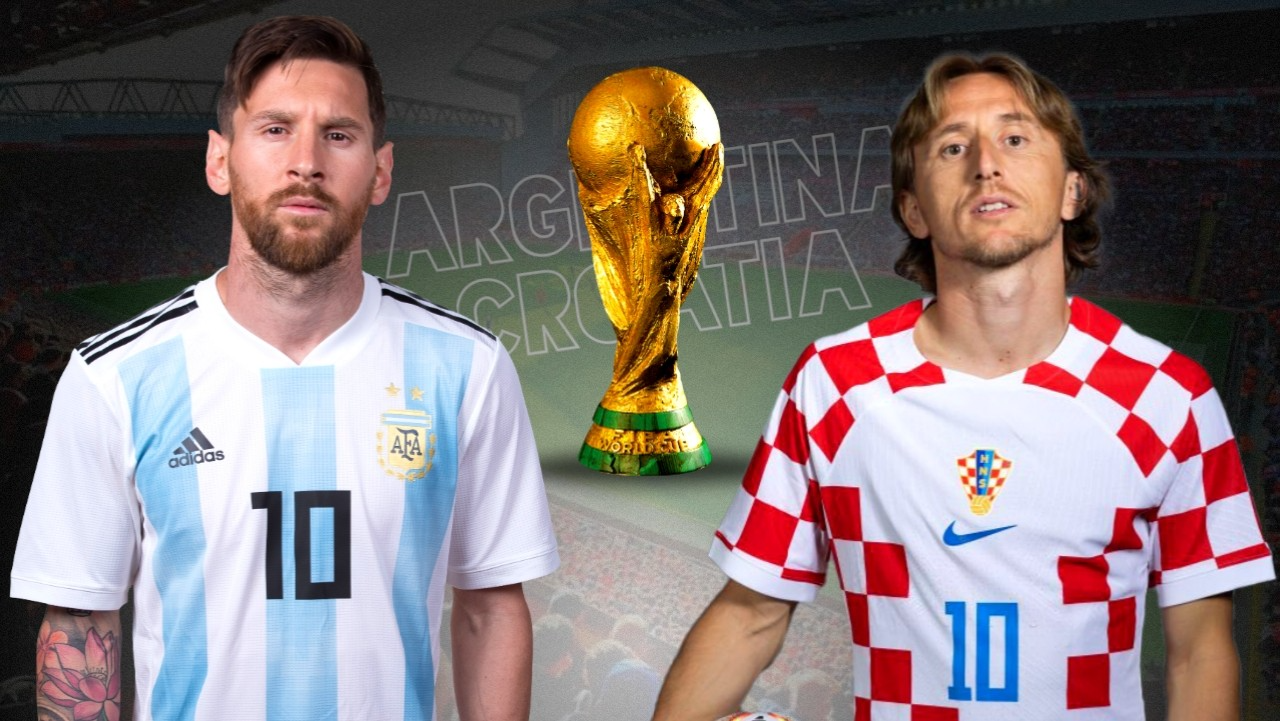 The first semifinal at the 2022 FIFA World Cup is set, with Croatia taking on Argentina for a spot in the final.

Argentina scrapped over the line against the Netherlands in their quarter-final fixture via penalty shootout. Lionel Messi put in a brilliant performance getting himself a goal plus an assist during regulation time. The Dutch team managed to save some hope after Wout Weghorst scored in the 83rd minute and late into stoppage time. Things got feisty in extra time and Denzel Dumfries was shown a red card.

The Croatians also had to endure a tough ordeal in their Round of 16 fixture against Brazil. The Selecao led through a superb Neymar goal in extra time but Bruno Petkovic equalised in the 117th minute. Luka Modric and Co defeated the Brazilians in penalties as Dominik Livaković was their hero between the posts once again.

Croatia were triumphant the last time they faced Argentina in the group stages of the 2018 FIFA World Cup. It will be interesting to see how things pan out this time around with a spot in the finals of the 2022 FIFA World Cup on the line

All the information you need on Argentina and Croatia’s World Cup 2022 semi-final, which takes place at Lusail Stadium on Tuesday.

Argentina vs Croatia: when and where?

Argentina and Croatia’s World Cup 2022 semi-final will kick off at 10pm local time(Qatar) on Tuesday 13 December 2022; in the United States, that’s 2pm ET/1pm CT/11am PT. The match will be played at the 89,000-capacity Lusail Stadium, which will also be the venue for this weekend’s final.

How can I watch the game on TV/online in the US?

TV viewers in the US will be able to tune in to Argentina vs Croatia on FOX Network and Telemundo. If you’re looking to watch the game online in the States, you can do so on Foxsports.com and the FOX App, while the streaming services fuboTV and Peacock are also options.

Watch a live stream of Argentina vs Croatia on fuboTV.

According to Indian Standard Time (IST), the match will begin past midnight at 12.30 AM (December 14, Wednesday). The semi-final between Argentina and Croatia will be telecast live on the Sports18 channel in India. The live streaming of the match will be available on the Jio Cinema website and the app.

How did Argentina and Croatia get to the semi-finals?

Despite a shock opening-game defeat to Saudi Arabia, Argentina topped Group C, before edging past Australia in the last 16. That set up a quarter-final with the Netherlands that has since been dubbed the ‘Battle of Lusail’. In all, 14 players were booked and one was sent off – Dutch full-back Denzel Dumfries – in a dramatic, ill-tempered match that went the distance.

Goals by Nahuel Molina and Lionel Messi seemed to have won it for Argentina in normal time, but substitute Wout Weghorst hit a late double – his second goal arriving in the 11th minute of stoppage time – to force extra time. The tie was finally settled from the spot, Lautaro Martínez netting Argentina’s winning penalty after Virgil van Dijk and Steven Berghuis had both missed for the Netherlands.

As for Croatia, who have the chance to reach a second straight World Cup final, Qatar 2022 has cemented their status as extra-time experts. Only one of their last nine major-tournament knockout ties has been settled inside 90 minutes.

After qualifying from Group F behind surprise package Morocco, Zlatko Dalic’s men squeezed past Japan on penalties in the last 16, before needing extra time and spot-kicks once more when they faced favourites Brazil in the quarter-finals. In the second half of the additional period, the Vatreni appeared to be sunk when Neymar scored a fabulous solo goal for the Brazilians – but, as people used to say about Germany, you can never write off the Croats.

Bruno Petkovic levelled three minutes from time, and having already kept out three spot-kicks against the Japanese, goalkeeper Dominik Livakovic saved from Rodrygo Goes to help Croatia to another shootout win. Four of the country’s last six World Cup knockout matches have gone to penalties, and they’ve been victorious on all four occasions.

Messi, likely playing at his final World Cup, is leading the charge for Argentina as he looks to add the trophy to his collection.

The 35-year-old has both scored and assisted a goal in three different World Cup matches, including two at this year’s tournament (vs. Mexico in the group stage and the Dutch in the last round).

Since 1966, no player has ever done so in four separate games.

Marcelo Brozovic has been excellent as a deep-lying playmaker for Croatia, and the Inter midfielder might well be crucial to stopping Messi.

In the quarter-final win over Brazil, Brozovic completed 96 passes – a tally that only team-mate Luka Modric (105) attempted more than.

If Brozovic can work alongside Modric and Chelsea’s Mateo Kovacic to block off the central space and force Argentina wide, then they might just be able to limit Messi’s influence.