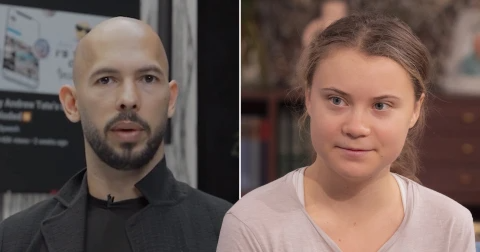 On Tuesday, Tate took it upon himself to tweet in Thunberg’s direction – boasting of his car collection in a swipe at her environmental crusade.

“Please provide your email address so I can send a complete list of my car collection and their respective enormous emissions.”

After stewing on it for over a day, Thunberg responded late Wednesday night (AEST).

“Yes, please do enlighten me. Email me at smalld**kenergy@getalife.com,” she replied to Tate.

“How dare you?!,” a humiliated Tate later wrote back, mocking her iconic catchphrase.

Tate has amassed a significant following on Twitter since being re-platformed amid the Musk takeover.

“I did not see ‘Greta burns Tate’ on my bingo card,” one person wrote.

“I’d like to report a dead body,” another said.

“Greta Thunberg electrifies the crowd with a first round KO of Andrew Tate,” actor Billy Baldwin weighed in.

The exchange was a rare glimpse at the reactive side of Thunberg, who cops plenty of criticism of her own, with her social media feeds seldom veering away from her primary climate and environment agenda.

Thunberg burst onto the climate activism scene in spectacular fashion after convincing her family to make significant lifestyle changes to lower their carbon footprint.

She started school climate strikes in 2018, which were quickly adopted across the globe in what has been dubbed “the Greta effect”.

Perhaps most notably, she addressed world leaders in September 2019 at the UN Climate Action Summit in New York City.

“This is all wrong. I shouldn’t be up here,” she told the forum.

“I should be back in school on the other side of the ocean. Yet you all come to us young people for hope.”

“How dare you! You have stolen my dreams and my childhood with your empty words.”