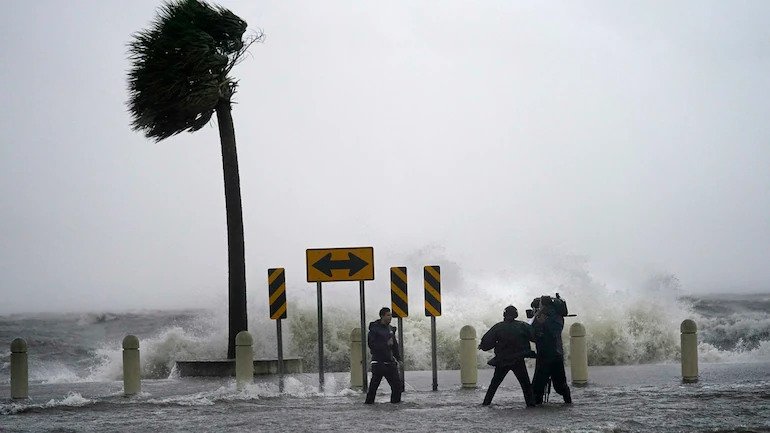 New York declared a state of emergency early Thursday morning as the Northeast region was slammed by torrential rain from the remnants of Ida, causing heavy flooding and reports of numerous water rescues.

In New York City, a travel ban was implemented until 5 a.m., according to an emergency alert sent by Notify NYC. All non-emergency vehicles must stay off the road, the alert said.
Almost all the city subway lines were suspended due to the flooding. The Metropolitan Transit Authority website said that only the “7” line and the Staten Island Railway were operating with delays.
“We’re enduring an historic weather event tonight with record breaking rain across the city, brutal flooding and dangerous conditions on our roads,” New York Mayor Bill de Blasio said on Twitter.
“We will have a tough few hours coming up until we get the rain out of here,” de Blasio told CNN affiliate WCBS. “I have never seen this much rainfall this quickly. It is absolutely astounding … We are talking three inches, four inches in an hour. Unbelievable accumulation.”
New York Gov. Kathy Hochul told CNN the rain was “far more than anyone really expected,” and left the region in “a very dire situation.”
“We can take all the precautions in advance, and we did deploy our assets to be on the ground in anticipation, but mother nature will do whatever she wants, and she is really angry tonight,” Hochul told CNN’s Don Lemon.
The National Weather Service in New York urged people to stay off the roads. “We are seeing way too many reports of water rescues and stranded motorists. Do not drive through flooded roadways. You do not know how deep the water is and it is too dangerous,” the weather service said.
Rescuers have been removing people from flooded roadways and subways across New York City, the New York Fire Department said Thursday morning. There are no reports of significant or critical injuries in the city at this time, FDNY said.
At least five flash flood emergencies were issued Wednesday evening by the National Weather Service, stretching from just west of Philadelphia through northern New Jersey. Dozens of water rescues were taking place and numerous roads have been closed.
In New Jersey, Gov. Phil Murphy also declared a state of emergency, urging residents to “stay off the roads, stay home, and stay safe.”
People were being pulled from cars stuck underwater in Passaic, New Jersey, according to Mayor Hector Lora. “We are at a point where there are certain areas of the city where we can’t even send out emergency responders because of potential danger,” Lora said in a video posted to Facebook.
The latest flash flood emergency included Newark, the state’s largest city. Rainfall estimates for parts of central and eastern Pennsylvania and New Jersey ranged from 4 to 8 inches of water with some isolated locations approaching 10 inches. Some parts saw 3 to 4 inches of rain an hour throughout Wednesday evening.

“Five inches of rain just doesn’t happen in this region very often,” said CNN meteorologist Brandon Miller. “We could easily see some deadly flash floods like we saw in Tennessee last week.”
A flash flood emergency was also issued for New York City and extended until 3 a.m. ET, according to the weather service, covering Manhattan, Queens, the Bronx and areas as far north as White Plains. The area has already seen between 2 and 3.5 inches of rain in just several hours and rainfall rates are expected to be as high as 3 to 5 inches an hour for the rest of Wednesday.
Heavy rainfall will also continue in northern New Jersey and eastern Pennsylvania for the rest of Wednesday evening, while overnight impacts will continue in southern New York, stretching into Connecticut, Rhode Island and Massachusetts.
A person died due to flooding in the Guesses Fork area of Hurley, Virginia, the Buchanan County Sheriff’s Office said. People were asked to stay away from the area, according to the sheriff’s office, and only residents who showed ID proof and authorized personnel were allowed to enter Wednesday night.
In Maryland, one person died and another is missing after the remnants of Ida flooded an apartment complex Wednesday, Montgomery County officials said. The 19-year-old man was found dead but the cause has not been confirmed, Montgomery County Police spokesperson Casandra Durham told CNN.
Fire and rescue personnel evacuated dozens of people from the Rock Creek Woods apartment complex in Rockville, officials said. About 150 residents were displaced after 50 apartments were impacted and 12 flooded, police said.
A tornado touched down in a primarily commercial area of Annapolis on Wednesday afternoon, fire department spokesperson Bud Zapata said. No injuries have been reported but some private residences were damaged and there is an active gas leak in the area, Zapata said. Maryland Gov. Larry Hogan said on Twitter his office was working with city and county officials to assess the damage.
Power outages were reported throughout the region as the severe weather moved through. More than 109,000 customers in Pennsylvania were in the dark Thursday morning, according to PowerOutage.us. More than 87,000 outages were reported in New Jersey along with more than 37,000 in New York.

Ida made landfall in Louisiana on Sunday as a Category 4 hurricane, and though it has weakened significantly since, it has still dropped heavy rain across the Southeast on its way north. More than 60 million people are under flash flood watches for parts of the central Appalachians, mid-Atlantic, and into southern New York and southern New England.