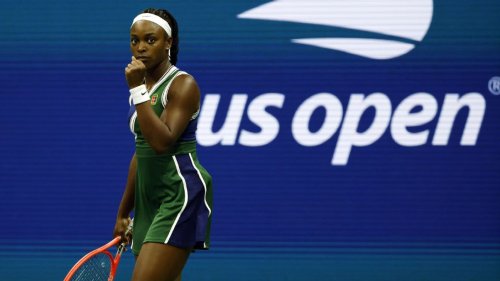 Stephens relied on her experience as the 2017 U.S. Open champion, and her wicked forehand, to outmaneuver the 17-year-old Gauff in straight sets, 6-4, 6-2.

The guard is changing in women’s tennis, and with Serena Williams not playing this year’s U.S. Open, the night session in Arthur Ashe Stadium on Wednesday was left to the leaders of the generations of American players who have followed.

On one side of the net was Sloane Stephens, 28, and the 2017 U.S. Open champion. On the other was Coco Gauff, the youngest player in the top 100 at age 17 and the highest seeded American left in either singles draw, at No. 21.

Both are based in South Florida and they have known each other for years, but had never faced each other on the professional tennis tour. Though Gauff is the higher-ranked player, Stephens took control of the match and never relinquished it to win 6-4, 6-2, in just one hour and six minutes.

With heavy rain drumming on the closed roof, it was difficult to hear the ball bounce or the calls of “out” from the prerecorded voice that is used in the electronic line calling system.

But hearing was not required to grasp the power and precision of Stephens’s forehand. It is her signature shot, once judged the best in the women’s game in a New York Times poll of players and coaches, and it was the decisive shot against Gauff.

“The forehand was key today,” Stephens said. “I wanted to come out here and really execute and play my game, and I was able to do that well, and I’m really pleased with how I played.”

Stephens hit eight winners with the forehand: bolts from the baseline and well-struck passing shots when Gauff pushed forward. But that number did not sum up the damage. Stephens also rushed Gauff repeatedly with the shot, forcing errors even off Gauff’s more reliable wing, the backhand.

Stephens varied the pace, but she also brought the pace when she felt it was required, and she struck the balance just right.

She served effectively, putting 84 percent of her first serves in play and winning 80 percent of the points when she did so. Her average serve speeds were significantly lower than Gauff’s, but her precision was superior.

When the match ended decisively with a love hold, Stephens quickly transformed into a supportive rival, telling Gauff “I love you” and hugging her at the net.

“I think everyone knows I love Coco,” Stephens said. “She’s such a great player, and I feel so lucky to have seen her grow up and see her play from when she was like 8 years old. I have seen her game really transition and change. I’m really proud of the player she is and the girl she is and the woman she is becoming.”