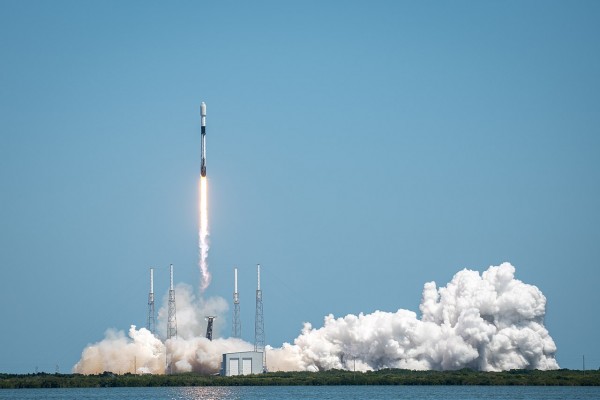 SpaceX just launched the first of four planned Falcon 9 rocket launches this month, with its workhorse rocket carrying a stack of 48 Starlink satellites and two BlackSky Earth observation satellites into orbit, before sticking a booster landing at sea.

“The Falcon has landed,” SpaceX representatives said on the live broadcast. “You can hear the cheer and applause and there’s the visual; this first stage booster has landed a total of nine times.”

The successful liftoff marked the second upgraded batch of Starlink satellites to launch from Florida on one of its 229-foot-tall (70 meters) workhorse Falcon 9 rockets in six months. (SpaceX also launched a Starlink mission from its California-based launch pad in September.)

The company set a rapid launch pace earlier this year but briefly paused for a few months to upgrade its own broadband internet satellites, which are now equipped with laser-based systems to communicate with each other in orbit, and less with the ground, the company has said.

About nine minutes after liftoff, the rocket’s first stage returned to Earth, touching down on SpaceX’s drone ship “A Shortfall of Gravitas” for a successful upright landing. The ship is the newest member of SpaceX’s recovery fleet, bringing the total number of mobile landing platforms up to three. It resides in Port Canaveral, supporting East Coast launches alongside its counterpart “Just Read the Instructions.” (The company’s drone ship “Of Course I Still Love You” is currently based in California, catching rockets that return to Earth off the coast of California.)

SpaceX officials said that due to the delays with its most recent crew launch to the International Space Station, Just Read the Instructions was forced to stay out at sea, braving waves ranging from 20 feet to 25 feet (6 to 8 m) high. Although the drone ships are designed to withstand those wave heights, the teams opted to switch out the ships (and the crew) so teams would be fresh for both launches.

SpaceX’s Starlink megaconstellation is designed to provide high-speed internet coverage to users around the world below, particularly those in remote and rural areas that do not have access to traditional internet connections.

To date, SpaceX has launched almost 1,900 flat-paneled broadband satellites, with just under 900 launched in 2021 alone. The company has approval for 30,000 more satellites, with the option for as many as 42,000.

The Falcon 9 rocket on today’s launch, called B1060, is a flight-proven booster that has now flown nine times. It made its debut in June 2020, carrying an upgraded GPS satellite into space for the U.S. Space Force. Its other payloads have included another rideshare mission called Transporter-2, a communication satellite for Turkey and five additional Starlink missions.

The flight marked the 27th launch of 2021 for SpaceX and the 32nd dedicated Starlink launch for the company’s burgeoning constellation. It also marks the 130th overall flight of a Falcon 9 rocket, and the 115th from Florida.

Along with the rocket’s first stage, SpaceX also recycled the clamshell-like protective hardware that encases the payload. Called a payload fairing (or nose cone), the two pieces account for one-tenth of the rocket’s cost SpaceX officials have said. Each piece fetches $3 million, so reusing them helps keep down costs.

Equipped with navigation software and parachutes, the fairings will gently splashdown in the Atlantic Ocean where they will be retrieved by one of SpaceX’s recovery vessels to be refurbished for a future flight.

Tonight’s SpaceX launch is the first of a global launch doubleheader. Just over 24 hours later, at 7:23 p.m. EST on Friday, Dec. 3 (0023 Dec. 4 GMT), an Arianespace Soyuz rocket will carry two new Galileo navigation satellites into space from French Guiana. The satellites are the European counterpart to the Global Positioning System (GPS) satellites we use here in the U.S.

That launch was delayed 24 hours due to an issue with a tracking station downrange of the launch, Arianespace officials said on Twitter.

Tonight’s Falcon 9 launch marks the first of five launches planned to lift off from Florida in December. The next mission, scheduled for Sunday morning (Dec. 5), features a United Launch Alliance (ULA) Atlas V rocket carrying a mix of payloads for the U.S. Space Force. One such payload features a new laser communication system for NASA called the Laser Communications Relay Demonstration.

Also on deck is NASA’s Imaging X-ray Polarimetry Explorer (IXPE) mission, scheduled for Dec. 9; a communications satellite for Turkey (Turksat 5B), scheduled for Dec. 18, and finally a cargo resupply mission which is slated to carry cargo to the International Space Station on Dec. 21.