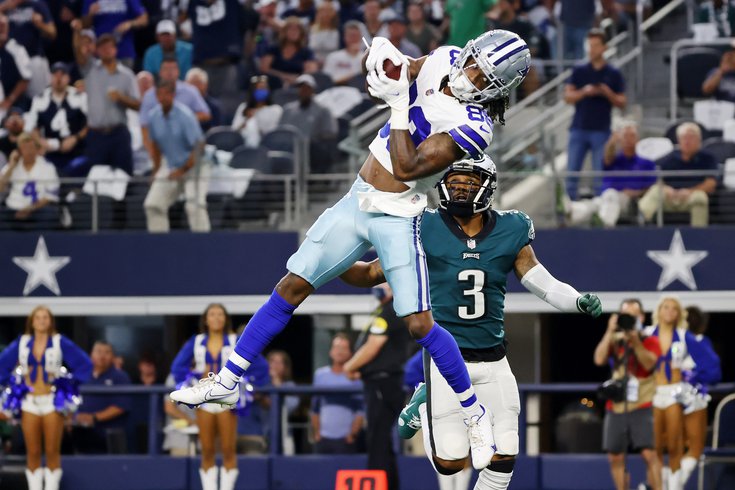 Through their first two games, the Philadelphia Eagles managed to stay relatively healthy, but they will enter Week 3 without their starting LT in Jordan Mailata, their starting RG in Brandon Brooks, and their best DE in Brandon Graham.

Luckily for the Eagles, the Cowboys’ defensive line is extremely depleted. Here are the Eagles’ and Cowboys’ inactives, with analysis.

• LT Jordan Mailata: Mailata sprained his knee during practice on Thursday. It is not an injury that will keep him out for long, but he won’t be a go in one of the Eagles’ biggest games of the season.

Starting in place of Mailata will be Andre Dillard. Mailata and Dillard entered training camp as competitors for the starting LT job, but it became obviously and immediately apparent that Mailata was going to win that “competition,” as Mailata excelled, and Dillard struggled.

As we noted in our “five matchups to watch,” the Eagles’ biggest matchup advantage, by far, is their offensive line against Dallas’ severely depleted defensive line. That edge would be negated to some degree if Dillard has to start in favor of Mailata. The change would almost certainly force the Eagles to rethink protection strategies, as they would seek to give Dillard easier responsibilities and added help.

Brett Toth, who was a healthy scratch the first two weeks, will now likely be the swing tackle.

• S Rodney McLeod: Marcus Epps and K’Von Wallace have filled in at safety in McLeod’s absence.

• LB Davion Taylor: A calf injury caused Taylor to miss the bulk of training camp. He left the Niners game early with another calf injury, presumably related. Taylor played nine snaps in the regular defense on Sunday, and on the initial viewing he seemed to be active.

• QB Gardner Minshew: Minshew has not yet overtaken Joe Flacco as the No. 2 quarterback.

• OG Jack Anderson : This is the guy they signed off waivers from the Bills last week.

• DE Brandon Graham (IR): Graham’s season is over with a ruptured Achilles. On the field, Graham was arguably the Eagles’ best defensive player in 2020. Off the field, Graham has unlimited energy and positivity, and he is a player that you just want to have around if you’re a head coach in the NFL. His personality was no doubt very useful this offseason to a new and unestablished head coach like Nick Sirianni, and first-time defensive coordinator Jonathan Gannon. Sirianni called Graham the “heart and soul” of the team.

The Eagles still have some depth at defensive end, but it will be interesting to see how they use it. Throughout training camp, Graham and Ryan Kerrigan mainly played on one side (typically the left side) of the line, while Josh Sweat and Derek Barnett played on the right side. To be determined if Sweat and/or Barnett will get snaps on the left side, or if rookie DE/DT Milton Williams will take on a bigger role as a direct replacement for Graham. It will probably be a little of both.

• RG Brandon Brooks (IR): Brooks suffered a pectoral injury against the 49ers. It’s “only” a pec strain, as opposed to a tear, so while he’ll likely miss time (about 8 weeks, per Lane Johnson) on injured reserve, it’s not a season-ending injury. 2021 second-round pick Landon Dickerson filled in for Brooks at RG on Sunday. He did not play well.

• OL Jack Driscoll (IR): Driscoll is on short-term IR with a pectoral injury. He would be the first lineman off the bench if Lane Johnson were to go down, so it’s at least a noteworthy loss, but not a crushing one. As a rookie, Driscoll appeared in 11 games, starting four, playing a total of 300 snaps, and looking like a competent player.  However, he dealt with a handful of injuries, including an MCL sprain that ended his season.

• TE Tyree Jackson (IR): Jackson suffered a broken bone in his back during joint practices with the New England Patriots. The injury did not require surgery, and his recovery period at the time was deemed by the team to be 8-10 weeks. That was five weeks ago, so (checks math) Jackson should be back 3-5 weeks from now.

Rather than shut Jackson down for the season by placing him on season-ending IR prior to 53-man cutdowns, the Eagles chose to allow Jackson to occupy a roster spot on the initial roster, and as a result, they were able to place him on short-term IR, which will allow him to return at any point after Week 3.

• CB Josiah Scott (IR): Scott got hurt in the third preseason game against the Jets. He made the team, but will be shelved for at least three weeks. The Eagles have since signed a pair of corners in Andre Chachere and Mac McCain.

• DE Dorance Armstrong: Armstrong has played in 48 career games, starting 4. He has 64 career tackles and 2.5 sacks.

• DT Carlos Watkins: Watkins had 27 tackles and 2 sacks for the Texans in 2020. He signed with the Cowboys in free agency this offseason.

• OT Ty Nsekhe: Nsekhe is a versatile 35-year-old backup lineman who has bounced around from teams in the Arena Football League (including the Philadelphia Soul), the CFL, and with six teams in the NFL.

• S Donovan Wilson: Wilson was a playmaker for the Cowboys in 2020. 71 tackles, 2 INTs, 3 FFs, and 3.5 sacks. He started Week 1 against the Buccaneers, but left early with a groin injury. Jayron Kearse will start in his place.

• LB Keanu Neal: You may remember Neal from the Eagles’ divisional round playoff game against Atlanta, when he was a safety for the Falcons:

Neal has since converted to linebacker and was a free agent acquisition of the Cowboys this offseason. He has played well for the Cowboys the first two weeks, collecting 9 tackles. He’s out this week

• DE DeMarcus Lawrence (IR): Lawrence is by far the Cowboys’ best player on defense, but more importantly, he’s also really their only good starting defensive lineman. It’s a potentially devastating loss for a team that was already fielding one of the worst defensive lines in the NFL.

• RT La’el Collins (Suspended): Collins was suspended five games by the NFL for violating the league’s policy on substance abuse. Collins reportedly did not test positive for any banned substances. However, according to Jason La Canfora of CBS, he missed seven tests.

Terence Steele started in Collins’ place last Sunday against the Los Angeles Chargers. Steele is a second-year player who started 14 games for the Cowboys in 2020. The Eagles wrecked him in a win over the Cowboys in November in Philly last season.

• WR Michael Gallup (IR): Gallup injured his calf in the Cowboys’ loss to the Buccaneers Week 1, and he subsequently landed on injured reserve. In 2020, Gallup had 59 catches for 843 yards and 5 TDs. He is sort of the third guy in the Cowboys’ extremely talented WR trio, alongside Amari Cooper and CeeDee Lamb. In two games against the Eagles last season, Gallup had 13 catches for 182 yards and 2 TDs.

• CB Kelvin Joseph (IR): Joseph was the Cowboys’ second-round pick (44th overall) of the Cowboys in the 2021 NFL Draft. Joseph injured his groin during training camp, though according to various Cowboys training camp reports, he was not going to beat out Anthony Brown for a starting job anyway.

• DT Neville Gallimore (IR): Gallimore played in 14 games as a rookie in 2020, starting 9. He had 28 tackles and 0.5 sacks. Not exactly an impact player, but he was poised to start this season before he dislocated his elbow.

• DT Trysten Hill (PUP): Hill tore an ACL in Week 5 last season, and began this season on the PUP list. He was a second-round pick of the Cowboys in 2019. 16 career tackles, 0 sacks.