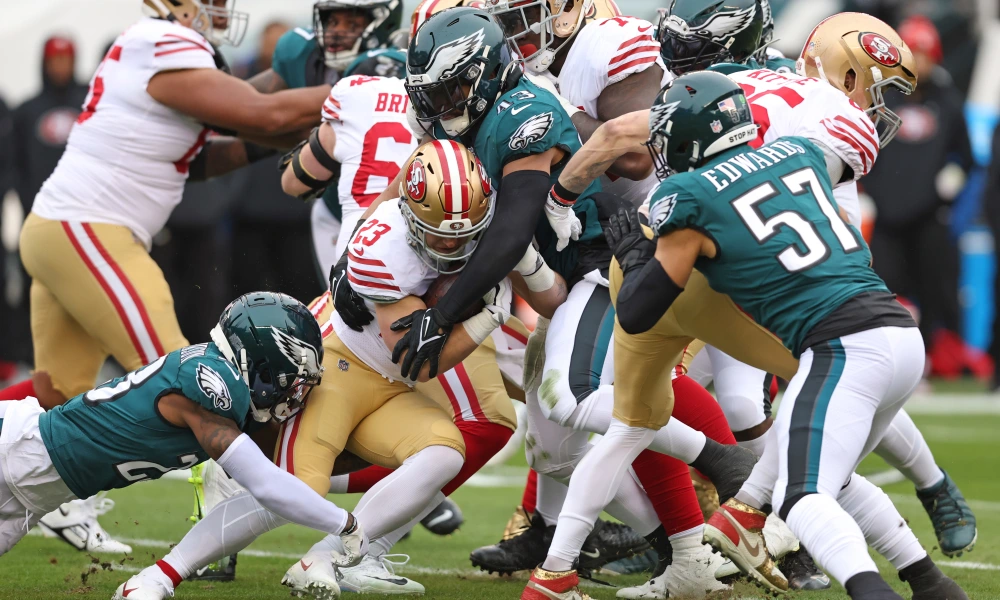 In the unlikely season for the San Francisco 49ers, this has to be one of the most unlikely stories in NFL history.

The San Francisco 49ers lost Brock Purdy early in the NFC Championship Game against the Philadelphia Eagles, leading to fourth-string quarterback Josh Johnson entering the contest. No matter, because Christian McCaffrey is still a beast.

That worked for at least one drive in the second quarter, as McCaffrey punched in a 23-yard touchdown to tie the Eagles at 7-7 with 8:29 left in the first half.

On a six-play drive, McCaffrey had four touches, with the last being the most impressive. McCaffrey broke multiple tackles and bounced off defenders, keeping his balance before finding open field for the long scoring run.

McCaffrey now has seven carries for 55 yards with a TD. He also has a pair of catches for 18 yards.

Purdy has been shown on the sideline with a wrap on his right elbow. While he’s done some short passing on the sideline, Purdy has not come back into the game since suffering the elbow injury on his fumble in the first quarter.

“It kind of reminds me of last year how I could go from receiver to running back to receiver,” Samuel told Irvin. “Some of the balls that you see him catch, the ball is already gone before he even makes a break.

“With you two on the field, it’s a deadly combination,” Irvin, the Pro Football Hall of Famer, replied back to Samuel.

RELATED: How 49ers’ past playoff losses motivates Deebo vs. Eagles

Considering how effective the combination of Samuel and McCaffrey has been, it stands to reason that Shanahan will continue using both players as dual threats.