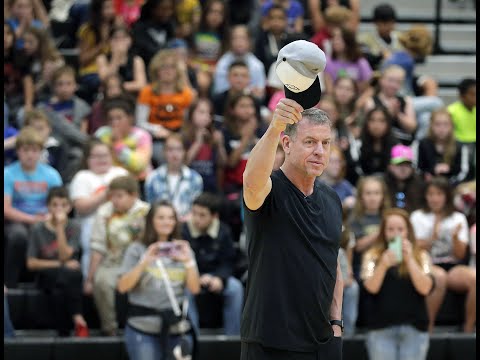 Sometimes, everything can be solved with a simple text and a little bit of communication. Former Dallas Cowboys quarterback Troy Aikman learned that lesson while putting together a fundraiser for his hometown of Henryetta, Oklahoma. Set to take place on June 11 in the small Oklahoma town, Aikman’s country music marathon will feature a number local acts and other activities as the community comes together to raise money for those in need. The planning process was coming together fairly seamlessly when Aikman hit a roadblock. “Troy Aikman’s Highway to Henryetta” needed a headliner, but the NFL commentator wasn’t exactly sure where to turn. Then, it hit him. Why not text your friend, Blake Shelton?

“I said, ‘Hey, Blake, I’m going to host a music festival in my hometown Henryetta on June 11,’” Aikman told the Dallas Morning News.

“’It’ll be first class in every way … I wanted to see if we can talk with your folks about you headlining it. We want an Oklahoma presence, and you’re my first choice. I know these asks can be a pain in the a–, and I don’t want it to be for you, so if you want to put me in contact with your manager that’s cool, too. Appreciate you.’”

Great minds tend to think alike and this case was no different. Aikman says Shelton immediately replied back and said that he was hoping to do a charity concert as well. Needless to say, Shelton was on board and willing to perform.

“He responded almost immediately. ‘Hey there, boss. Good to hear from you. That’s a great idea. I’ve been kicking around doing one myself somewhere around Texhoma the last three years, but I’ve been too lazy to put it together… I’m glad that you’re doing something here in Oklahoma,'” Aikman explained.

“Blake gave me his manager’s number, so we were off and running.”

Aikman’s festival is still months away, but with a headliner like Blake Shelton, it’s safe to say that there will be more than enough people in attendance.