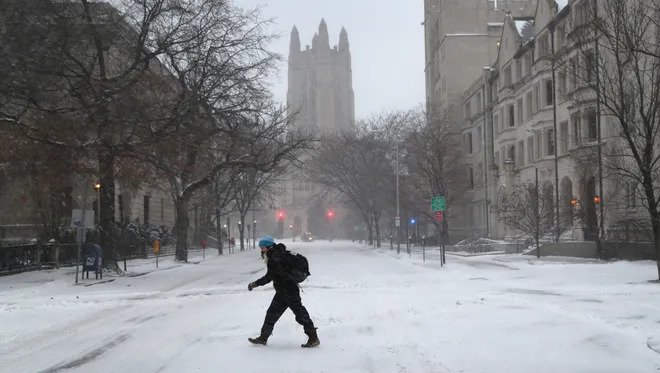 Abitter bomb cyclone from the Arctic is scheduled to hit from Dallas to Minneapolis this weekend, potentially causing widespread disruption and hazards in the Eastern United States.

An Arctic air mass is currently over central U.S. and it will expand eastward into the Midwest and Deep South on Saturday, before moving to the East Coast on Sunday, the National Weather Service (NWS) said on its website.

From the Eastern Great Lakes through the Northeast, heavy snow is expected as the cold front engulfs the region, said the NWS.

Thunderstorms that could cause damaging wind, isolated hail, and a few tornadoes may occur across parts of the Southeast to the Mid-Atlantic Friday night into Saturday, it added.

Swathes of the Tennessee and Ohio Valleys will be impacted by “a significant winter storm” emerging late on Friday and going through to Saturday, the NWS said.

Heavy rainfall and severe thunderstorms are expected to impact the Southeast and Mid-Atlantic over the weekend.

Light snow is expected to fall in the area from the Southern Plains to Wisconsin, before the Arctic airmass goes over the Great Plains and Mississippi Valley late on Friday into Saturday, causing sub-zero temperatures.

“Snow rates of greater than 1 inch per hour combined with gusty winds will produce blowing and drifting snow. This will severely reduce visibility and make for difficult to hazardous driving conditions,” the NWS said on its website.

It said that parts of the Northeast will receive the greatest snowfall, with accumulations of over 12 inches are likely. The NWS warned that heavy snow might cause power outages.

The cold front will spread across the Southeast and Mid-Atlantic on Saturday night through to Sunday. Temperatures are likely to be below freezing along the Gulf Coast and in Northern Florida on Sunday morning.

“Currently, the cold air that is expected to impact the Southeast states is diving southward across the Canadian Plains and into the U.S. Plains. Part of this cold air is helping to fuel the snow we are expected from Colorado and New Mexico through the Great Lakes currently,” AccuWeather senior meteorologist Rob Miller said on the organization’s website.

AccuWeather forecasted that record low temperatures are set to rush into the Southeast as a result of the cold front. The website said that temperatures in Minneapolis will be 25F below normal levels on Friday, as the Arctic cold air mass travels over the northern plains.

Earlier this week, cold air flowed through the West coast of the United States, breaking low records in Washington and Oklahoma states.

Iowa saw a tornado on March 5, which reaped havoc and caused air traffic in the region to halt.