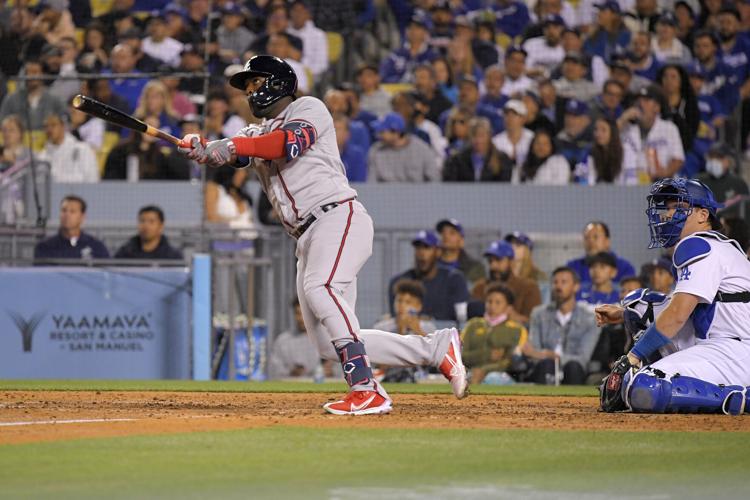 LOS ANGELES (AP) — Freddie Freeman arrived at Dodger Stadium and headed to the visiting clubhouse for an emotional reunion with his former Atlanta Braves teammates. Once the game began, he reminded them of what they’re missing by slugging his first home run for his new team.

Kenley Jansen showed up and promptly got lost trying to find his way to the Braves’ side after 12 years as the Dodgers’ closer.

“It was weird, man,” Jansen said, his black glove and black hat with a white ‘A’ sitting on a table next to him.

Two players who had spent their entire careers with one team found themselves on opposite sides Monday night in the opener of a three-game series between the defending World Series champion Braves and the Los Angeles Dodgers — a rematch of the last two NL Championship Series.

Freeman joined the Dodgers in March on a $162 million, six-year deal that returned him to Southern California, where he grew up in Orange County.

Jansen left the Dodgers the same month for a $16 million, one-year deal to be the Braves’ closer.

“It’s like you’re leaving your parents for college,” Jansen said.

Freeman dropped in Braves manager Brian Snitker’s office for a chat and made his way around the clubhouse sharing memories of last year’s World Series victory, the franchise’s first since 1995. He hadn’t seen any of his old mates since the team’s victory parade through the streets of Atlanta in November.

Freeman said his former teammates told him he looked skinny.

“We’ve got about 25 hugs and about four tear sheds so far,” he said, totaling up the reactions.
Freeman told a Braves employee wearing a World Series ring he didn’t want to look at it.

“The first time I want to see it is going on my finger,” he said.

That happens June 24-26 when the Dodgers visit Atlanta for the first time this season.

It was assumed Atlanta would try to lock up Freeman, a free agent for the first time who had never played for another club. But a deal didn’t get done before the labor lockout began in early December and then the Braves traded for All-Star first baseman Matt Olson from Oakland and signed him to a $168 million, eight-year contract, signaling the end of Freeman’s tenure in Atlanta.

Freeman said he and Anthopoulos talked for three hours via FaceTime after the deal went down.

“That was the closure I needed,” the slugger said. “Now it’s just happiness and seeing him and friendship.”

“That’s the only thing I know, being a Dodger,” he said. “We did everything to try to come back here but it didn’t work out.”

The bonhomie figured to continue during the game when Braves runners arrived at first base to find Freeman.

“I’m sure Guillermo (Heredia) will say some things because he’s one of my favorite teammates of all-time,” Freeman said.

Both Freeman and Jansen have been warmly welcomed by their new team’s fans. In the Dodgers’ home opener last week, fans chanted “Freddie! Freddie!” after a double.

“They’re chanting every time I go up to bat,” Freeman said, laughing, “and I have to do something special every time.”

He did in the first inning Monday, blasting his first home run with the Dodgers to the left-field pavilion off Huascar Ynoa. Fans launched into chants and Freeman’s family celebrated by jumping in their suite. He pumped his right arm as he crossed the plate, giving the Dodgers a 1-0 lead.

Freeman received his Silver Slugger award before the game. His wife and three children joined him on the field, along with Snitker and hitting coach Kevin Seitzer, who appeared at Freeman’s request.

The Dodgers followed that by honoring Jansen with a highlight video. Fans greeted the franchise’s career saves leader with a standing ovation as his old “California Love” music blared from the speakers. He hugged Roberts, third baseman Justin Turner and Andrew Friedman, president of baseball operations.

Freeman understood the conflicting emotions enveloping him and Jansen and their old teammates, saying, “I love every single person on that side of the field.”

“I had a great 12 years. I’m not trying to close anything,” he said. “We’re all going to be 50, 60 years old not playing baseball anymore and we’ll still be friends.”