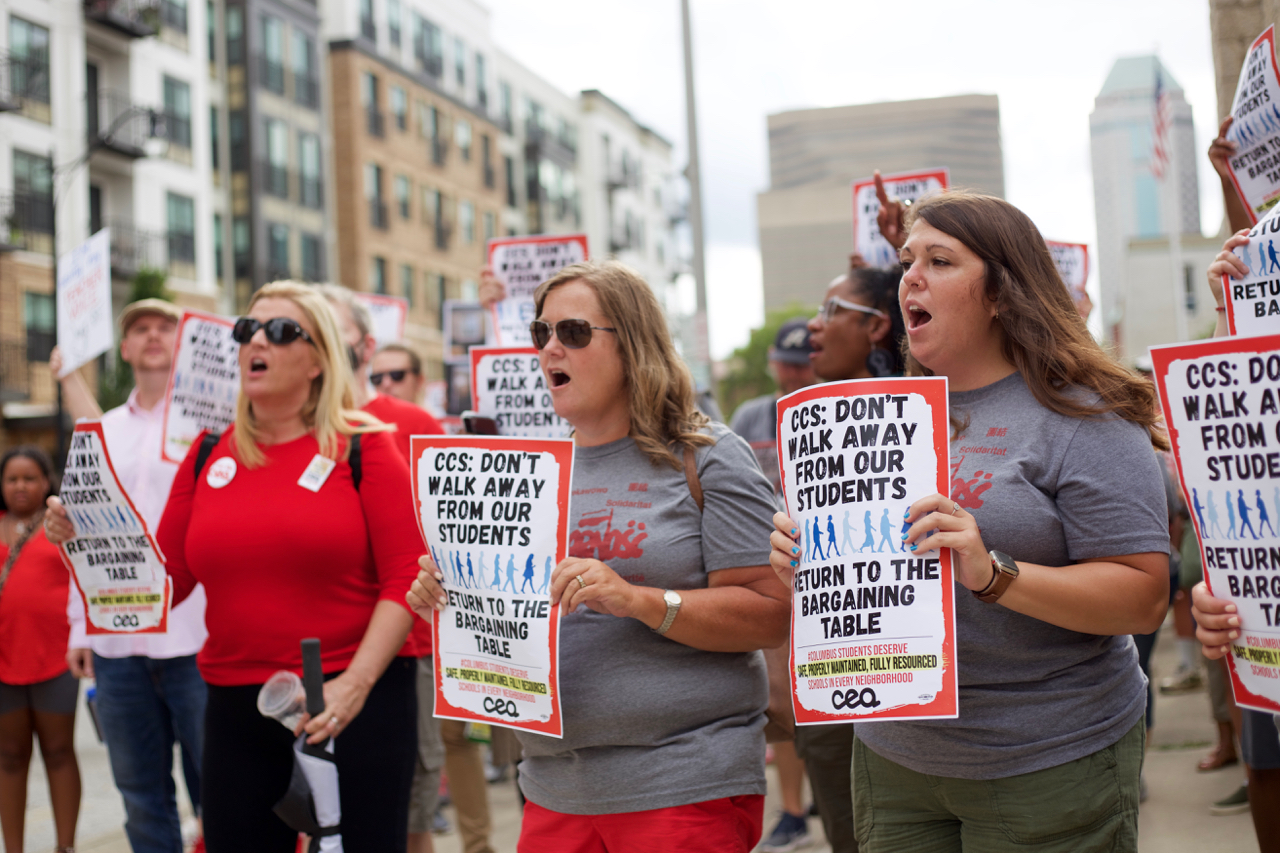 The Columbus Education Association has announced that more than 94% of members have voted to reject the Columbus City school board’s last final offer and go on strike for the first time since 1975.

The official confirmation came after CEA members could be seen leaving the meeting at the Greater Columbus Convention Center carrying picket signs available inside that say “On Strike” or contain similar language.

The nearly 4,500-member union — which represents teachers, librarians, nurses, counselors, psychologists and other education professionals — met for more than three hours at the convention center to vote.

The Columbus Education Association members are inside the Greater Columbus Convention Center to vote on whether to initiate a strike against Columbus City Schools.

The doors shut shortly after 7 p.m. with the nearly 4,500-member union, which represents teachers, librarians, nurses, counselors, psychologists and other education professionals, inside.

The vote would take several hours, the CEA says, and the outcome likely won’t be known until early Monday morning.

If a strike is approved, union members would begin picketing later Monday morning outside the schools where they would normally report for work for teacher preparation days.

The Columbus City Schools Board of Education requested two negotiation sessions last week, but both sessions between the board and the union with federal mediator ended with no agreement.

Thursday’s session, the 22nd negotiating session, lasted 12 hours and the board gave another final offer that would hire 25 additional the full-time school nurses, behavioral specialists, school psychologists, and speech language pathologists in fiscal years 2024 and 2025; give teachers an additional planning day in 2024 and 2025; and would commit to having CEA “at the table to address equity-based staffing.”

Earlier in negotiations, CEA was asking for an 8% increase at each step of the salary scale for 2022-23, 2023-24 and 2024-25, according to a copy of the unfair labor practice charge the school board filed against the union on Aug. 3 and obtained by The Dispatch.

What’s the disconnect in contract talks between Columbus City Schools and teachers union?

The board reported that its “final offer” at the time of the complaint was a 3% increase at each step of the salary for 2022-23 and a $2,000 retention bonus to be paid out over the next two years, according to the complaint

“By the end of this three-year contract, a teacher who last school year was paid the district’s average salary of $74,000 will be earning more than $91,000 – a 23% increase from the start of the contract,” said Board President Jennifer Adair.

Starting teachers would also earn more than $50,000 in the first year of the contract, according to the district.

The final offer also would give teachers a day dedicated to planning, with students not in schools, for each of the 2023-24 and 2024-25 school years, according to the district.

In addition to functioning heating ventilation and air conditioning (HVAC) systems in schools, the CEA previously was asking for smaller class sizes; full-time art, music and physical education teachers; more planning time for teachers; a cap on the number of class periods in the day; and “other working conditions that recruit and retain the best educators for out students.”

Earlier this month, CEA filed its required formal notice to the State Employment Relations Board of its intention to strike and picket if a new contract is not reached.

The district has responded to the issue about HVAC systems by saying it is updating the HVAC systems in 13 school buildings this summer using $35.6 million in federal Elementary and Secondary School Emergency Relief Funds created due to the COVID-19 pandemic.

While work to update the HVAC systems will be completed at seven of those buildings in time for the scheduled start of classes, work at six other buildings won’t be completed until September.

In addition, two other buildings — Columbus Alternative High School and Hubbard Elementary School — will have to wait until the start of the 2023-2024 school year to get building-wide air conditioning.

If the union membership votes to strike and remains on the picket line Wednesday, the state’s largest district with nearly 47,000 students plans to start the school year remotely — a move which has drawn criticism from some Columbus City Schools parents concerned that many students did not do well working remotely during the COVID-19 pandemic shutdown.

The district said it will move to “synchronous and asynchronous remote learning” and the district’s buildings will be closed to students and community members, according to information on a district webpage. However, 25 school sites will offer free lunch and breakfast meals to students in grab-and-go containers.

“The District Administration will send parents and students correspondence regarding the procedures to begin the remote learning program before the first day of school,” according to the district.

Students would be required to attend school through remote learning if there is a strike on the first scheduled day of classes.

The last time Columbus City Schools went on strike was 1975.

Teacher strikes are a tool that is used as a last resort, said Ohio Federation of Teachers President Melissa Cropper.

“A strike allows us to bring together the collective voices to say that these issues are highly critical to us and to our students and to the community that we live in, and we are willing to take these steps to make sure that the issues that we bring up are being addressed,” she said.

COVID-19 has given people a different expectation of what teaching and learning conditions can look like, she said.

“If I can learn in my air conditioned house in front of my computer instead of going to an overcrowded classroom that doesn’t have proper ventilation or heating or cooling, how can you tell me you value education and send me to a place like that?” Cropper said.

Gahanna-Jefferson Schools went on strike for four days in 2020, the most-recent district in Greater Columbus to strike.

The contract that ended the strike gave the teachers a 2.25% base pay raise, and the controversial classroom cameras cited as one reason for the work stoppage were still used, though less frequently than first discussed.

The REA balked at the terms of the contract, rejecting merit-based compensation and asking for firm caps on class sizes and more planning time. The union also filed an unfair labor practices complaint against the district, claiming details of the proposed contract should not have been published online.