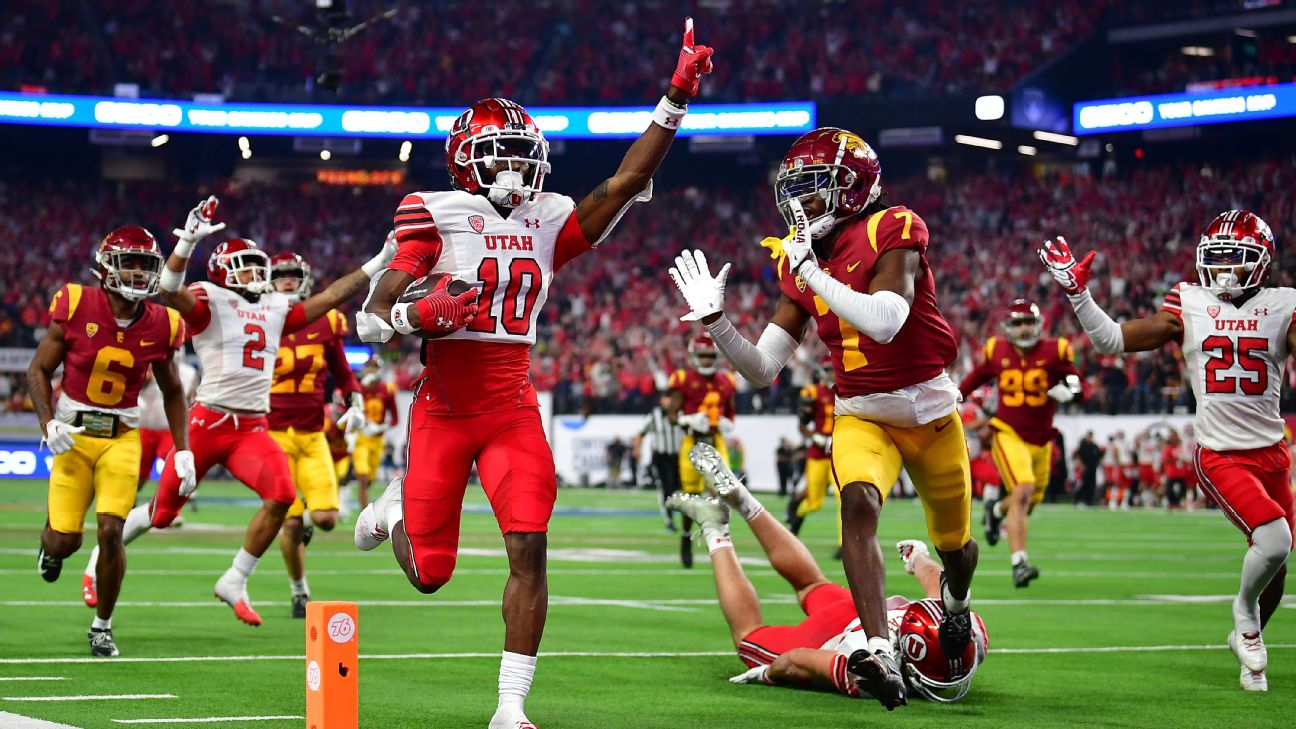 No. 11 Utah played the role of spoiler Friday night in a dominant 47-24 win over No. 4 USC in the 2022 Pac-12 Championship Game. The evisceration of the Trojans, which saw the Utes take advantage of multiple injuries to USC quarterback Caleb Williams, not only sends Utah into the Rose Bowl for the second straight season but also likely knocks USC out of the College Football Playoff.

While that will not be determined for sure until Sunday, the two-loss Trojans are highly unlikely to see the four-team field with two losses to the Utes this season. Expected to replace USC is No. 5 Ohio State, which has only suffered a loss to No. 2 Michigan.

USC jumped out to a 17-3 first-half lead behind some incredible plays from Williams. However, the Heisman Trophy favorite was slowed under the weight of two injuries, including a hamstring injury that opened a door for Utah to rally from a 14-point deficit before halftime and outscore USC 30-7 in the second half.

When the Utes knocked off the Trojans 43-42 on Oct. 15, tight end Dalton Kincaid was one of Utah’s heroes. With Kincaid slowed Friday night by a lower-back injury, however, a variety of characters emerged as threats in the passing game for quarterback Cam Rising. After scoring five touchdowns against the Trojans in the first meeting, Rising turned in another huge performance on Saturday, which included touchdown passes of 57 yards to Money Parks and 60 yards to Thomas Yassmin in the second half. Neither player was among the Utes’ top targets in the regular season, but both came up with huge plays amid a reduced role for Kincaid. With 5:29 remaining, Ja’Quinden Jackson sealed the outcome with a 53-yard touchdown run.

Otherwise, the story was Williams. The sophomore star threw two touchdowns and had an incredible 59-yard run in the first quarter alone. He looked essentially unstoppable. However, an injury to the pinky on his throwing hand and the hamstring injury limited his mobility and accuracy for the remainder of the game. As he slowed down, so did the Trojans.

Williams ‘not even 50 percent’

When Williams scrambled for a 59-yard gain in the first quarter to set up a touchdown that put USC ahead 14-3, he looked like the dynamic playmaker who’d wowed the country for much of the season. For most of the rest of the game, though, he looked like a different player. As it turned out, that dazzling run resulted in a hamstring injury, according to coach Lincoln Riley.

One of the first obvious signs that something may have changed for Williams came late in the second quarter when he was sacked on a second-and-1 Normally elusive, Williams was unable to escape the grasp of Utah defensive end Gabe Reid. A similar scene played out numerous times during the rest of the game. Utah finished with seven sacks on Williams, who walked and jogged with a noticeable limp at times.

“He was not even 50 percent,” said Riley after the game. “I thought about taking him out but he wouldn’t let me … maybe the gutsiest performance I’ve ever seen.”

Though he should remain a frontrunner for the Heisman Trophy, the rough night for Williams may add some drama to the vote. Other potential candidates such as Michigan running back Blake Corum and Tennessee quarterback Hendon Hooker also dealt with late-season injuries that took momentum from their campaigns for the award. If nothing else, the game showed how important Williams is to USC. Once he was less than 100%, the holes in the Trojans’ pass protection became more evident, as did their inability to run the football.

A 29-26 Week 1 loss at Florida changed the outside perception around the Utes. Though it entered the season regarded as a potential CFP team, Utah faced an uphill climb after just one game. When star tight end Brant Kuithe was lost early in the season due to injury, coupled with the Utes falling to 4-2 with a loss at UCLA on Oct. 8, it seemed as though a disappointing year was on the horizon. However, as it has become the norm for the program under 18th-year Kyle Whittingham, Utah persevered.

While the UCLA defeat essentially eliminated Utah from CFP contention, the Utes beat USC for the first time the following week and stayed locked in on returning to the Pac-12 title game. The program has been to the league championship game in four of the past five seasons and now has back-to-back titles. After suffering a second Pac-12 loss to Oregon in November, It actually took a convoluted tiebreaker for Utah to get into the Pac-12 Championship Game over Washington and the Ducks. No matter how they ended up in the game, the Utes left carrying the trophy.

While the injuries to Williams will rightfully gain a lot of attention from Friday’s result, the lackluster play of USC’s defense was arguably more significant in determining the outcome. Utah converted 5 of 11 third downs and busted three plays of 50 yards or more. One prominent example of USC’s poor tackling came with Utah facing a third-and-19 from its own 43-yard line early in the third quarter. The game was tied at 17 and it appeared the Trojans were about to force a three-and-out when Rising hit Parks for a go-ahead touchdown.

Numerous defenders had a chance to tackle Parks, but he accelerated through the defense and gave Utah its first lead. The Utes finished with 533 yards and were effective on the ground and through the air. The Trojans have feasted on turnovers all year (they finish +21 in turnover margin) but they’re going to be a national title contender in Year 2 under Riley, they will need to make significant defensive improvement.

In the moment, Ohio State’s 45-23 loss to Michigan last week seemed like a fatal blow to the Buckeyes’ CFP aspirations as it knocked them out of the Big Ten Championship Game and out of the top four in the CFP Rankings. As it turns out, Ohio State may still have a chance to compete for a national championship. Unless the CFP Selection Committee decides to admit a two-loss team for the first time in its nine-year history, Ohio State will be an obvious choice to include in the field. At 11-1, the Buckeyes could reach the playoff for the second time as a non-division champion. They also made it with an 11-1 record in 2016 when Penn State won the Big Ten East, though they lost 31-0 to Clemson in a semifinal.