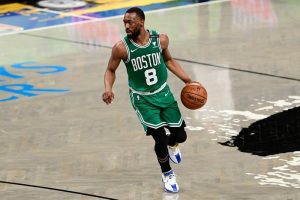 The OKC Thunder  have agreed to a buyout with their recently acquired point guard, Kemba Walker according to ESPN’s Adrian Wojnarowski.. The Thunder and Walker continue to hammer out the details of the buyout, but in the meantime, the NBA veteran already has a new home.

As the Oklahoma City Thunder head into another season that will prioritize player development, Kemba Walker did not really fit into that plan. Not only due to his age, but due to his skillset.

A ball-dominant guard eating minutes in Bricktown would have been the worst-case scenario. Taking away minutes from Josh Giddey, Tre Mann, Ty Jerome, Theo Maledon, and even causing a weird fit next to Shai Gilgeous-Alexander.

It was in each side’s best interest to end this experiment before it started. Kemba Walker was traded to OKC along with a first-round pick (16th overall in the 2021 NBA Draft, which was later traded for two future firsts) for Al Horford and Moses Brown (Since traded to the Dallas Mavericks).

At the start of the offense, it looked promising that the OKC Thunder would be able to ship off Walker in a trade. However, as the NBA Free Agency market developed the landing spots dried up.

The Thunder, who rarely buyout players, saw that it was in their best interest to cut bait with the Uconn product.

Oklahoma City has a clean cap sheet and the financial flexibility to negotiate a buy-out with Walker.

This is also a great favor to the point guard and his agent, so it is safe to assume the duo will be giving up a sum of money.

Kemba Walker is added to a long list of players that Sam Presti has helped get a player to the place they wish to go.

The hope being of course, that in the future an agent or player will remember these moments, and return the favor of sorts to the OKC Thunder organization.

Kemba Walker is headed to the New York Knicks, the Bronx native gets the homecoming he wanted while the Thunder gets the minutes to distribute to the young players that they wanted.

While it is normal for the fans to worry about the dead cap and cap space, the Thunder are in such a unique position to be able to handle it without making a dent in the future.. This is something Presti has worked around before. He is still paying Kyle Singler nearly a million dollars this year.