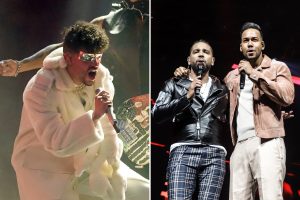 It seems Aventura and Bad Bunny are here to help everyone fight the Monday blues with the announcement of an unexpected collaboration. Bad Bunny took to Instagram to share that he and the Bachata group would be dropping what seems to be a new song at midnight on Tuesday, August 3.

“Hoy a las 12 de la media noche se bebeee,” wrote Bad Bunny in the caption, including flags of the Dominican Republic and Puerto Rico. The carousel post featured both their logos, snapshots of an apparent music video, and a promo image together. Aventura also tweeted the announcement, writing in Spanish, “To close out the Aventura chapter in a memorable manner.”

This collaboration news comes as Aventura gears up for their highly anticipated final tour as a group, beginning with a show on Saturday, August 14, at the Hard Rock Stadium in Miami, Florida. Performances will continue until October, including appearances from the major cities of Chicago and Los Angeles to the states of New Jersey and Texas.

While it hasn’t officially been announced, it wouldn’t be a surprise to see Bad Bunny make an appearance on the tour following the release of this collaboration. Aventura’s tweets also included the hashtag of their tour name #GiraInmortal. Luckily, fans won’t have to wait long to everything that this collaboration entails.