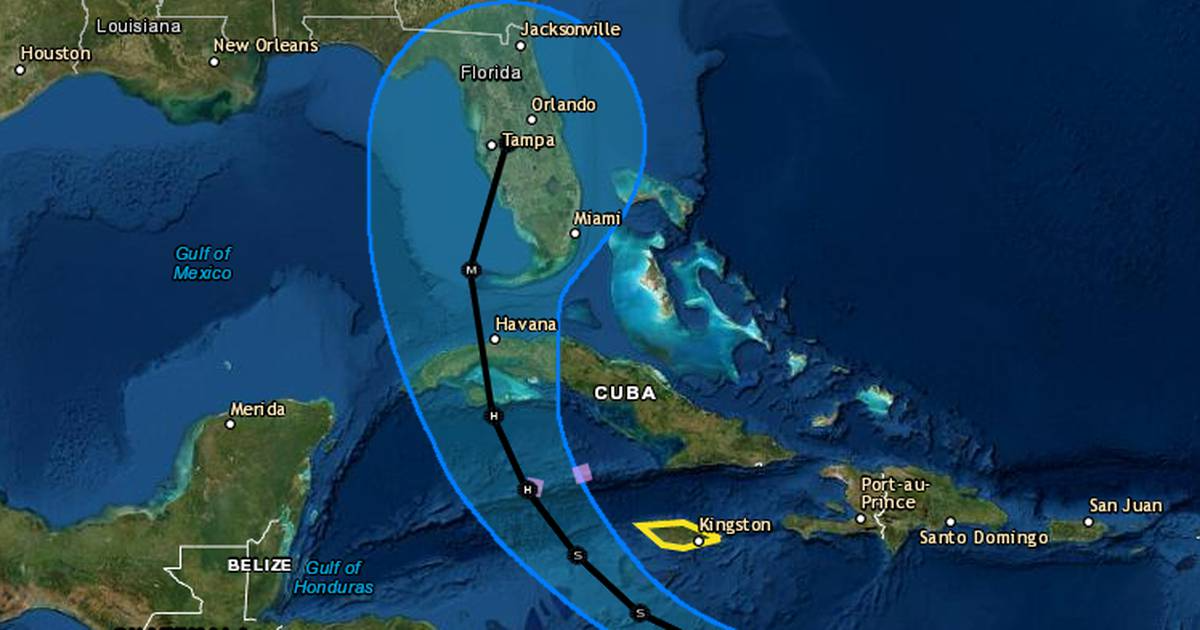 Tropical Storm Ian grew overnight in the Caribbean still with a path that could bring it to Florida next week as a major Category 3 hurricane prompting Gov. Ron DeSantis to declare a state of emergency in 24 counties.

“Early next week, Ian is forecast to move near or over western Cuba as a strengthening hurricane and then approach the Florida peninsula at or near major hurricane strength, with the potential for significant impacts from storm surge, hurricane-force winds, and heavy rainfall,” the NHC said in its discussion of the storm. “While it is too soon to determine the exact magnitude and location of these impacts, residents in Cuba, the Florida Keys, and the Florida peninsula should ensure they have their hurricane plan in place and closely monitor forecast updates through the weekend.”

The NHC said the Florida Keys and South Florida could see heavy rain as early as Monday with limited flash and urban flooding possible.

Though most of the state of Florida is within Tropical Storm Ian’s “cone of uncertainty,” the NHC cautioned that computer models are diverging on where the storm goes in the Gulf of Mexico after leaving Cuba.

Regardless of its exact path, Ian will start impacting Florida next week.

“Florida Keys and South Florida: Heavy rains begin as early as Monday,” the NHC said. “Limited flash and urban flooding is possible with this rainfall.”

The storm, forecast to grow its winds to 115 mph, prompted DeSantis’ emergency declaration.

“This storm has the potential to strengthen into a major hurricane and we encourage all Floridians to make their preparations,” he said. “We are coordinating with all state and local government partners to track potential impacts of this storm.”

Not in the order are Orange, Lake, Seminole or Volusia.

The latest cone of uncertainty still has the system approaching Florida late Tuesday and making landfall Wednesday, but the consensus center path as of Saturday has moved slightly up the southwest coast closer to Tampa since Friday’s advisories.

“I’m a Floridian. so I’m going to speak to you candidly. Don’t panic,” said NHC acting director Jamie Rhome said earlier Friday. “It is important that you take this threat seriously and begin to execute your hurricane plans in a calm and orderly fashion while there’s still time to get ready.”

There will be a slow intensification over the weekend with Ian expected to grow into hurricane strength by Monday morning with its center south of Cuba near the Cayman Islands and Jamaica.

“We are watching the path, still not quite clear-cut, but it is aiming in the general direction of Florida sometime next week,” said Spectrum News 13 meteorologist Bryan Karrick. “So I’d spend the weekend getting your hurricane preps ready to go, maybe top off the gas tank, and get your generator ready, some bottled water and canned goods as well as we watch the system next week.”

The five-day path has it hooking north by Tuesday over Cuba and then parked off Florida’s southwest coast as a Category 3 hurricane with 115 mph winds and gusts of 140 mph by Wednesday evening.

A hurricane watch is in effect for the Cayman Islands with a tropical storm watch in place for Jamaica.

Elsewhere in the tropics, Hurricane Fiona became Post Tropical-Cyclone Fiona as it headed toward Canada. At 5 a.m., it was located 16 miles northeast of Halifax, Nova Scotia with maximum sustained winds of 90 mph. It was moving north at a 26 mph.

Tropical Storm Gaston has approached the Azores islands in the Atlantic and Tropical Storm Hermine continues to churn off the coast of Africa. Finally, the NHC is monitoring a disturbance several hundred miles west-southwest of the Cabo Verde Islands.

Since Sept. 1, the tropics have begun to play catchup churning out six named storms in three weeks after nearly two months of quiet.

The National Oceanic and Atmospheric Administration in early August updated its season prediction that 2022 would still be above-average with 14 to 21 named storms, although not a single named storm formed in the month of August.

The 2020 hurricane season set a record with 30 named systems, while 2021′s season was the third most active with 21 named systems. An average year calls for 14 named storms.