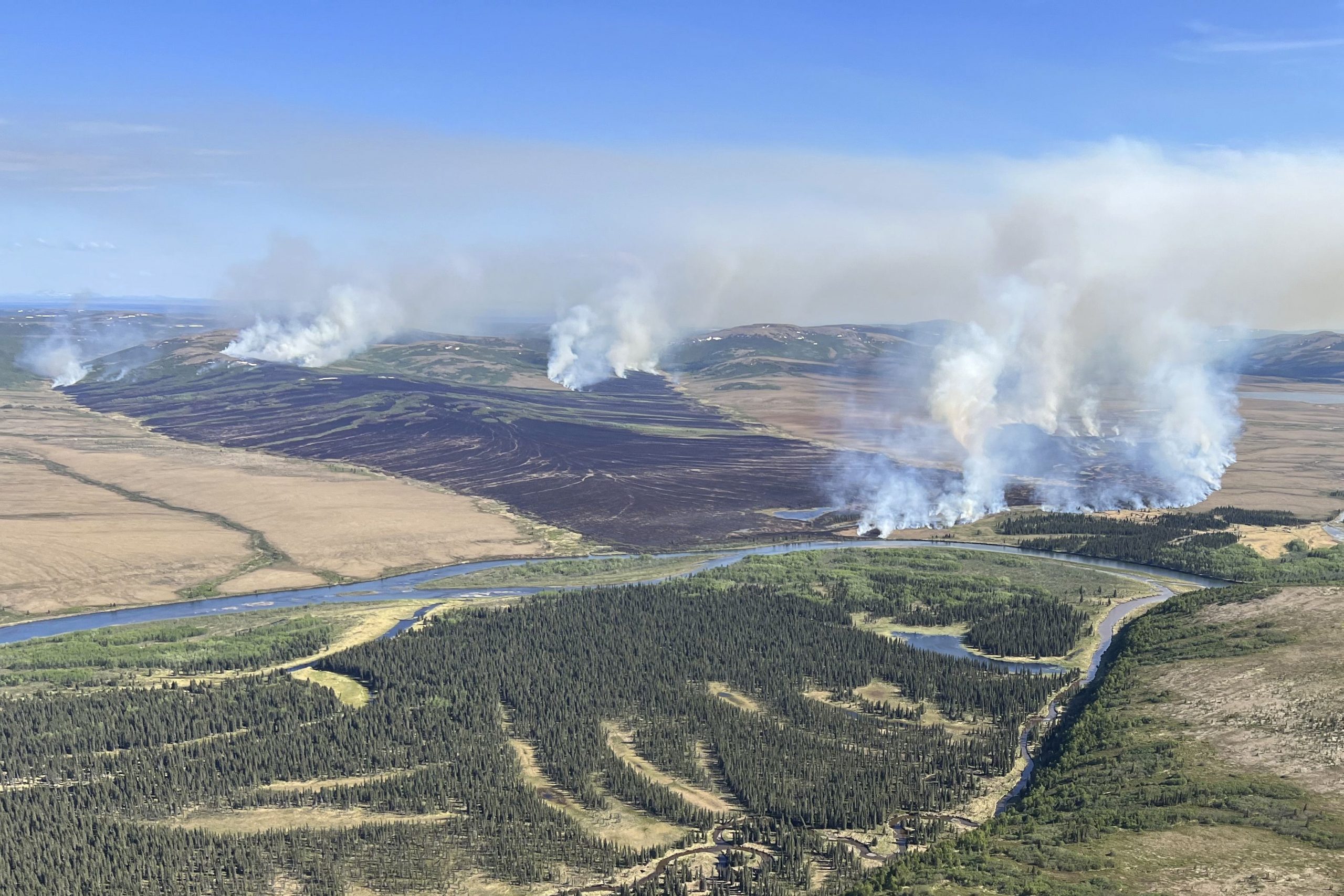 A large wildfire burning on the tundra continued to move toward a Southwest Alaska village Sunday, though fire managers said its pace had slowed and mandatory evacuations have not been ordered.

The East Fork fire, which was started by lightning May 31, covered another mile and was within 3.5 miles of the community of St. Mary’s, according to a Sunday update from the Bureau of Land Management Alaska Fire Service. The fire moved closer to the village by about a mile-and-a-half since Saturday.

Fire managers said the progress has slowed somewhat because of favorable weather conditions. The temperatures were slightly cooler with rising humidity, which could help moderate fire conditions. However, winds are expected to remain steady out of the north, helping move the fire toward populated areas.

The fire is burning in dry grass and shrubs like alder and willow in the mostly treeless tundra in southwest Alaska. The fire was started by lightning May 31.

Firefighters are working to strengthen primary and secondary fire lines protecting St. Mary’s and the nearby communities of Pitkas Point and Mountain Village and properties, including cabins, between them. No structures have been lost in the fire.

The fire is also 10 miles from another community, Pilot Station. Firefighters were expected to evaluate options of opening a preexisting fire line around that community.

Another fire northwest of the East Fork fire is growing, but it still about 25 miles north of Mountain Village.

As of Sunday, there were 204 personnel working the fire Additional personnel are expected to arrive Monday, when even more favorable weather conditions are also expected, including increased cloud cover, higher humidity and cooler temperatures. Officials also said the front may switch the wind direction to the southwest, which would help push the fire away from villages.

There were no mandatory evacuation orders, but about 700 residents of St. Mary’s and the nearby community of Pitkas Point were told to prepare in case they needed to leave.

There have been voluntary evacuations by residents, as well as others living in the nearby communities of Mountain Village and Pilot Station.

About 80 people had chosen to leave by Saturday, according to Emery Johnson, lead public information officer for the Alaska Incident Management Team that took over firefighting operations on Saturday.

On Sunday, 145 residents were sheltered temporarily in Bethel.

People receiving shelter assistance were largely elderly, youth and medically vulnerable people from the St. Marys, Pitkas Point and Mountain Village communities, according to the American Red Cross of Alaska, which has been assisting with shelter operations in Bethel.

“Most are going to different villages where they have family members,” Johnson said.

On Sunday, firefighters were working on a containment line that protects Mountain Village, Pitka’s Point and Saint Mary’s, along the connecting road between the two villages, according to the Sunday update.

“The intent for those lines is that if the fire continues to progress towards St. Mary’s, then we would be able to burn off that line and blunt the progression of the fire toward the villages,” Incident Commander Peter Butteri said in a video update.

St. Mary’s sits on the bank of the river. Firefighters were also working to protect structures on the east side of the weir, as well as fortifying a fire line a half mile outside St. Mary’s. Aircraft have also been dropping retardant along that line.

Boats have been used to shuttle firefighters to protect structures upriver of St. Mary’s. Crews also have also been working to protect Alaska Native properties.

Fire managers are in discussions with the U.S. Department of Homeland Security and Alaska Department of Public Safety, the agencies that would make any evacuation decisions in concert with village officials, Johnson said.

The different entities are talking about “if we need to do a mass evacuation, how would we do that?” she said.

Generally, fire officials could start telling residents to have bags packed for possible evacuation if the fire came within a mile of the village, Johnson said. Crews would also start preparing a burn to protect buildings by eliminating fuel for the fire.

Managers wouldn’t order an evacuation until the fire got closer than a mile away and crews lit that burn, she said.

Hot, dry conditions continued through Sunday, but temperatures were forecasted to cool slightly and humidity was expected to rise. A low pressure system moving in from the west could bring favorable conditions and a chance of showers by Monday or Tuesday. It could also bring a wind switch that would help push the fire away from the villages, officials said in the statement.

St. Mary’s and Pitkas Point, which is situated to the south at the confluence of the Andreafsky and Yukon rivers, are located about 450 miles west of Anchorage.

With about 45 active fires in Southwest Alaska, smoke was moving into South Central and Interior Alaska Sunday morning, according to the Division of Forestry.

The overall weather in Alaska this weekend has been cooling in the west and warming to the east. With wind directions changing, fire concerns could shift to easter Alaska next week.

This story was reported by Mark Thiessen of the Associated Press and ADN reporters Zaz Hollander and Alena Naiden.