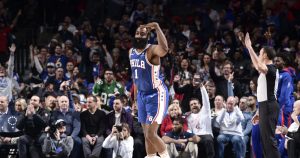 Embiid’s Sixers prevailed in a chaotic, offense-centric affair over Simmons’ Nets, extending their winning streak to six games and improving to 31-16 with a 137-133 victory.

Embiid, who’d been listed as questionable leading into the game with left foot soreness, posted 26 points on 6-for-18 shooting and 10 rebounds. He appeared to struggle physically on multiple occasions.

Brooklyn star Kevin Durant is out with a right knee MCL sprain. Furkan Korkmaz (right shoulder soreness) and Jaden Springer (non-COVID illness) were sidelined for the Sixers, who have now won 19 of their last 23 games.

The Sixers will play the Nuggets in Philadelphia on Saturday. Here are observations on their victory over Brooklyn:

Embiid, Simmons in middle of foul-filled start
The crowd let loose a legitimate roar when it saw Simmons switched onto Embiid about a minute into the game. Embiid missed a leaner and subsequent tip-in try, but P.J. Tucker scrapped for an offensive rebound and was fouled.

The Sixers (and the home fans) continued to like the look of that matchup. Fouls became an early problem for Brooklyn, too. Embiid sealed Simmons in the paint and drew a foul on him at the 9:07 mark of the first quarter. Brooklyn head coach Jacques Vaughn voiced displeasure at his team being called for the night’s first four fouls and was assessed a technical.

Simmons attempted to bother Harden about 35 feet from the hoop but was whistled for his second foul with 5:20 left in the first. The 26-year-old had a minimal impact in his initial run. Simmons was peripheral in Brooklyn’s half-court offense and the Sixers allowed the Nets few true fast-break chances. His only first-half shot of any kind was a close-range righty hook with about 4:30 remaining in the second quarter. He left it short and Embiid scored inside on the ensuing possession.

Irving actually forced the Sixers’ first turnover, intercepting a Harden entry pass to Embiid and then assisting a Joe Harris three-pointer in transition. The seven-time All-Star was the hub of the Nets’ very efficient offense. Brooklyn began 9 for 10 from the floor and knocked off an early nine-point deficit when Curry sunk a corner three on his first possession.

Officiating was often in the spotlight during a physical, strange, high-scoring first period. The Sixers made all 13 of their first-quarter free throws, while the Nets went 9 for 12. Harden got an odd, harsh technical when he tossed the ball into the basket stanchion following a made Claxton foul shot. Embiid and Claxton didn’t appear to begin the evening on especially friendly terms and both picked up technical fouls late in the first. The stoppage-stuffed quarter finished with zero difference between the teams — 41-all after 12 minutes.

Shake Milton also played an integral role in the Sixers’ success late in the first and early in the second quarter with an all-bench lineup. Milton attacked in transition, drove regularly into the paint, and made it obvious that Maxey wasn’t the Sixers’ only real second-unit scoring threat. He even snared an offensive board before setting up a Maxey triple that dropped following an extremely generous bounce.

Maxey then shook Edmond Sumner and created space to make another three, putting the Sixers up 59-52. That shot gave him 16 points on 6-for-8 shooting in a mere 10 minutes of playing time. If you’re seeking instant offense, he’s an outstanding candidate to provide it. Curry is obviously quite strong as an off-the-bench scorer, too. He fired seven three-pointers in the first half and made five of them. A couple of those looks were inexcusably open, but Curry also made one three through a Maxey foul and burned Tobias Harris with his pump fake before draining another.

Matisse Thybulle gave the Sixers some good possessions against Irving and hit a wide-open three-pointer. While his natural, gamble-heavy style doesn’t lend itself to flawless basketball, the idea of Thybulle as a player who could help in the playoffs rests on him playing disruptive, high-level defense against opposing stars. He checked that box Wednesday while chipping in 10 points in his 12 minutes.

Sixers squeak by in shootout
The Sixers had an unfocused start to the third quarter. Harden plowed over Simmons for an offensive foul and Embiid was whistled for two quick fouls against Claxton.

Of course, Embiid being Embiid, he also drew three fouls on Claxton early in the third and helped ensure the Sixers’ offense didn’t lose any serious steam. Claxton played an impressive game on both ends of the floor, though, despite not being in Embiid’s league as far as physical strength.

However, there was little to like for the Nets defensively through three quarters. They turned to a zone early in the third quarter, which was reasonable given how well the Sixers were switch-hunting. De’Anthony Melton (19 points, three blocks) drove into the middle and converted a smooth finger roll. On the Sixers’ next possession, Harden found Tobias Harris in the high post and he made an easy jumper. Regardless of scheme, the Sixers looked capable of exploiting soft spots or favorable matchups on almost every possession.

They made plenty of tough shots as well. Harden grew the Sixers’ advantage to 15 points when he sized up Claxton and drilled a contested step-back jumper. Embiid pulled out his emphatic, hip-thrusting, professional wrestling-inspired celebration following an and-one layup.

As for Simmons, he increased his offensive aggression in the third quarter, making a righty hook and two free throws. Before Wednesday, Simmons had gone 23 for 53 (43.4 percent) at the foul line this season. He went 2 for 3 in the game before sitting out the final 8:57.

The Sixers’ bench couldn’t replicate its first-half performance. Thybulle and Milton missed corner threes against the Brooklyn zone and a long-range Yuta Watanabe jumper cut the Nets’ deficit to 102-94. Thybulle had an important answer, though, making another open three. He also slammed in a dunk after cutting along the baseline and catching a Maxey lob.

With Embiid watching on the bench, Georges Niang stirred up a bit of drama with Simmons. After Simmons was called for traveling under tight defense from Niang, the sharpshooting Sixers forward got in Simmons’ face, which provoked a shove back that the officials deemed worthy of a technical.

While that moment likely felt like a personal win for Niang, the Nets kept on scoring at a high rate and trimmed the Sixers’ lead to six points on a Markieff Morris jumper over Harden. Tobias Harris alleviated the momentary concern by recording five straight points (a tough jumper and an-one layup) against Watanabe and Maxey sunk a three … but Brooklyn then responded with an 8-0 run of its own. Stops were generally sparse for both teams.

The Sixers aided the Nets’ comeback effort by having frequent defensive breakdowns and becoming deliberate offensively. Brooklyn’s zone didn’t deeply flummox the Sixers, but it contributed to the team relying on jumpers and playing at an unnecessarily decreased pace. 3 observations after Sixers edge out Nets in shootout, extend win streak to 6seventh three-pointer erased a Nets deficit as high as 17 points, tying the contest at 120-all. Harden then passed up a catch-and-shoot look and was whistled for traveling. The Sixers seemed on the verge of collapse.

At that stage, the game essentially turned into a shootout. Harden made two consecutive threes, Irving scored a spectacular late layup, and offense continued to rule the night. The Sixers ultimately squeaked out the win thanks to a couple of plays unrelated to shotmaking. Harris played strong isolation defense on Curry to force an air ball, then ran the floor hard and scored in transition by tipping in his own miss. Melton grabbed a clutch offensive board before kicking the ball out to Maxey for a three that put the Sixers ahead 131-124.