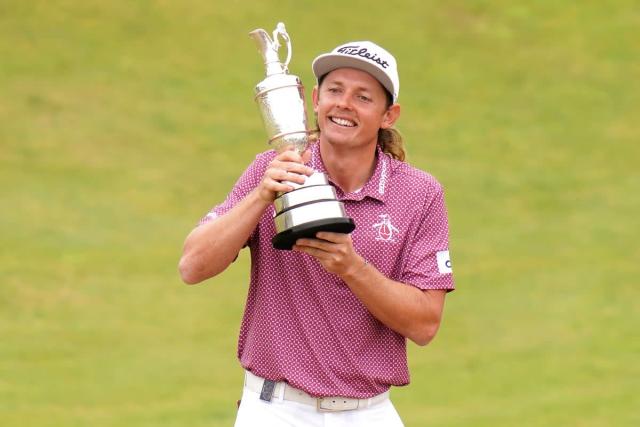 While the whole of St. Andrews was following Rory McIlroy, Cameron Smith, a group ahead, strung together a run of five birdies in a row to leap to the top of the leaderboard through 14 holes. An hour or so later, Smith’s name was being carved into the Claret Jug.

He never blinked once Sunday. The first time he looked slightly rattled was when he held the trophy.

But if there was one thing he never did over these past four days, it was crumble, despite a difficult Saturday.

A day before he was announced as Champion Golfer of the Year, Smith was weighing up where it had all gone wrong. He’d carded a round of 73. He looked dejected. He talked of how the golfing gods had gone against him. He regretted how he had attacked the 13th with gusto, instead of playing it carefully — and walked away with double bogey.

The optimism we saw from him in the first two rounds had momentarily ebbed away, leaving us with what we thought would be a straight shootout between the overnight leaders — McIlroy and Viktor Hovland — for the championship. But Smith hadn’t lost hope — far from it.

“I think I was really frustrated [Saturday] with how the round went,” he said. “I just really put it down to links golf. So I shrugged it off pretty good. I really didn’t dwell on it too much.”

On Sunday, Smith started dancing again, with the Australian support behind him. With the focus elsewhere — mostly on McIlroy — he put together another flawless round just like he did on Friday, shooting 8-under 64 to gate-crash what was meant to be McIlroy’s coronation.

Once Smith had birdied the last hole, he had a 2-shot lead over McIlroy. He walked off to sign his scorecard as the crowd all flocked to the fairway praying for a miracle. But the minute McIlroy’s drive came up short of the green, and his attempt to hole out for an eagle to force a playoff slipped past, Smith emerged from the hut as the winner of golf’s oldest championship. He hugged his caddie and then looked a little lost.

The week of travel was too much of an effort for his father.

“My dad was actually meant to come over, and he pulled out in the last minute,” Smith said. “I had a quick chat with him before. He’s kicking himself now.”

It’s fitting that the 150th edition of The Open played out like the first back in 1860. Back then, the home favorite was Old Tom Morris. He knew the course better than anyone. But then Willie Park came through to win the inaugural championship. We’ve seen this before — like Stewart Cink getting past the darling of the Turnberry crowd, Tom Watson, in 2009. But this should be remembered for Smith’s remarkable weekend and not McIlroy’s near miss. We should look past the romance of what a McIlroy win would’ve meant and focus on Smith’s incredible performance.

Make no mistake about this: Smith deserved to win. The way he negotiated the course Sunday was incredible, especially as he had to reset after the disappointment of Saturday’s round.

It all started with the birdie run, each one majestic. His chip on the 10th from 27 yards out gave him a 5-footer for birdie. On the 11th and 12th he holed out from 16 feet and 11 feet, respectively.

But it was how he navigated the 13th that led him to believe he was going to win the championship. That was his nemesis Saturday. On Sunday, he found the fairway, and then hit a beautiful approach shot from 184 yards to leave him with an 18-foot birdie putt. That one went in, too.

“I think my second shot into 13 was really when I thought that we can win this thing,” he said. “To hit that shot in there, or the two shots, the drive and the second shot, were two of the best all week. For that to go in, I think, that was it for me.”

And then on the 14th he found himself off the back of the green. He turned to the putter, which left him a 5-footer to make it five birdies in row.

“I knew I just had to be patient,” he said. “I felt good all day, and those putts just started going in on that back nine and just got a lot of momentum going.”

If that run of birdies put him in position, it was the way he approached the 17th that arguably won it for him. The infamous Road Hole has ruined hopes. On Sunday, Smith found himself in a spot of bother, finding himself between that famous, dreaded bunker and the green. But he worked his way around it to save par.

His 20 under tied for the best score at a major. He became the fifth golfer to win the Players and a major in the same year, joining Tiger Woods, Jack Nicklaus, Martin Kaymer and Hal Sutton. But realizing the company he now keeps can wait. He said his first priority is to see how many beers he can fit into the Claret Jug.

At this Open, he has spoken about how he’s binging the television series “Peaky Blinders” and “State of Origin.” He has also been taking his bike out for a spin every morning around the coast to get his legs working. It has all helped him stay calm and ready for the championship-winning moments that he eased through Sunday.

But having won, his first emotion was relief.

“I feel I can breathe,” he said soon after.

McIlroy will regroup, but this will hurt. The hotel room he and his family are staying in overlooks the 18th. Every morning he looked out and dreamt of being atop that yellow leaderboard above the grandstand.

McIlroy will have further attempts to end the eight-year wait for his fifth major, but Smith will be enjoying the feeling of winning his first.

Smith’s next challenge is to see if he can stay awake beyond 10 local time this evening. He says he’ll try to drink 20 or so Claret Jugs’ worth of beer even though he is exhausted. The last few days have taken it out of him. The magnitude of what he has achieved hasn’t yet hit home.

“I knew it wasn’t going to be too long before I got one of these,” he said. “I’ve knocked on the door, I think, maybe one too many times now. So it’s nice to get it done.

“It really hasn’t sunk in yet. I don’t think it will for a few weeks. Yeah, it’s just unreal.”