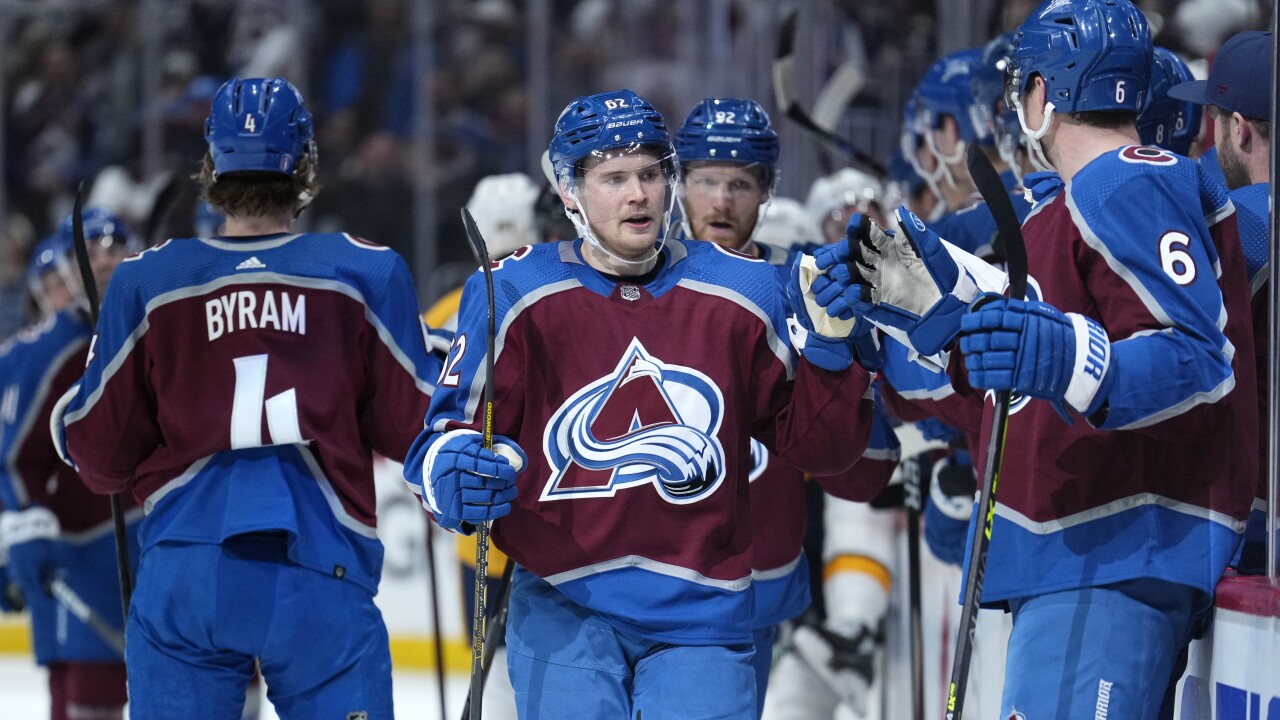 DENVER (AP) — Nathan MacKinnon and Devon Toews scored 22 seconds apart in a five-goal first period, sending the Colorado Avalanche to a 7-2 win over the Nashville Predators on Tuesday night in Game 1 of their first-round playoff series.

The five goals tied the team playoff record for a period and chased Nashville’s backup goaltender David Rittich from the game with 4:56 remaining in the first. Rittich was stepping in for 38-game winner Juuse Saros, who’s sidelined with a lower-body injury.

Andrew Cogliano, Cale Makar and Artturi Lehkonen also scored in the first. Colorado captain Gabriel Landeskog built the lead to 6-0 when he was credited for a goal in the second period. He was making his return from knee surgery that had sidelined him since mid-March.

MacKinnon scored his second goal of the game in the third period and, coupled with an assist, raised his playoff points per game average to 1.41. It trails only Wayne Gretzky (1.84) and Mario Lemieux (1.61), with a minimum of 40 games.

Game 2 is Thursday, which also happens to be Kuemper’s 32nd birthday.

Since moving to Denver, the Avalanche boast a 17-6 record in best-of-seven playoff series when they win the first game. On the flip side, the Predators are 0-7 when starting a best-of-seven series with a road loss.

Colorado scored virtually every way imaginable: On a power play (MacKinnon), short-handed (Cogliano), opposing player kicking it in (Landeskog got the credit for a puck knocked in by defenseman Mark Borowiecki) and, of course, even strength (Toews, Makar, Lehkonen and MacKinnon again).

The Avalanche outshot the Predators by a 45-25 margin.

Things turned chippy after the horn to end the second period. Philip Tomasino got into it with Lehkonen. Close by, Luke Kunin shoved down Nazem Kadri, who got a shot in before being pulled away.

In the third period, the game got even more chippy with Mathieu Olivier drawing a misconduct penalty.

Cogliano scored his first goal for the Avalanche since being acquired from San Jose on March 21. He took advantage of a Mattias Ekholm turnover with the Predators on the power play and lined it in through a small window.

Cogliano later left the game with an upper-body injury.

The sleek move of the game was turned in by Makar, who zipped around Tanner Jeannot with a nifty move near the blue line, skated down the left side and banked in a shot off the mask of Rittich.

Lehkonen’s score to make it 5-0 with 4:56 left in the first and put an end to Rittich’s night. He was replaced by Connor Ingram, who had appeared in only three NHL games before Tuesday. Ingram had 30 saves.

The goals by MacKinnon and Toews were in the first 2:42, making it the fastest pair of goals to start a playoff game in Colorado/Quebec franchise history. The old mark belonged to Valeri Kamensky and Peter Forsberg, who scored in the opening 2:54 during Game 2 of the 1998 conference quarterfinals, according to NHL Stats.

Makar became the third defenseman in team history to record three points in a period during a playoff game. He joined Sandis Ozolinsh (April 13, 2000) and Risto Siltanen (April 14, 1987).

On his 27th birthday, Avs forward Nico Sturm received a hard check in the second period that knocked him down. He had to be helped off the ice, holding his arm, but later returned.