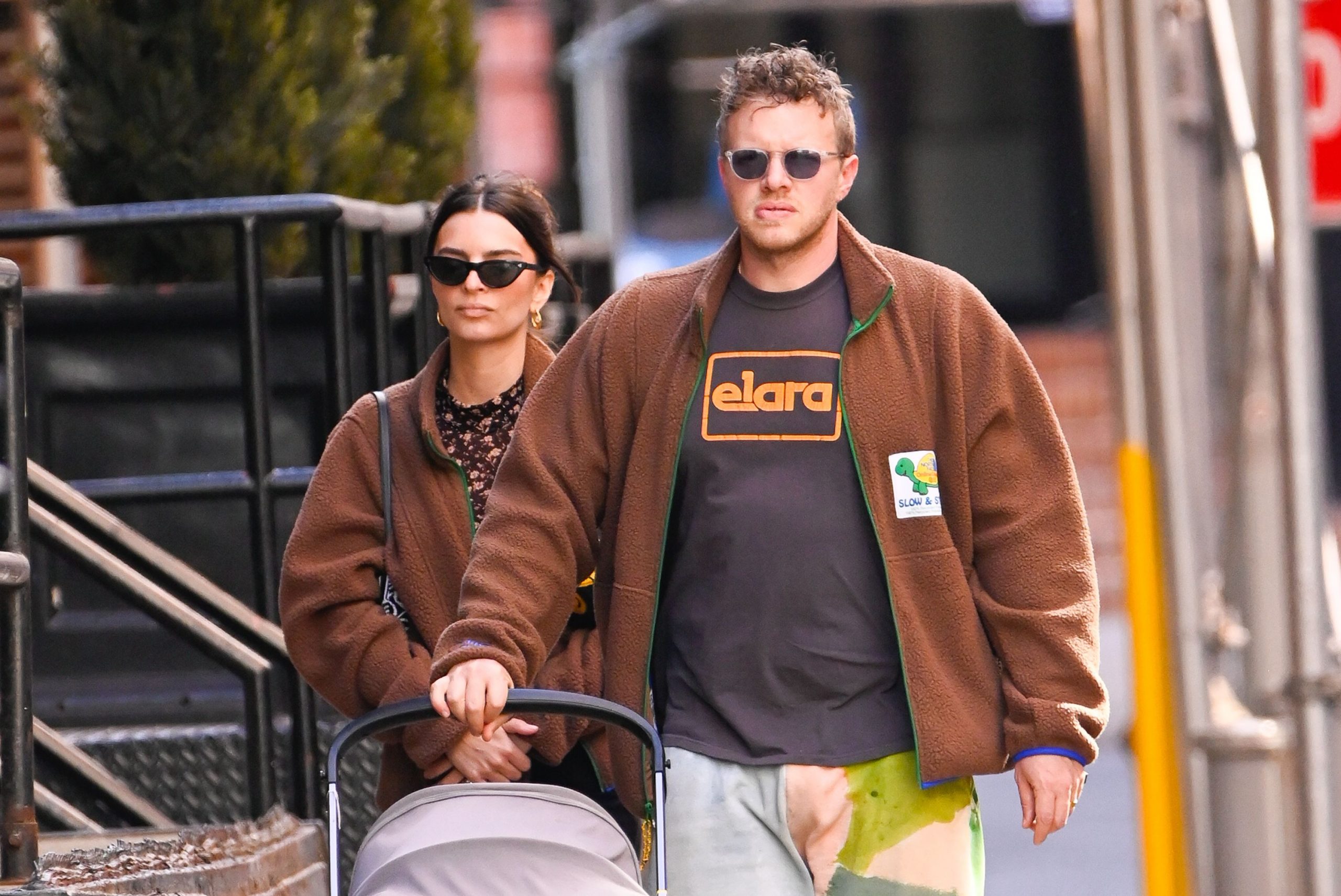 Emily Ratajkowski and Sebastian Bear-McClard stunned fans when they announced their relationship on the day of their wedding in 2018, just days after they were spotted out together for the first time. Four years after their N.Y.C. courthouse wedding ceremony, however, the couple split.

Though the pair are no longer together, they shared major moments during their relationship, including building a family of their own. Throughout their marriage, Ratajkowski posted many of the milestones with Bear-McClard on Instagram, including their honeymoon to Utah and the adoption of their dog, Colombo. In March 2021, the couple welcomed their baby, Sylvester Apollo.

From their city hall marriage to their split, here is a complete breakdown of Emily Ratajkowski and Sebastian Bear-McClard’s relationship.

Photos obtained by the Daily Mail showed Ratajkowski and Bear-McClard being affectionate on Valentine’s Day, prompting fans to assume that the model and her then-boyfriend, music producer Jeff Magid, had ended their relationship.

Although the relationship between Ratajkowski and Bear-McClard seemed to form quickly, Ratajkowski later shared on Busy Tonight with Busy Phillips that the two had known each other for years before the official start of their relationship. “We knew each other for a long time before and he likes to joke ‘yeah everyone thinks we got married quickly, but you vetted me for two years,’ ” she revealed on the show.

While out to dinner at N.Y.C. restaurant Minetta Tavern in 2018, Bear-McClard proposed to Ratajkowski with no ring in hand. Ratajkowski recalled on The Tonight Show with Jimmy Fallon that after initially declining the ringless proposal, Bear-McClard used the paperclip on the bill from dinner to craft a ring she accepted.

The couple decided to design their own wedding bands using an ounce of gold purchased in China Town and turned to a jewelry designer for help. The model told Fallon, “We came into his studio after hours and we actually hammered them out, the whole thing, used a little blow torch.” Ratajkowski explained that the rings were supposed to be temporary but the pair ended up forming a personal connection with their handmade rings.

The pair opted for a non-traditional wedding ceremony at N.Y.C.’s City Hall. Ratajkowski wanted the wedding day kept secret, which is why she decided to wear a mustard yellow jumpsuit from Zara with a custom-made black wide brim hat in hopes to blend in with the public. The couple’s closest friends, including Instagram famous Josh Ostrovsky a.k.a The Fat Jewish, were in attendance.

Less than a month after the wedding, Ratajkowski and Bear-McClard made their first red carpet appearance at the 33rd Annual Film Independent Spirit Awards in Santa Monica, California.

The newlyweds looked blissful while walking the carpet together. Bear-McClard’s uncle, Peter McClard, told PEOPLE, “We’re proud of him for settling down with Emily and what he’s done and about to do in his film career. He’s a good, caring guy and a great listener and people love working with him because he gets things done.”

Ratajkowski and Bear-McClard traveled to Utah for their honeymoon. The model swam in a pool with nothing but her wedding ring on and posed by the fire with a Utah sunset in the background.

The honeymooners stayed at Amangiri resort in Canyon Point, a secluded spot popular among many celebrities.

Post-getaway, Ratajkowski shared two more photos of her in nothing but a straw hat on Instagram. One of the photos showed the model against a wall with the caption, “Posing for my husband like,” and the other of her laying on a daybed by the pool with the caption, “Take me back.”

A little less than five months after their wedding, Bear-McClard gifted Ratajkowski a new engagement ring. She shared the diamond Toi et Moi ring on Instagram with Bear-McClard smiling in the background.

The ring, along with her handmade wedding band, was also the star in another picture posted on Instagram, this time a selfie.

The couple were constantly affectionate toward each other both in public and on social media. In October 2018, Ratajkowski shared a photo of the two locking lips with the caption, “We gross & tbh idc.”

In a now-deleted post, Ratajkowski shared a photo of the two laughing with Bear-McClard’s arm around her while sitting in a booth at a restaurant. She captioned the photo, “HBD husband. I love you more everyday.”

The pair decided to expand their family when they welcomed their dog, Colombo, into their home. In a now-deleted post, the couple laid in bed with their new puppy. “Everyone out here having babies (Kim, Megan, Amy) but we got a new special guy ourselves. It’s a boy! Meet Colombo,” Ratajkowski captioned the image.

Ratajkwoski showed her support for her husband at the Toronto International Film Festival premiere of Uncut Gems, a movie he produced. The model stood close to her husband in a strappy black cutout dress and black flip-flop heels.

The couple flew to the Maldives and Ratajkowski shared many snaps over the course of the vacation, including one of her in the water on Bear-McClard’s shoulders with the caption, “Maldivian chicken.”

In an effort to make quarantine with their friends more exciting, Ratajkowski and Bear-McClard wed their dog, Colombo, to Ostrovsky and his wife’s dog, Happy. The model captioned a photo of the four with their two dogs, “Quarantined together so why not marry our children? They love each other so much. Congrats Happy and Colombo  she wrote.

The group put together a glamorous ceremony when it came to marrying their dogs; the backyard wedding was complete with flower bouquets and glasses of champagne. After the celebration, Ratajkowski wrote, “They’re exhausted,” on a photo she posted to her Instagram Story of the dogs lying near each other on Ratajkowski and Bear-McClard’s living room floor.

Ratajkowski and Bear-McClard announced that they were expecting a baby through an essay she wrote for Vogue. “When my husband and I tell friends that I’m pregnant, their first question after ‘Congratulations’ is almost always ‘Do you know what you want?’ We like to respond that we won’t know the gender until our child is 18 and that they’ll let us know then,” she wrote.

The model continued, “a lot of our life experiences are gendered, and it would be dishonest to try to deny the reality of many of them. But I don’t like that we force gender-based preconceptions onto people, let alone babies. I want to be a parent who allows my child to show themself to me. And yet I realize that while I may hope my child can determine their own place in the world, they will, no matter what, be faced with the undeniable constraints and constructions of gender before they can speak or, hell, even be born.”

Ratajkowski shared two photos of Bear-McClard kissing her belly, one in black-and-white and one in color, with the caption, “🤍.”

After revealing her pregnancy to the public, Ratajkowski’s Instagram was no stranger to baby bump pictures. In another photo, Ratajkowski posed nude in her mirror to showcase her bare bump and wrote, “Sometimes I feel like Winnie the Pooh in human form, other times like a fertility goddess with a juicy butt. I took this on a day where I was feeling the latter. Either way I know I’m going to miss this bump and those kicks very soon.”

The couple announced the birth of their baby, Sylvester Apollo Bear, who was born on March 8, 2021.

The new mom captioned the photo,”Sylvester Apollo Bear has joined us earth side. Sly arrived 3/8/21 on the most surreal, beautiful, and love-filled morning of my life.”

Six months after Sylvester’s birth, Ratajkowski revealed his full face to the public, as she had previously kept her baby’s face hidden in her Instagram posts. The picture showed Sylvester in a sweater embroidered with his nickname “Sly.”

While celebrating her 30th birthday in Turks and Caicos with her husband, Ratajkowski shared a series of snaps, some of which showed her breastfeeding her new baby and enjoying the beach with Bear-McClard.

The model released her book, My Body, in November 2021, where she opened up about her childhood, her marriage and the insecurities she carries in her adult life.

When My Body became a New York Times best-seller, Ratajkowski shared a series of photos to her Instagram to celebrate. She captioned the post, “My Body is a NEW YORK TIMES BESTSELLER! This has been a surreal week. Thank you to everyone who has read the book and sent me messages about how my story has resonated with them. Link in bio to get your copy!”

Ratajkowski shared many snaps of the couple’s child on her Instagram Story for his birthday including a selfie of Ratajkowski and Bear-McClard snuggled up to Sylvester outside in winter attire. She captioned the post, “we love being your parents.”

After four years of marriage, Ratajkowski and Bear-McClard split. A source told PEOPLE, “They split recently. It was Em’s decision. She is doing okay. She is strong and focused on her son. She loves being a mom.”