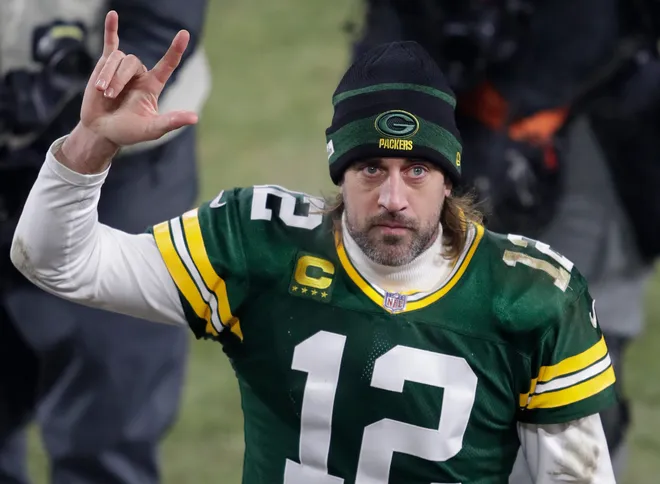 ORCHARD PARK, N.Y. – There were items to like in the Packers’ performance Sunday night in Buffalo, but not enough of them.

There was still plenty not to like, and that’s why they came up short again.

Following the 27-17 loss to the Bills at Highmark Stadium, both quarterback Aaron Rodgers and Head Coach Matt LaFleur were pleased with the Packers’ running game, but it came with a big caveat.

As Aaron Jones’ 143 rushing yards led the way to 208 for the team, the newly configured offensive line (and a substitute) had its moments up front.

But all that success didn’t set up the passing game the way it should, and the Packers continued to sputter with horizontal throws, protection breakdowns, and little efficiency over the middle.

Multiple times, LaFleur referenced the failed fourth-and-1 early in the fourth quarter as the embodiment of the struggles. The Bills loaded up to stop the run in a clutch situation, didn’t fear the pass, and Jones got stuffed when the offense absolutely needed a yard, down 17 and in scoring territory.

“Do I think we showed some physicality in the run game? Absolutely, I think we did,” LaFleur said. “We need that every week, because that is one of the premier defenses in this league. We knew it was going to be a grind of a game.

“I do think there’s something to just having the mix, the threat, because otherwise – the fourth down is a great representation of that – you start getting everybody up in there, you have to be able to throw it over their head from time to time as well.”

“We’re going to have to push the ball down the field in order to win games in this league,” he said.

Another thing the team’s foremost leaders liked was the vibe. Great practices, solid preparation, a loose and positive attitude despite all the difficulties getting wins.

LaFleur said it’s weeks like this past one that can help get the season back on track, and Rodgers felt the team wasn’t carrying itself like one on a losing streak, which was important.

“The energy in the pregame, in the locker room, was different,” he said. “It felt like ‘Packers’ again. I felt like, for whatever reason, we didn’t have the confidence for a few weeks. We weren’t playing with a lot of energy, weren’t amped up before the game.

“So, I like the way we felt before the game. Maybe it was Sunday Night Football, maybe it was being counted out, maybe it was this environment. But that’s encouraging.”

Only all it got them was a 24-7 halftime deficit against a really, really good team.

“The play in the first half wasn’t very encouraging,” Rodgers said.

“We’ve got to help our defense out a little better early in the game. When we went on a run back in ’16, we started those games faster so we could play more one-dimensionally on defense. We just haven’t done that. We haven’t put up any points early in games to get our defense to have a chance to pin their ears back and get after the passer.”

The back and forth is, unfortunately, turning into the story of the season. Some of the ups and downs are beyond anyone’s control, like the injuries. Others are within a grasp they can’t seem to find in key moments, such as penalties.

The right vibe off the field hasn’t produced the right discipline on it.

“That’s kind of what’s been going on with us,” Rodgers said. “Throw a touchdown to Bobby, get a penalty. Come back, have a big kickoff return, have a penalty. Think we’re getting all our guys back for a week and then somebody’s out.

“So, nobody feels sorry for us. We’ve got to find a way to get one win. I feel like if we can just get one, then the whole momentum changes.”

It’ll take more than that, of course, but the Packers have to start somewhere. Rodgers suggested maybe he’ll have some words of wisdom come Wednesday, but he doesn’t want to force it, either.