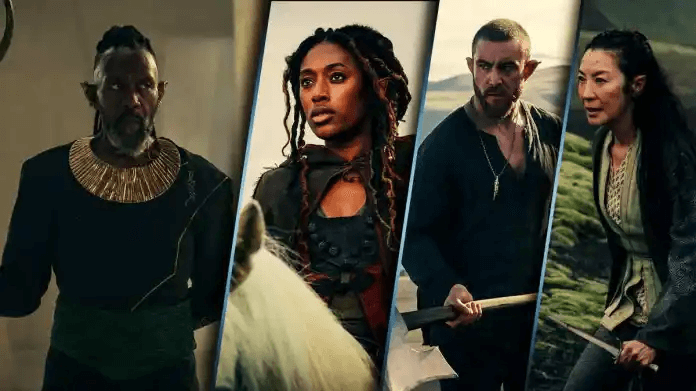 The Witcher: Blood Origin features a surprising post-credits scene helping tie this story in to the main series ahead of The Witcher season 3.

While The Witcher: Blood Origin is set 1200 years before the events of The Witcher, the prequel still leaves many untied threads the main series will definitely explore in the future. The spinoff prequel tells the story of the Seven, a group of heroes who band together to defeat the Golden Empire and end up causing the Conjunction of the Spheres, so Blood Origin already helps to explain the estate of the Continent during the main series. However, the spinoff also introduced new characters that’ll return for The Witcher, probably in Season 3.

Unfortunately, The Witcher: Blood Origin feels rushed and bloated for trying to fit so many important plot points and key characters in just four episodes. That means it’s okay to be confused when the credits roll and feel like you’ve missed something hidden in the show’s final scenes. So, let’s break down what happens in The Witcher: Blood Origin’s ending and explain what all of that means for the future.

The Fall of the Golden Empire

In the final episode of The Witcher: Blood Origin, the Seven achieve their goal of toppling the Golden Empire by igniting the flame of revolution in the hearts of the lowborn. Tired of being oppressed by the Golden Empire and left hungry on the streets of Xin’trea, the people rise after an inspiring speech by Éile (Sophia Brown), the Lark. The lowborn’s insurrection allows the Seven to infiltrate the palace, take down Empress Merwyn (Mirren Mack), kill the Empress’ monstrous bodyguard, and destroy the central monolith in Xin’trea.

All these events happen in just a few minutes, but they all have enduring repercussions. That’s because, while the Seven gave Elfikind a reason to dream of a better world, one of the consequences of destroying the Golden Empire is the arrival of humans on the Continent, who, for the next centuries, would decimate the Elvish population and build their kingdoms over the ruins of the Golden Empire.

The Conjunction of the Spheres

One of the goals of the Seven is to destroy the central Monolith High Mage Balor (Lenny Henry) wants to use to draw forbidden power from other dimensions. By the time the Seven get to the Golden Empire’s capital, Balor already controls Chaos Magic, making him a foe no one can defeat in direct combat. That’s why Zacaré (Lizzie Annis) uses her binding spell to connect Balor and her brother Syndrill (Zach Wyatt), so they can harness the Chaos Magic and use it against the Monolith itself. Syndrill gives his life for the cause, but he manages to shatter the giant structure and take Balor down with him.

What the Seven didn’t expect was the Conjunction of the Spheres. After the Monolith is shattered, multiple dimensions converge in the same point of space-time for a brief moment. As a result, creatures from different worlds end up on the Continent. That’s where the monsters of The Witcher universe comes from, and their threat will lead to the creation of the mystic monster hunters.

The Conjunction of the Spheres also brought humans to the Continent, a race of warmongering conquerors that would spread through the lands like cancer and put Elfkind at risk. The main series still deals with the consequences of the Conjunction of the Spheres, showing how non-human warriors of the Continent joined the Scoia’tael, a group of rebels who fight against human oppression.

The Death of the First Witcher

Blood Origin also features the creation of the first prototype of a Witcher. By uniting their spells and knowledge, celestial siblings Zacaré and Syndrill use the heart of a beast found in a different dimension with one of the Seven’s warrior, Fjall (Laurence O’Fuarain). Fjall goes through the painful process of the Trial of the Grasses, a ritual where many different elixirs break his mind and body. After that, he fused with the creature’s heart and became a monster. Fjall is faster, stronger, and more resilient than any Elf, has enhanced senses, and ultimately proves to be uncontrollable.

Fjall tries to keep his rage in check, only unleashing his full power when facing the Golden Empire’s monster. Fjall ultimately slays the beast, but he’s too far gone by then. After killing his foe, Fjall turns his gaze to his friends, killing the leader of the sellswords that helped the Seven and ripping one of Callan’s (Huw Novelli) eye out. Despite being in love with Fjall, Éile is forced to kill him.

The rituals Syndrill and Zacaré used to create the first prototype of monster-slayer would remain hidden for centuries until someone discovered the Trial of the Grasses and used it to find the order of the Witchers. However, Fjall and Éile’s love would endure after his death in the shape of a baby. That’s because Éile got pregnant after having sex with Fjall after his transformation, giving birth to a bloodline touched by destiny.

By the end of The Witcher: Blood Origin, Éile and Meldof (Francesca Mills) try to make a peaceful life for themselves, far away from Xin’trea. Éile asks Ithlinne (Ella Schrey-Yeats), a girl who’s a powerful seer, to touch her belly and predict the future of her child. Ithlinne prophesied her bloodline would endure for many centuries and that a distant descendant of her child would sing the story of the Seven for the last time before witnessing the end of the Continent.

As the series indicates, that descendant is Jaskier (Joey Batey). That’s why Jaskier is tasked by Seanchaí (Minnie Driver) to learn the story of the Seven and spread it so that the Scoia’tael can face the dangers ahead with hope, instead of only anger. We don’t know what is threatening to destroy the Continent during the events of The Witcher, but it might be connected to the Wild Hunt and the Elves who live in a different dimension.

The Wild Hunt Is Coming

In Season 2 of The Witcher, we get a glimpse at the show’s version of the Wild Hunt, a band of interdimensional raiders who kidnap people from other worlds. Blood Origin tells the origin story of the Wild Hunt’s leader, Eredin (Jacob Collins-Levy). In the prequel, Eredin is the High Commander of the Golden Empire. He and his loyal soldiers end up trapped in another dimension by Balor, who betrays him in his quest for power. At the end of Blood Origin, we find out Eredin is wandering a red planet that looks much like the one we saw in Season 2 of The Witcher. He also finds a helmet buried in the sands, indicating this different world was once the home of other people. Eredin will come back to the main series in the near future, probably hunting Ciri (Freya Allan) and her Elder Blood.

Another classic character introduced in Blood Origin is Avallac’h (Samuel Blenkin), an Elf mage who’s a counselor to Empress Merwyn. In the end-credits scene of the prequel, Avallac’h is seen observing Ciri in Cintra, long before she joined Geralt of Rivia (Henry Cavill). The secret for him still looking young after 1200 years is hidden in the last episode of Blood Origin, when Avallac’h reveals he might have found a way to travel through time using Syndrill’s study on Monoliths. Avallac’h observing Ciri means he has an interest in her Elder Blood. That might indicate how Season 3 of The Witcher will incorporate new elements from Andrzej Sapkowski’s original books and CD Projekt Red’s beloved video game franchise.

In The Witcher lore, Avallac’h was supposed to marry Lara Dorren before she fell in love with the human Cregennan of Lod. For those needing to refresh their memory, Lara is the origin of Elder Blood, and a distant relative to Ciri. Besides that, in The Witcher lore, Avallac’h also serves as a royal counselor in Tir ná Lia, the kingdom of the elves from another dimension. That role makes him cross paths with Ciri on multiple occasions, sometimes as a foe, sometimes as a friend. We still don’t know how Netflix will adapt Avallac’h’s story, but the end-credits scene underlines how he’ll become a key character in the main series.