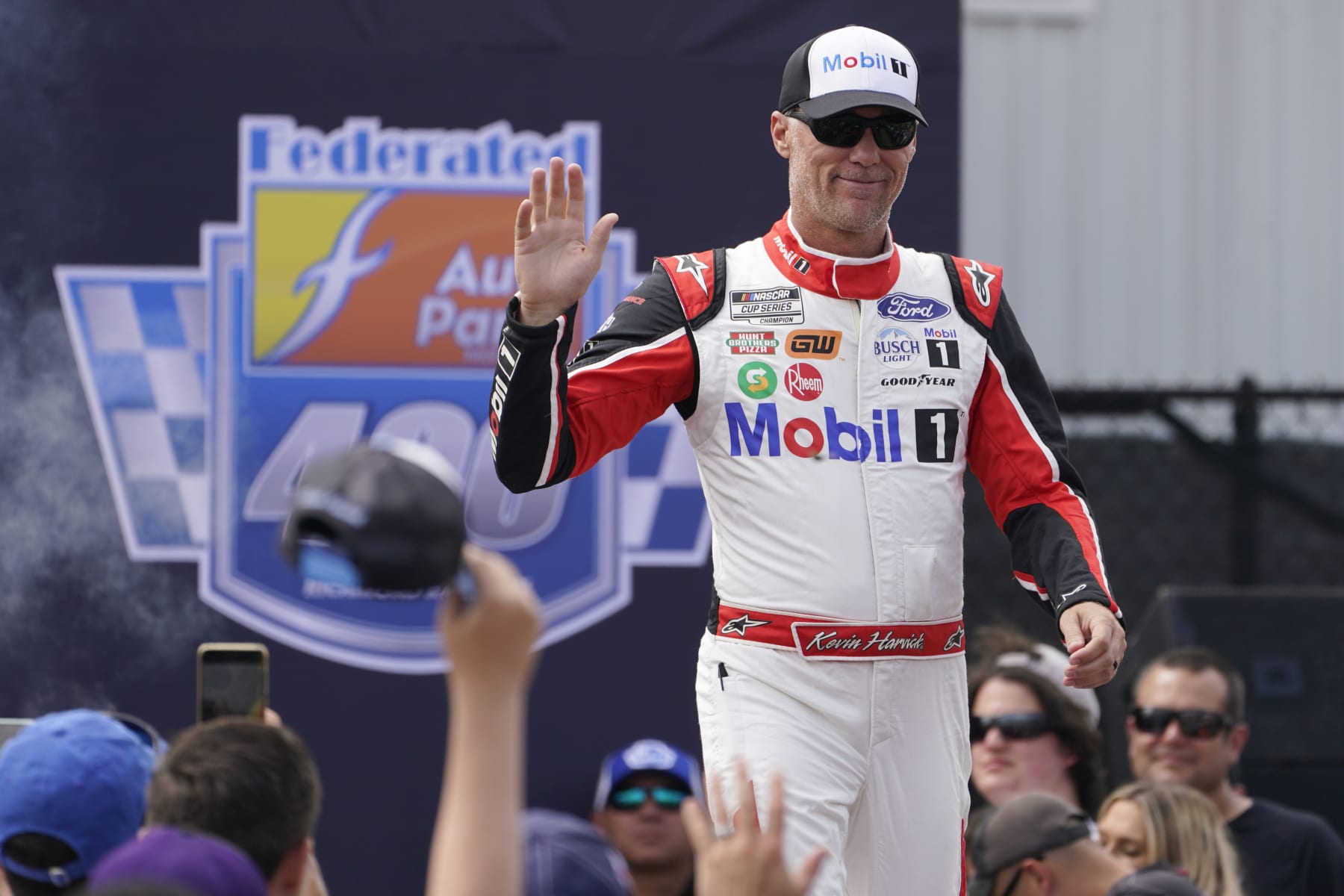 Just eight days ago, the narrative around Kevin Harvick was that he was enduring a winless streak of nearly two full seasons, and that he didn’t seem particularly close to winning with just 13 laps led the entire season. But it’s only taken eight days for Harvick to completely reverse that narrative and perhaps position himself as one of the most dangerous drivers in NASCAR right now.

After taking the lead from a dominant Joey Logano, Harvick paced the field over the last quarter of Sunday’s race and played tire strategy just right to win the Federated Auto Parts 400 at Richmond Raceway, scoring his second straight victory. Harvick fended off a serious challenge from Chris Buescher on the final green flag run, and then survived a charge by Christopher Bell — who was on fresher tires — to hang on and win by a carlength.

Harvick’s win is the 60th of his career, which ties him with Kyle Busch for ninth on NASCAR’s all-time wins list. It’s also his fourth career win at Richmond, joining previous triumphs in 2006, 2011 and 2013.

Just like it did in the springtime, Sunday’s race came down to pit and tire strategy at the end. Chris Buescher made his final pit stop just before Harvick with about 60 laps to go, allowing Buescher to make up the gap between them and challenge for the lead before falling off. But Christopher Bell pitted about a dozen laps later, allowing him to be faster than both of the top two cars in the final 10 laps.

In a similar race in April, Harvick wound up a narrow second to Denny Hamlin. But this time, he was able to hang on even as Bell came from seconds back to chase him down coming to the checkered flag, continuing his sudden surge in momentum toward another playoff run.

Entering Sunday’s race, there was a great deal of focus on the battle for the final open spot in the playoffs between Ryan Blaney and Martin Truex Jr. But instead of one or the other battling for a win, both drivers wound up seeing a potential nightmare scenario — a new winner emerging and knocking both of them below the cut line — almost play out in the closing laps.

Chris Buescher, 23rd in points entering Richmond, saw his car come to life over the final 100 laps as a cloud cover rolled in and made for cooler conditions. After being able to run down both Kevin Harvick and Joey Logano on a long green flag run, Buescher ran down Harvick for the lead on the same tire strategy and almost made the pass for the lead as the two raced in lapped traffic.

Unfortunately for Buescher — and luckily for Blaney and Truex — it wasn’t to be. Buescher would end up fading and finishing third: An excellent run for the driver from Prosper, Texas, but not one that will help him in the big picture of the playoff race.

“I think it’s a little easy with this format to feel like third place doesn’t matter, but it’s nice to be close and to keep progressing and getting better as we’ve gotten through the summer,” Buescher told NBC Sports. “Really neat to finish here, really proud of everybody.

“Just burned the rear tires up. Ultimately, that’s on me. Lapped traffic didn’t do us any favors either, but ultimately just got to keep the rears under it a little bit better so that we can have a little better shot there to get after them for the win.”

With a crisis averted up front, Truex and Blaney were both able to post top-10 finishes, with Truex finishing seventh and Blaney 10th. However, Blaney was able to accumulate enough stage points to build his gap on Truex — Blaney finished sixth in Stage 1 and fifth in Stage 2 — and now holds a 26-point advantage for the final playoff spot with two races left in the regular season.

Ross Chastain vs. The World

After starting on the outside pole, Ross Chastain looked like the driver to beat early in the race, leading 80 laps in all and winning Stage 1. Once again, though, Chastain’s day came to be defined by contact with another driver.

On a Lap 240 restart, Chastain went up the track to give room to Ty Dillon on the bottom, but in doing so slid up into Kyle Busch on Chastain’s outside. Busch would spin out, and then Chastain also got spun from contact with Erik Jones. Four cars were collected in all, with Jones suffering terminal damage.

Busch would end up making the best out of the situation, recovering to finish 10th while Chastain fell all the way back to 18th at the checkered flag — allowing him to keep his wrath from going beyond simple sarcasm.

“We got Chastain’d this week,” Busch told NBC Sports. “We were his victim this week.”

Chastain has probably become a dirty word within the Joe Gibbs Racing fabrication shop, as Chastain has now had on-track run-ins with all JGR drivers this season. In addition to Busch, Chastain has had incidents with Denny Hamlin, Martin Truex Jr., and Christopher Bell just last week at Michigan.

Race for the Playoffs

Five drivers — Alex Bowman (+107), Daniel Suarez (+89), Austin Cindric (+71), Chase Briscoe (+64) and Kurt Busch (out with an injury) — have a spot in the playoff standings due to a win but have yet to clinch a spot on points. Ryan Blaney holds the final spot in the playoffs by 26 points over Martin Truex Jr., and Truex is the only driver with a realistic chance of getting into the playoffs on points.

Aric Almirola (-214), Erik Jones (-226), Bubba Wallace (-249) and everyone else on back will likely have to win one of the two remaining regular season races to make the playoffs.

Joey Logano led a race-high 222 laps, looking like the class of the field in Stage 2 and then through the first part of Stage 3 before the track transitioned from being in full sunlight to under a cloud cover. Logano faded to sixth at the end, but his laps led were a single-race season-high and were the most since he led 234 laps at Martinsville in June 2020.

Aric Almirola recovered admirably from a poor qualifying effort, making his way into the top 10 by mid-race and scoring an eighth-place finish. That gives Almirola his sixth top 10 of the season — more than he scored in all of 2021 — and snaps a string of two straight DNFs.

While Chris Buescher ended up carrying the banner for RFK Racing, Brad Keselowski wasn’t far behind. After a top 10 qualifying effort, Keselowski finished fourth in Stage 1 and came home in 15th, giving him his fourth top 15 in the last five races.

Now racing to try and find a job for 2023, Ty Dillon turned in one of his best runs of the entire season. Dillon ran in the top 15 throughout the day before a commitment line violation, but he was still able to recover enough to finish a respectable 17th.

Ricky Stenhouse Jr. had designs of zigging where everyone else zagged, running long on a cycle of green flag stops in Stage 2 in an effort to make up time on the rest of the field once he got newer tires. Then, Stenhouse missed the commitment line coming to pit road, hit Martin Truex Jr. in the process, and got nabbed for speeding when he did ultimately make it to pit road. He would go on to finish 22nd.

Chase Briscoe got up as high as second in Stage 3, but his day went haywire after a fire developed in his rocker panel that wound up filling his cockpit with smoke — the latest in a series of internal fire issues we’ve seen in the past three weeks. Briscoe lost three laps as his crew worked to put the fire out, leaving him a disappointing 23rd.

The NASCAR Cup Series heads to the Finger Lakes region of Upstate New York and historic Watkins Glen International for next Sunday’s Go Bowling at the Glen. The race is set for 3 p.m. ET on USA Network.