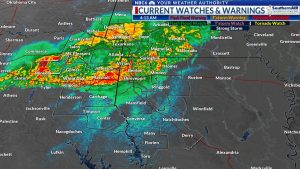 Update: The National Weather Service has expanded the Severe Thunderstorm Watch issued earlier for McCurtain and Red River counties. The watch has been expanded to include the northern half of SW AR and is now in effect until 4 am. The line of storms will begin to move into our area at around midnight and should reach I-30 between 3 & 4 am. Damaging wind will be the main concern with this line as it moves through the area overnight. We will likely see it weaken more rapidly once it begins to move into E TX and NW LA very late tonight.

The rain threat continues: Futurecast shows that we will continue to see lots of clouds Monday night and Tuesday. Along with the clouds, look for scattered showers and thunderstorms to move across the area Monday night. Much of Tuesday will be dry with more scattered thunderstorms developing over parts of the area late Tuesday afternoon and Tuesday evening. We will likely see drier conditions for most of the area Wednesday. That will likely change Thursday.

Our next biggest threat of severe weather: Our next best chance for widespread thunderstorms will likely hold off until Thursday and possibly Thursday night. Severe weather including all severe weather threats will be possible. The Storm Prediction Center indicates that we will have a level 2 ‘slight’ risk of severe storms. Once Thursday’s disturbance clears the area, we will likely see several days of dry weather. Below is the outlook for severe weather for our area from tomorrow through the rest of the week.

Rainfall potential: A look at rainfall potential forecasts from several long-range models below shows that two inches of rain would be a reasonable expectation during the next ten days. It is possible that amounts of one to two inches will be possible over the southern half of the area. The vast majority of this rain will fall between now and Thursday.