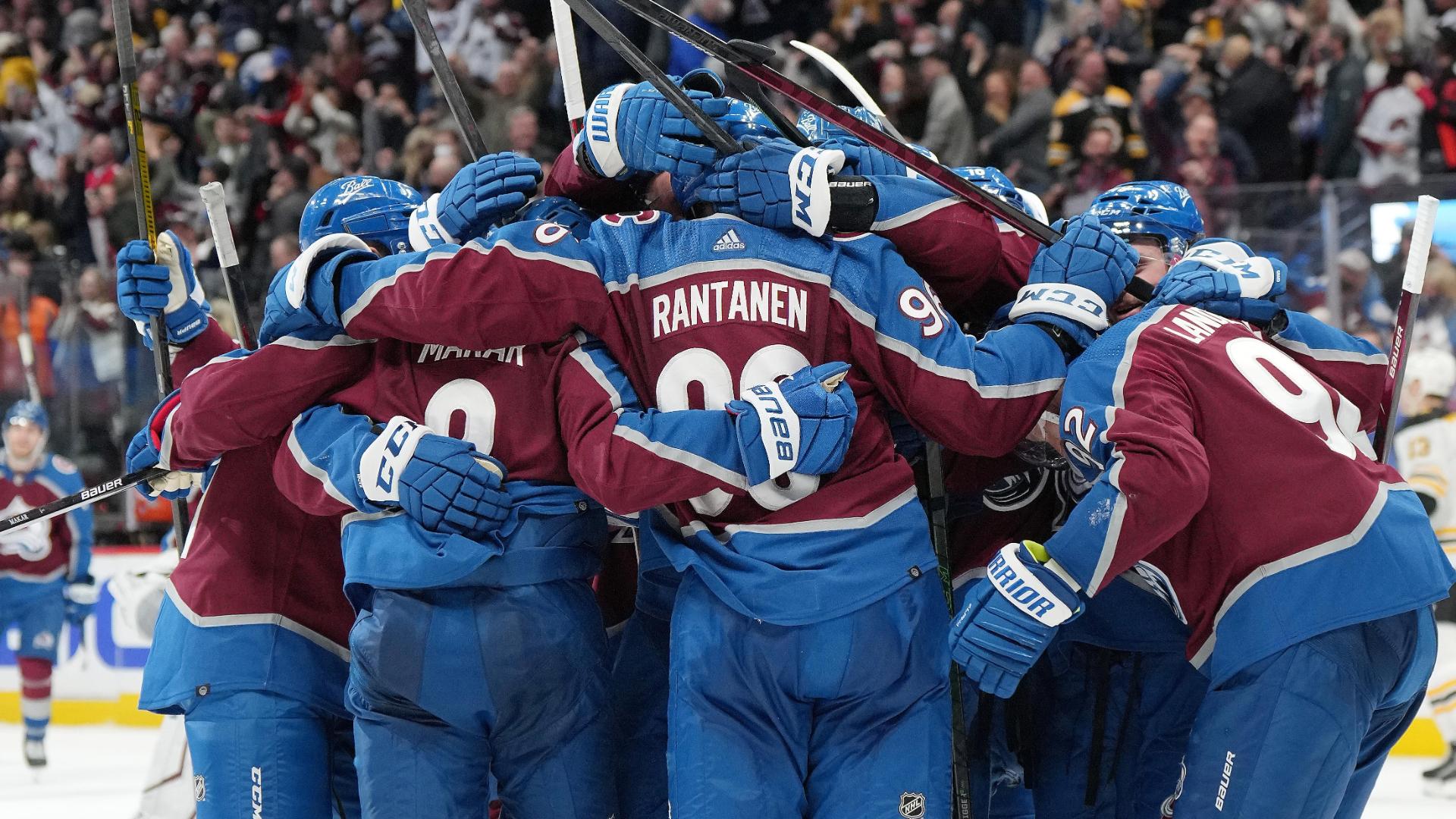 Gabriel Landeskog tied the game with 36.5 seconds left in regulation and Cale Makar scored a power-play goal 3:01 into overtime as the Colorado Avalanche rallied past the Boston Bruins 4-3 on Wednesday night for their 17th straight home victory.

With Mike Reilly serving a tripping penalty, Makar took a feed from Nazem Kadri and sent a shot past Linus Ullmark to give the Avalanche their eighth consecutive win overall.

Colorado, which overcame the loss of star Nathan MacKinnon to a bloody injury in the first period, broke a tie with the 1975-76 Bruins for the fifth-longest home winning streak in NHL history. The record is 23, set by Detroit during the 2011-12 season.

“Not fun seeing one of your best friends and obviously your top player on the ice bleeding like that,” Landeskog said. “We didn’t want to give up. We wanted to keep going. We got the big two points, keeping this thing going at home.”

The Avalanche last lost at home on Nov. 3 to Columbus 5-4 in overtime and have so far lived up to preseason expectations as a Stanley Cup favorite. They’re 13-0-1 this month and have an NHL-best 30 wins.

“With the way our team is built and realizing what contract situations and what the team is going to look like in the next few years, you never know,” Landeskog said. “We feel this is our chance and this is our year. We want to take advantage of it.”

Kurtis MacDermid and Samuel Girard also scored for Colorado. Kadri assisted on the final three goals to give him 39 this season, and Darcy Kuemper made 29 saves.

The Avalanche trailed 3-1 before Girard scored with 8:14 left in the third period. Bednar pulled Kuemper for an extra skater with just more than two minutes left and Kadri sent a nifty cross-ice pass to Landeskog, whose wrist shot beat Ullmark.

“That’s what the extra attacker is out there for. They’ve got an extra guy and they made a good play,” Bruins coach Bruce Cassidy said. “Let’s face it, good seam pass, under pressure. Considering the situation, a lot of guys would just wire that at the net.”

Charlie Coyle and Brad Marchand scored just over a minute apart in the second to put Boston up 3-1, with Coyle’s goal coming on a 5-on-3. Jake DeBrusk also scored, Charlie McAvoy had two assists and Ullmark stopped 35 shots.

“They’re a good team for a reason. They’re not just going to sit back and let us have that in the third,” Coyle said. “I think we expected a push. We wanted to keep playing the same way. They came hard and it’s unfortunate. Linus played such a great game and he deserved better from us in that third.”

The opener of Boston’s three-game trip started with a big hit and plenty of blood. Taylor Hall’s open-ice shoulder shot on MacKinnon caused MacKinnon’s own stick to snap back into his face. Blood gushed from his nose to the ice as MacKinnon lay face down.

MacKinnon, a five-time All-Star, was able to skate off on his own but didn’t return. Bednar said MacKinnon was treated at the arena and when he left to go home before the end of the game he was feeling better. He’ll be evaluated Thursday.

Hall was originally given a five-minute major that was reduced to two minutes after a video review.

“I believe they probably made the right call with the two (minutes),” Bednar said. “But it’s the type of hit, whether it’s really solid or just a glancing blow, it’s the kind of hit the league is trying to get rid of.”

Tuukka Rask, who has allowed 14 goals in four games since rejoining the Bruins after July hip surgery, was the backup goaltender.

“Anybody coming back at any level, it’s going to take a little bit of time,” Cassidy said. “We’re not at the point yet where we’re going to blow everything up.”

Colorado is 23-0-2 when scoring first. … Bruins D Matt Grzelcyk (upper-body injury) went through the morning skate but missed his second straight game. That left Urho Vaakanainen with McAvoy as Boston’s top defensive pairing. … Bruins F Nick Foligno (upper body) didn’t make the trip, but F Anton Blidh returned after a two-game absence. … Boston D Brandon Carlo, who grew up an hour away in Colorado Springs, stayed at his offseason Denver home Tuesday night. “My parents came up and my fiancee and baby are here,” Carlo said.

Bruins: At Arizona on Friday night.