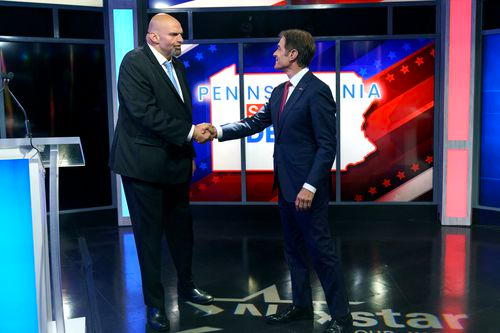 Democrat John Fetterman won Pennsylvania’s pivotal race for U.S. Senate, flipping a Republican-held seat as he recovered from a stroke during the bare-knuckled campaign and giving Democrats hope they can retain control of the closely divided chamber to boost President Joe Biden’s agenda for two more years.

Fetterman’s victory is a significant win for Democrats, representing potentially their only Senate pick up of the cycle. With Democratic incumbents facing tough races in other battleground states, winning Pennsylvania bolsters the party’s hopes to hold on to their no-room-for-error 50-50 majority for another two years.

Fetterman’s campaign took a multipronged approach to trying to beat Oz, painting the wealthy celebrity doctor as out-of-touch and homing in on his longtime New Jersey residency, while also following national Democrats using the Supreme Court’s Roe v. Wade reversal to try to push Oz’s position on abortion into the spotlight.

Oz and his allies meanwhile spent the latter part of the campaign focusing on crime, mirroring a message the party rolled out in congressional races across the country. An ad from MAGA Inc., a super PAC founded by Donald Trump allies, accused Fetterman of wanting “ruthless killers, muggers and rapists back on our streets.”

Control of the U.S. House and Senate were up in the air early Wednesday, as states across the country tallied votes in neck-and-neck midterm election races.

The close contests will determine whether Democrats keep their slim majorities in the House and Senate, or if Republicans will seize control of one or both chambers of the legislature. Democrats will pick up a pivotal Senate seat in Pennsylvania, as Lt. Gov. John Fetterman will defeat Republican Mehmet Oz, NBC News projected. Critical Senate races in Georgia, Wisconsin, Nevada and Arizona were unresolved early Wednesday, according to NBC.

Meanwhile, NBC News did not project control of the House on Tuesday, and an early NBC estimate suggested Republicans could end up with 220 seats — a narrow majority. Republicans came into Election Day hoping to take commanding control of the chamber.

The outcome could make all the difference for President Joe Biden, whose legislative hopes rest on whether Democrats can push his agenda through a hyper-partisan Congress.

Millions of Americans also cast their votes in key races for governor, secretary of state and other offices down the ballot.

Fetterman in his victory speech repeated a line he had deployed over the last two weeks in response to questions about his debate performance.

“This campaign has always been about fighting for everyone who’s ever been gotten knocked down and ever gotten back up,” he said, to applause.

Pennsylvania was one of six open seats Republicans were playing defense on this year as Minority Leader Mitch McConnell saw a stable of his members, and some of his most reliable allies, head for the exits.