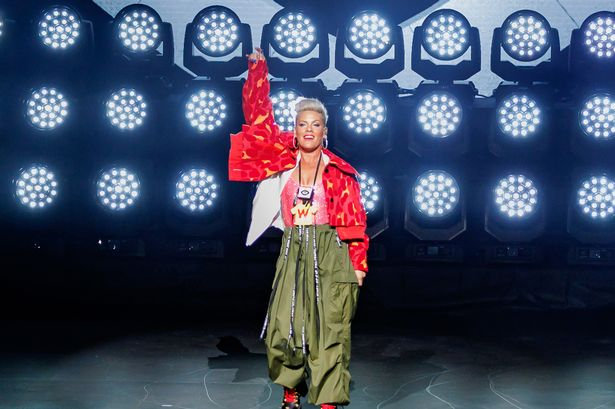 The US superstar will be getting the party started when she returns to Sunderland for two dates on Saturday, June 10 and Sunday, June 11, 2023.

Pink was last in the city in 2010 when she became the first female to headline a gig at the stadium, wowing the crowds with her acrobatic skills.

She’ll be returning with her Summer Carnival tour next summer, with tickets going on sale from 10am on Friday, October 14 from Ticketmaster, AXS, Gigantic and Alt-Tickets.

Tickets will be priced from £45 to £150, subject to booking fee, with hospitality packages also available.

Sunderland will be one of only a handful of UK dates on the tour, with the star also performing at Bolton Stadium, Villa Park and Hyde Park, with support acts due to be announced soon.

Announcing her 2023 European tour, Pink said: “It’s been a long three years and I’ve missed live music so, so much. So, it’s finally time! I am so excited to get back to the UK and Europe to sing, cry, sweat and make new memories with my friends. It’s going to be magical!”

Pink has had a number of anthemic hits over the years, including Get The Party Started, Lady Marmalade, Cover Me In Sunshine, Who Knew, Family Portrait and many more.

After a three year break, gigs returned to the home of the Black Cats last summer and proved a big hit, with Ed Sheeran performing two nights to a record-breaking crowd of 120,000 people.

He was followed later on in June by Elton John who performed his one and only Sunderland date to a sell-out crowd, the first fully-seated gig at the stadium, as part of his Farewell Yellow Brick Road tour.

They join some of the biggest names in music who’ve all played the Stadium of Light over the years, including Oasis, Take That, Rihanna, Kings of Leon, Beyoncé, Coldplay, One Direction, Foo Fighters and many more.

Each gig ploughs millions into the local economy, with pubs, hotels, guest houses and more enjoying a big surge in sales and bookings.

Next year, the infrastructure to support so many visitors to the city will be even greater with new places like the £18m Holiday Inn opening its doors, as well as number of bars and restaurants set to open in 2023.

Sharon Appleby, chief executive of Sunderland BID, said: “Any announcement of international performers coming to Sunderland is great news for the city and for the local economy.

“We are very much now recognised by music promoters as a top class venue and we can see that by the calibre of acts that have come here in recent years.

“The fact that by next year we will have more hotels, more restaurants and generally more attractions in Sunderland means that we can encourage those attending the concerts to stay longer – and, just as importantly, to return.”