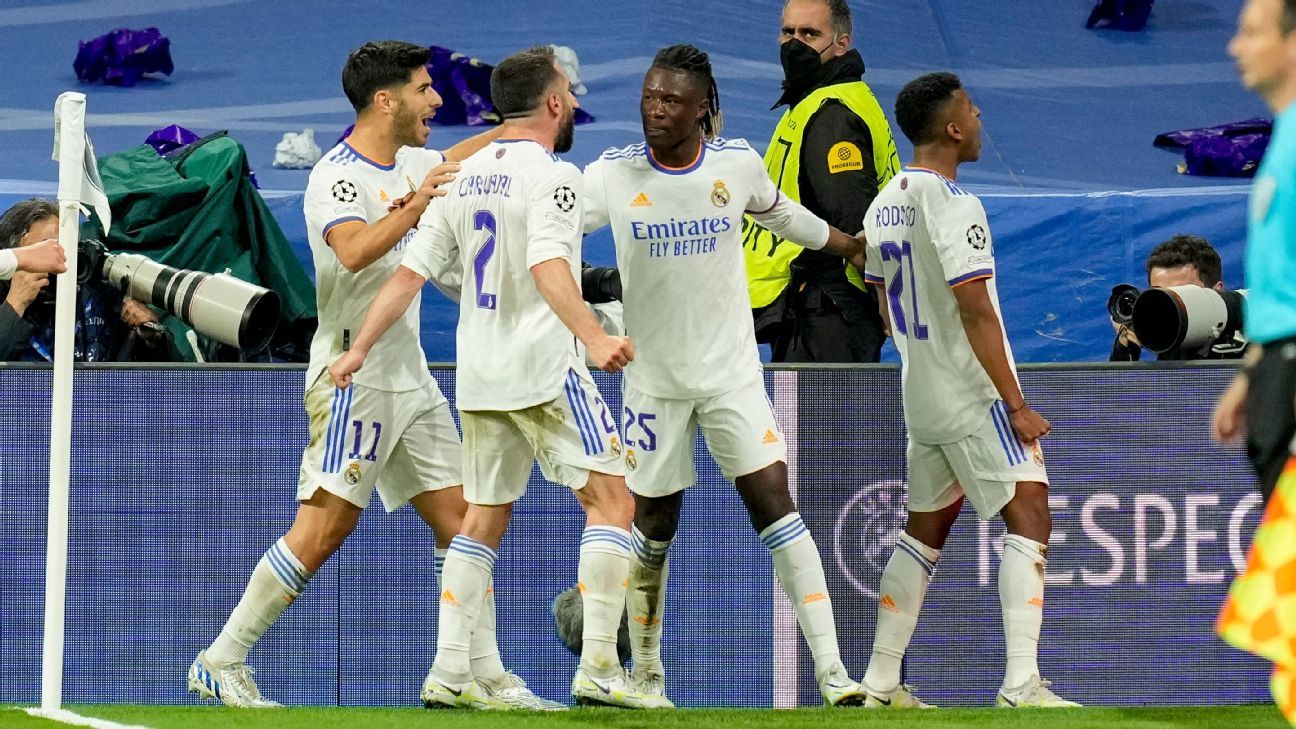 All but beaten in its Champions League semifinal, Madrid scored once, then twice, then a third time to snatch a victory and add to its legend.

Rory Smith
By Rory Smith
May 4, 2022
MADRID — There was nothing. There was no noise. The Santiago Bernabéu stood silent, subdued, waiting for the bell to toll. There was no spark. Real Madrid had long since run out of ideas, and they were running low on hope, too. Most pressingly, there was no time. There were 30 seconds left, plus maybe a little extra purgatory, and then it would be over.

Real Madrid’s campaign in the Champions League this season has run on magic and miracles. The comeback against the glittering array of Instagram influencers arranged in the vague shape of a team by Paris St.-Germain. The revival against Chelsea that hinged on a single, unstoppable pass from Luka Modric.

AS IT HAPPENEDRead our live coverage of Real Madrid’s victory.
But there comes a point when reality has to intrude, when the chaos has to give way to order. There are certain inevitabilities that even Real Madrid, soccer’s great self-actualizers, a team that runs exclusively on the power of its own imagination, have to acknowledge. This was one of them. This was the point where all of it came to an end.

And then, in a single, blinding flash, it happened. There were no warning signs, no rumbles of thunder, no auguries, no harbingers. One minute Manchester City was in complete control of its semifinal, leading by a single goal on the night and by two, a yawning chasm, on aggregate. Jack Grealish had missed a couple of chances to add a little gloss to the score line, but nobody seemed overly concerned.

Then, in a beat, the world turned upside down. With 89 minutes and 30 seconds played, Rodrygo reacted quickest to Karim Benzema’s knockdown and stabbed a shot past Éderson. He gobbled the ball from the back of the net, and sprinted straight back to the halfway line. The Bernabéu stirred to life. There was noise.

On the sideline, the fourth official, Davide Massa, was fumbling with his electronic scoreboard. He lifted it above his head, the number six illuminated in bright, lively green: six more minutes. Now, suddenly, there was time, and it carried hope in its wake. Real Madrid, though, did not need it. It does not work like that. It swept up the field again. Dani Carvajal conjured a cross. There was Rodrygo again, his header flashing past Éderson.

This time, he did not seek out the ball. This time, he raced off, sprinting to the edge of the field, careering as close to the stands as he could. His teammates followed him. The fans poured over each other, a liquid mass, in their delirium. This is exactly what they had been expecting when they had arrived at the stadium a few hours earlier, and still they could not quite conceive of how, exactly, Real Madrid had done it.

Nor, for that matter, could anyone else. It does not seem too florid, too ethereal, to suggest that Real Madrid does not so much beat teams at soccer as overwhelm them by harnessing some elemental force, something that naturally occurs in its environment. Its players spend a considerable portion of their time encouraging their fans to make more noise, whipping them into an ever-increasing Eleusinian frenzy, for that very purpose.

At times, it resembles a form of alchemy, the transformation of a succession of base metals — a smattering of garlanded veterans, a couple of raw hopefuls, a coach with an expressive eyebrow and an easy charm, a team with no recognizable, cogent plan beyond a pervasive sense of its own destiny — into something precious.

Here, though, it was something else, something more akin to a Big Bang. Real Madrid did not particularly like the turn the universe was taking. It did not have any great desire to exist in a dimension in which Manchester City was in the Champions League final and it was not. So it simply, in the blink of an eye, created a new one, one it found much more to its liking.

A few minutes into extra time, Karim Benzema tumbled over Ruben Días’s outstretched leg. The referee, Daniele Orsato, pointed with a theatrical flourish to the penalty spot. Benzema, obviously, scored, because Benzema was always going to score. In the space of five minutes, with a break and a breather in between, Manchester City’s understanding of how things worked had been shattered.

In ‘Nasty, Brutish, and Short,’ Kids Say the Most Epistemological Things

Pep Guardiola’s team is not the first to experience that, of course. It is hard to tell whether it is something about the Bernabéu that does it, or whether it is the effect of feeling like you are living in a self-fulfilling prophecy, but this place has an unrivaled ability to unsettle even the greatest players, the smoothest teams. It scrambles the brain, jumbles the code, shorts the wiring.

It happened to P.S.G., too, when Gianluigi Donnarumma stumbled on the ball and Neymar and Lionel Messi disappeared from view. It happened, too, to Chelsea at the last — or what seemed, until very recently, like the last — with the European champion seemingly coasting to victory and then, without ever really noticing, staring down the barrel of defeat.

City, more than anyone, should have been immune. It is hard to imagine a team more versed in its ideas than Manchester City — though Liverpool would have a case — or a team better equipped to remain steadfast to its principles.

And yet City, too, froze. Even before everything fell apart, it had seemed inhibited, cagey, troubled by something, a reduced version of the team that might — with a little more ruthlessness and a touch more luck — have scored six or seven in the first leg last week. It had only found a little composure after Riyad Mahrez had scored, when the prospect of a place in the final against Liverpool at the end of May was so tantalizingly close.

That, ultimately, is the effect of Real Madrid’s belief. It believes it will win with such conviction that it proves contagious. That is the form its magic takes: it is a glamour, the power to dazzle an opponent, to convince it that the world should be as you see it, as you would want it to be.