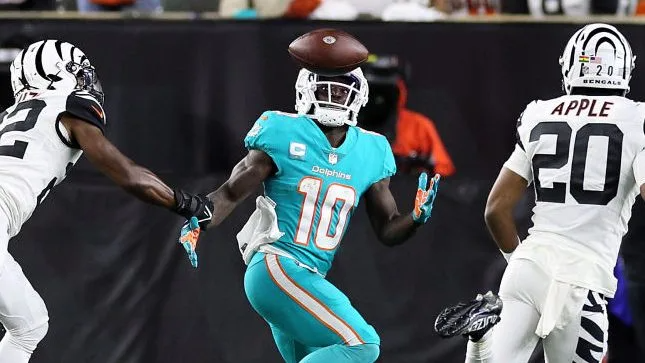 After playing in front of the largest crowd ever to watch the NFL in Cincinnati, the Bengals said they felt the crowd of 67,260 early and often during the 27-15 win over the undefeated Dolphins in the Paycor Stadium White Out.

“I think we have to go to the decibel level to figure out that one,” said middle linebacker Logan Wilson when asked if it was louder than the crowd that serenaded the Bengals’ Wild Card win back in January.

“Unbelievable. When Zac (Taylor) told us it the largest crowd ever, that speak volumes to the crowd. We felt the crowd. Especially in that first quarter when they burned two timeouts because they couldn’t communicate with each other. That’s big time for us on defense. We feed off of that.”

Wilson set off one of the Geiger counters right after the Bengals took a 17-15 lead. With ten minutes left on third-and-one Wilson shot his gap and dropped running back Chase Edmonds for a one-yard loss to force a punt.

“That’s the loudest I’ve ever heard this place in the five years I’ve been here,” said free safety Jessie Bates III and cornerback Eli Apple agreed about his two seasons.

The other cornerback, Chidobe Awuzie, saw during pre-game was injured Dolphins cornerback Byron Jones, a teammate in Dallas, and warned him.

“”It was crazy because one of my old teammates is Byron Jones, and in the pre-game, he was like, ‘Oh, I’ve never really been here (before). Let’s see what the fans have (in store).”’ Awuzie said. “And I said, ‘You’re going to see.’ They definitely brought the energy. It was a beautiful thing to be a part of.”

Quarterback Joe Burrow said he almost went silent count, unheard of in your own stadium.

“I almost had to go to a silence cadence for a second,” Burrow said. “They were fired up after those turnovers, that’s for sure.”

Bengals head coach Zac Taylor rolled out another commercial for the city. He’s now coached the Bengals in front of their two largest home crowds ever, including that Wild Card win back in January over the Raiders.

“People here want to support this team, they want to support a winner, and we owe it to them to be a winner,” Taylor said. “They’re here for us. It shows up when you’re watching cutups from a couple of years ago that, deservingly so, there weren’t many people there. And now, we’ve come this far.

“We’ve earned it. We’ve put in the work to give this fan base something to cheer about, and they’ve shown up and answered the bell as well. These primetime games are special, and we have a tremendous fan base. I know our players and coaches appreciate that. (They’re the) best fans. Where else would you rather be than Cincinnati, Ohio? I’d rather be here.”

When the dust Thursday cleared Hill had 160 yards on ten catches, but they kept him out of the end zone. The other speedster, Jalen Waddle, looked to be limping with a groin problem and had just 39 yards, far below his 100 per game.

“It’s always good to win. Especially this week when it’s a little added with people talking,” Apple said. “But it’s about who leaves the game with a Dub. We did.”

Bates threw a little more into the fire a few days ago when he said tongue in cheek he thought Apple got Hill some Super Bowl tickets and wanted to thank him.

“He came up to me before the first snap and said ‘Where are my tickets?'” Apple said. “It’s all in fun and love. That was pretty funny. He’s a great talent and we had our hands full. But we were able get it. It was a great collective effort.”

NO. 85 ON NO. 85’s NIGHT:  Wide receiver Tee Higgins wasn’t aware that one of Thursday night’s Ring of Honor inductees, the great Isaac Curtis, wore No. 85 from 1973-84. But he did channel Curtis with his coast-to-coast big play (a 59-yard touchdown catch) on a night he had 124 yard on seven catches.

When Curtis wrecked one game in the Super Bowl season in 1981 in San Diego on 147 yards at age 31, fellow wide receiver Cris Collinsworth, in the midst of a huge year along with tight end Dan Ross, marveled at what Curtis did against man-to-man coverage while the Chargers checked other guys.

Which is kind of what happened Thursday.

“We realized really early that they were doubling Tyler Boyd and Chase and playing zero — man-to-man — with me with (Xavien) Howard, (who’s) one of the best corners in the league,” Higgins said. “We talked on the sidelines that I was going to have to win (my matchup), and I delivered. It was a big game for me, and I delivered.”

So did Burrow. He saw what Miami had concocted. And he would praise the O-line for giving him the best protection of his career.

“”They started playing more man. They had a good plan, doubling Ja’Marr a lot and changing their leverages up,” Burrow said. “Certain plays weren’t working. They have good coaches. Our guys went and won one-on-ones, and we took our chances down the field.”

Another 85 was also in the house. Chad Johnson chatted with Chase before the game and told him “to get two touches and 180.”

“Didn’t get it,” said Chase, who still had 81 yards and one of the big plays of the night.

CHASE BACK IN CHASE: Chase patiently waited and got his longest catch of the year, a 36-yarder, with 2:10 left on a go route down the left sideline.

“I was actually looking the safety off to throw to Tee, and I see Ja’Marr out of the corner of my eye wide open,” Burrow said. “I figured I’d throw it to him. I probably should have started on his side.”

Chase said that was one of the times he was one-on-one and he simply flummoxed cornerback Keith Crossen by making him back-pedal off the line.

BELL RINGS TWICE: In his 97th NFL game, safety Vonn Bell had a two-interception game and they came off both Miami quarterbacks. The last Bengal to get two in a game was Wilson nearly a year to the day on Sept. 26 last year in Pittsburgh.

The biggest was the one off Teddy Bridgewater with 3:05 left at the Bengals 9 and the Bengals leading, 20-15.

“I was just at my landmark,” said Bell, helped by Bridgewater’s errant throw.

“It was a hot situation,” Bridgewater said. “I just tried to get the ball out to beat the defender. I didn’t get what I wanted on it — tried to throw it right at (tight end) Mike (Gesicki) — and it just sailed a little bit.”

But his favorite was Tua Tagovailoa’s bomb to Hill in the first quarter that was underthrown and Bell ripped it away.

“The first one for sure. I went over top of Hill,” Bell said.

RELIEF FOR TUA: It was sickening late in the first half when Tua had to be placed on a board with a head injury on a play all nose tackle Josh Tupou was trying to get his first NFL sack of his career in his 44th game. He did, but not before Tua’s head bounced off the turf.

Bridgewater’s thoughts immediately flashed back to another loss against the Bengals, last Dec. 19, in Denver. It was he who left Mile High taped to a board.

“For me personally, there was a lot going through my mind, honestly,” Bridgewater said. “Given that against the same team I was carted off the field, so a lot was going through my mind, but I knew I just had to snap, and try and lead this team to a victory. So many guys were counting on, not only myself, but us to go out there and finish that game, and try to get a win, and ultimately we came up short.”