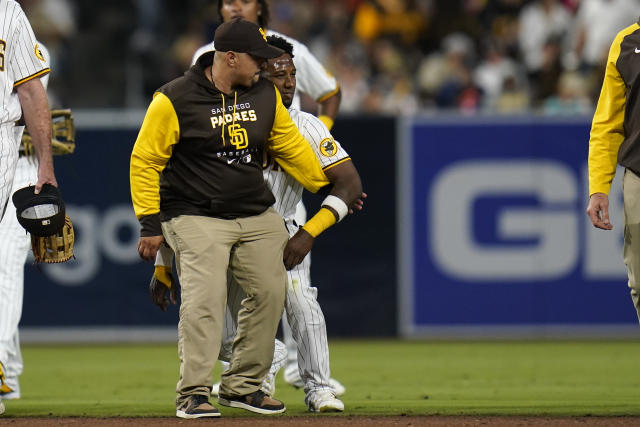 San Diego Padres left fielder Jurickson Profar collapsed as he was trying to walk off the field after a scary collision with rookie shortstop C.J. Abrams during a 2-1, 10-inning victory over the San Francisco Giants on Thursday night.

Profar was eventually strapped onto a stretcher, his neck in a brace, and driven off the field on a cart as his teammates watched from a few feet away. Profar pumped his right fist to acknowledge the cheers of the crowd and appeared to be smiling. He was taken to a hospital and no update was immediately available.

The Padres won it in the 10th on pinch-hitter Jorge Alfaro’s bases-loaded single. Kim Ha-seaong started on second as the automatic runner and Austin Nola was intentionally walked. Kim took third on Trent Grisham’s bunt single. Jarlin Garcia didn’t have a play at third and was late throwing to first. Alfaro then stroked a single to center to win it.

Manny Machado homered for the first time in nearly three weeks and ace Joe Musgrove combined with three relievers on a two-hitter. The Padres won for just the third time in 11 games. The Giants lost for the 13th time in 17 games.

Profar and Abrams both went after a fly ball hit by Tommy La Stella into shallow left field in the fifth inning. Abrams made the catch with his back to the infield and his left knee hit Profar in the left jaw as the left fielder appeared to be positioning himself for a diving catch.

Profar rolled onto his back and was writhing in pain. He was tended to for several minutes and at one point sat up. He attempted to walk off the field, accompanied by trainers, but collapsed just as he got to the infield dirt.

He was on the ground for several more minutes, surrounded by the training staff, before a medical cart arrived. Profar was placed on a stretcher before being driven off on the cart.

Abrams remained in the game.

Machado homered into the second deck in left field off Logan Webb with one out in the fourth. It was his 13th. The slugger’s last homer came on June 18 at Colorado, a game before he sprained his left ankle after slipping on first base. Machado missed nine games before returning to the lineup on June 30.

Musgrove held the Giants to one hit while striking out six and walking four.

Taylor Rogers was one out from his 24th save when he allowed Brandon Crawford’s RBI single to right. That brought in Austin Slater, who reached when he was hit by a pitch on the foot and then stole second.

Webb went eight innings, allowing one run and six hits while striking out two and walking one.

Former team CEO and president Larry Lucchino and former longtime broadcaster Ted Leitner were inducted into the Padres Hall of Fame. Lucchino was the driving force behind the approval and design of Petco Park, which opened in 2004.

Padres: All-Star SS Fernando Tatis Jr. is expected to meet soon with the surgeon who repaired his fractured left wrist in March. Manager Bob Melvin said Tatis could be cleared to begin taking batting practice with no limitations. Tatis has been taking grounders at shortstop as well as fly balls in the outfield among other preparations for his return, which likely will be after the All-Star break. … INF Kim Ha-seong missed his second straight start with a sore left thumb.